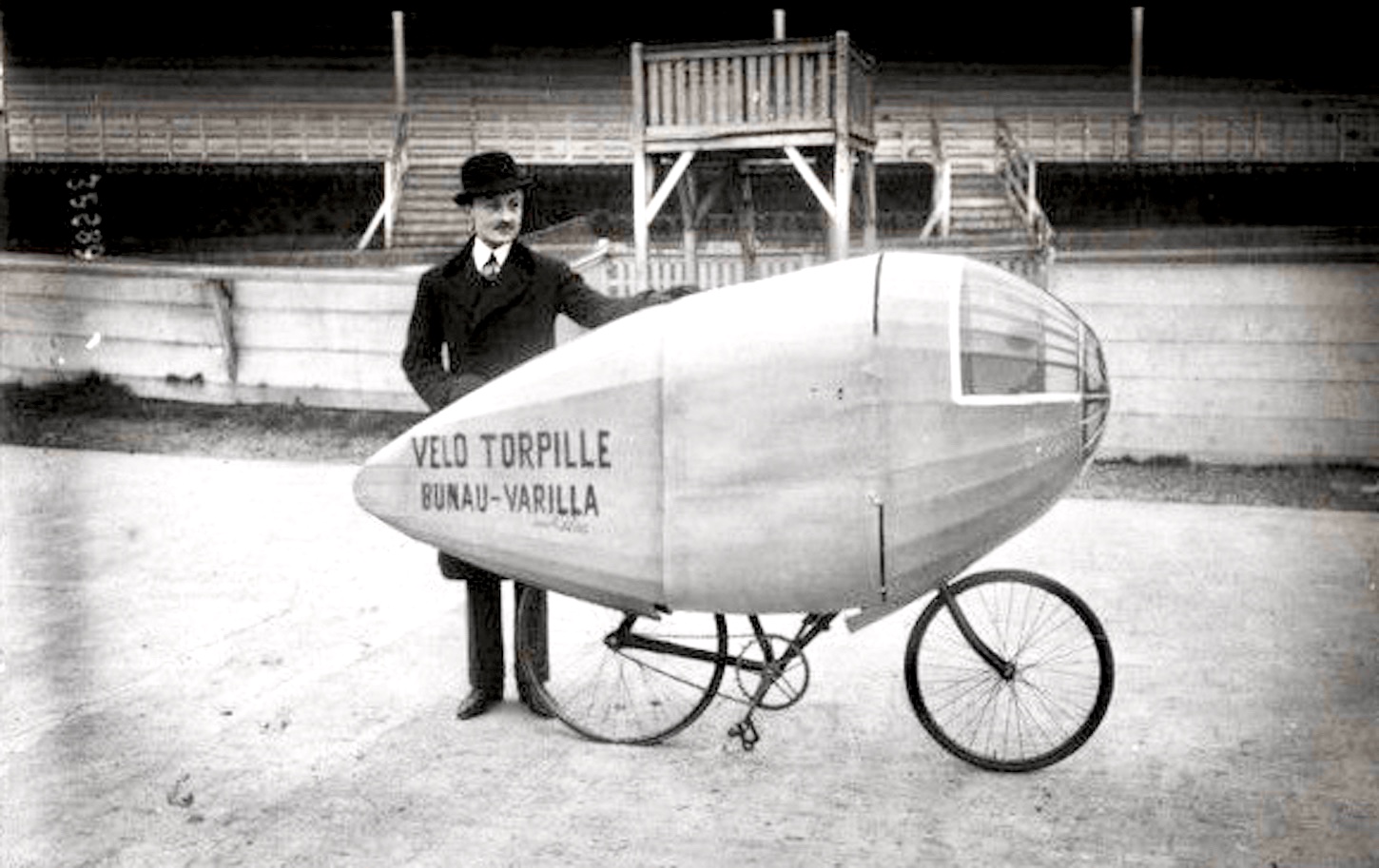 Looking more like an appendage that fell off of a B-52 bomber than a bicycle, the Vélo-Torpille (Torpedo Bike) was the creation of the French engineer Étienne Bunau-Varilla, marking one of the first streamlined bicycles of its kind.

Bunau-Varilla was born in Paris on May 10, 1890, the son of Philippe Bunau-Varilla, a civil engineer who had made an enormous fortune as a contractor during the failed French efforts to build the Panama Canal in the 1880s.

After finishing his “baccalauréat” studies Bunau-Varilla received a Voisin plane as a graduation gift from his father. He later participated in the 1909 Reims meeting, where he was the youngest pilot, flying for the first time just a couple of weeks before the event.

After his flying adventures, Bunau-Varilla became involved in bicycle racing. And, together with the engineer Marcel Riffard (later to become the designer of the famous Caudron racing planes of the 1930s) designed the streamlined, enclosed Vélo-Torpille bike that beat the world speed record, pedaled by world champion Marcel Berthet.

In 1913, Berthet claimed the UCI hour record (cycling’s governing body the Union Cycliste Internationale) on the Vélo-Torpille, establishing a new   benchmark of 43.77 km/h, after averaging a speed of 52.3 km/h. He also established new records in the 1, 5 and 10 kilometer competitions on Bunau-Varilla’s bike as well.

Leading up to 1913, the record was primarily a fight between Berthet and the Swiss cyclist Oscar Egg, which saw the record changed no fewer than six times between the two men.

However, the UCI later decided not to recognize the records Berthet set onboard the Vélo-Torpille, and ban streamlined designs like it from competition all together, making way for Egg to reclaim the record in 1914, who set a new time of 44.247km/h on a conventional bike.

After the UCI’s decision to ban bicycle designs like the Vélo-Torpille, Bunau-Varilla returned to aviation via the French Air Cavalry during WW1, where in May of 1915, he became the first pilot to become a prisoner of war, flying a Voisin bomber together with General de Goys.

An engine failure forced them to land their undamaged plane in German territory near Neustadt during a raid on Ludwigshafen. The general managed to escape, but Bunau-Varilla spent considerable time as a prisoner.

After the war, Bunau-Varilla became captain of the French national skiing team, leading a life of casual splendor in and around ski resorts and motor racing circuits, while occasionally participating in some cycling tours.