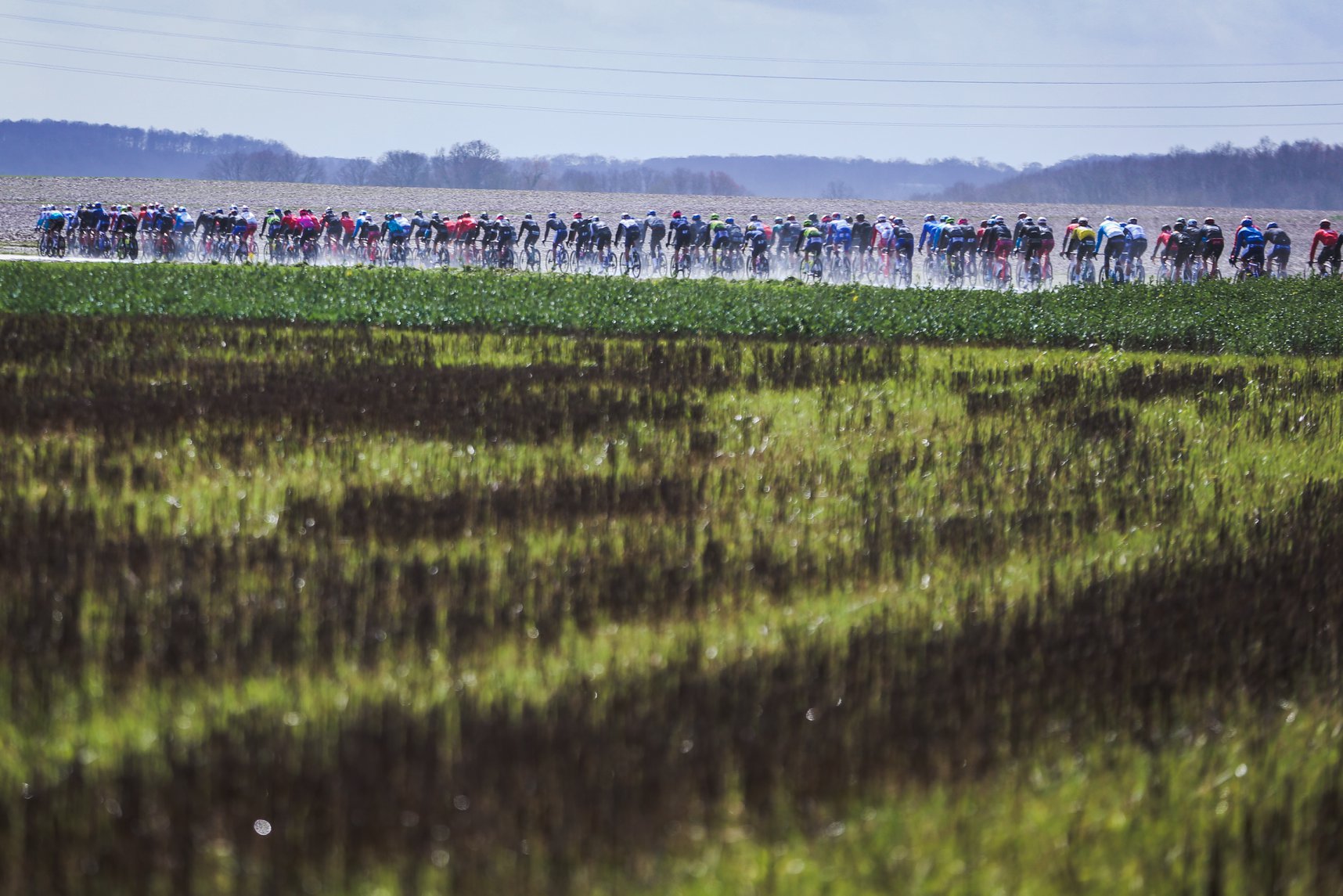 Cortina opened up his sprint with just over 100 meters to go, fending-off a challenge from Peter Sagan (Bora-Hansgrohe) to seize the stage honors.

Meanwhile, Andrea Pasqualon (Circus-Groupe Gobert) grabbed the final spot on the podium, with Max Schachmann (Bora-Hansgrohe) finishing in the front group to retain the yellow jersey ahead of tomorrow’s individual time trial.

After the first intermediate sprint, Devriendt had establish an advantage of 3:20 over the peloton. From there, the Belgian rider continued to steadily increase his lead, eventually reaching a maximum gap of 9:15 at the 38 kilometer mark.

In the meantime, the direction of the wind changed, causing a split in the peloton split after an acceleration at the front of the bunch, leaving some 20 riders trapped at the back, including green jersey Giacomo Nizzolo and polka-dot jersey Jonathan Hivert.

While the bunch regrouped, Devriendt’s lead started to dwindle, especially as he was halted briefly by a level crossing at kilometer 140.

Deceuninck-Quick Step, Team Sunweb and Bahrain-McLaren took turns leading the chase, maintaining a steady pace that finally proved too high for Devriendt, reeling him in with 25 kilometers to go after spending more than 180 kilometers alone out front.

The second intermediate sprint in St. Aout, went to world champion Mads Pedersen (Trek-Segafredo) ahead of Kasper Asgreen and Julian Alaphilippe (Deceuninck-Quick Step), who maintained a high tempo after the line, splitting the pack.

From there, the sprinters teams took turns at the front of the peloton, which was building up to an inevitable sprint finish, while a crash claimed Bryan Coquard, who had just changed bikes with Cyril Gautier after a mechanical problem with 5 kilometers to go.

Meanwhile, Pascal Ackermann (Bora-Hasngrohe) also found himself out of contention for the sprint, after also experiencing a mechanical problem just one kilometer later.

As the stage continued shaping up for a sprint finale, Quick-Step was the dominant team up until the final 500 meters. Indeed, the Belgian squad looked to have put their man Sam Bennett in perfect position as the finish was rapidly approaching. But, Hugo Hofstetter (Israel Start-Up Nation) found himself caught between two wheels and dismounted his bike at high speed, causing Bennett to fall in the process, while Caleb Ewan was brought to a halt in the melee as well.

García was nowhere to be found at the point, but he managed to surge along the right hand side of the road to sneak past Sagan and hit the front, as the former three time world champion was slower to launch his attack.

After a long drag on the front García held onto the front to deny Sagan the victory, with Pasqualon rounding out the podium in third.