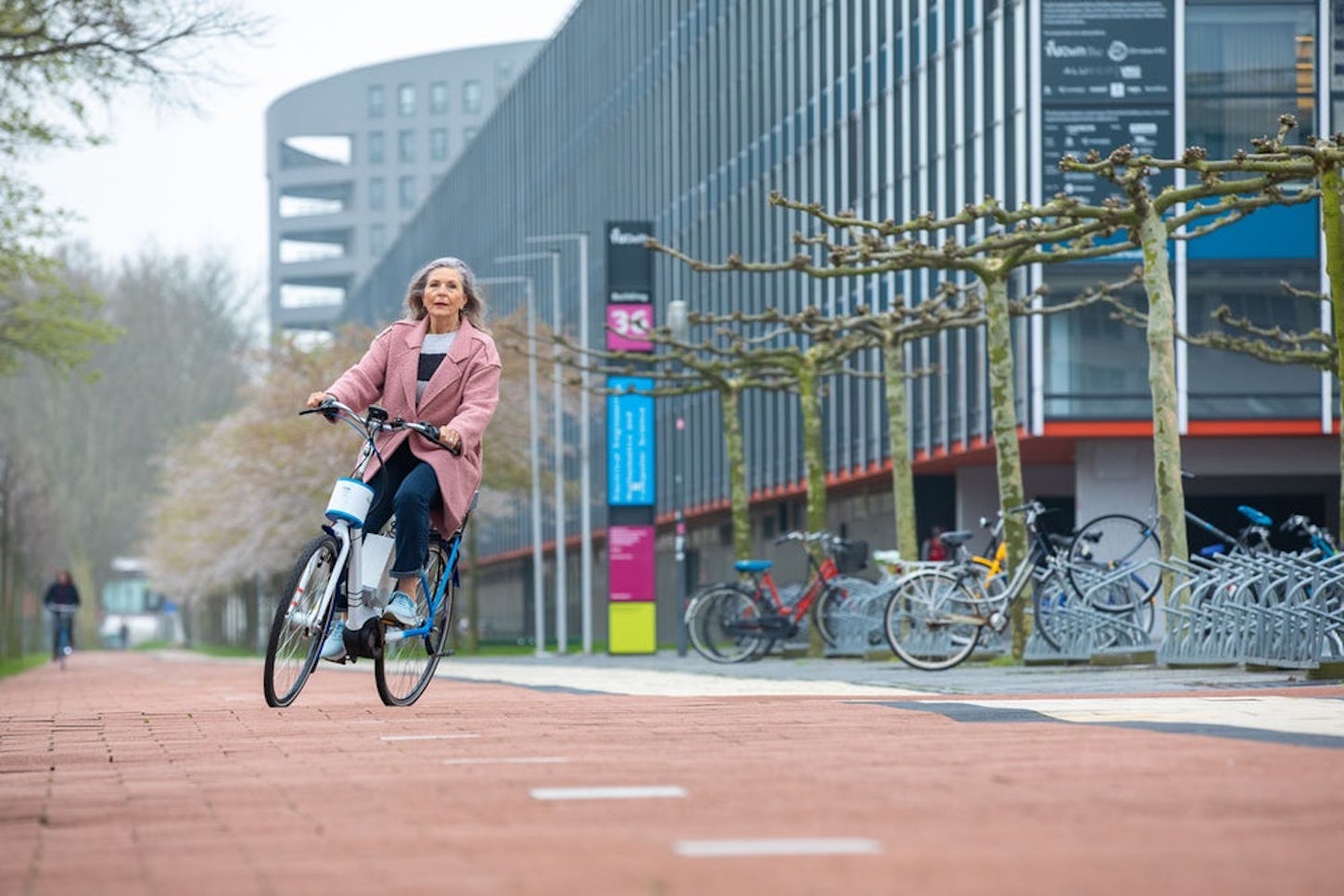 The prototype eBike comprises an inertial measurement unit (an accelerometer/gyroscope combo) that tracks the bike’s movements at speeds over 4 km/h (2.5 mph), wherein the motion data is analyzed by an onboard microprocessor, utilizing a previously-developed mathematical model that predicts bicycle stability based on 25 physical parameters.

If it’s determined that the bike is about to tip over, an electric motor built into the steerer tube will gently turn the handlebars in order to prevent the rider from falling over.

While the technology is still under development, preliminary reports from some test riders suggest the system works.

The prototype system combines the fundamental scientific knowledge of TU Delft with the practical expertise of Gazelle. TU Delft has spent the last 15 years studying why bicycles do or do not fall over.

“We developed a mathematical model with some 25 physical parameters that successfully predicted the stability of a bicycle design at various speeds. We also experimentally proved that the insights behind the theory were correct,” says lead researcher Arend Schwab.

This fundamental knowledge gave them the idea to provide cyclists with active support in the form of a steer-assist system that makes the bicycle more stable. “It’s actually technically quite simple,” says Schwab. “You need a sensor that detects when the bike is falling over, a motor that can adjust the steering and a processor to control the motor. The hardest part is finding the right algorithms for the processor, which was where our scientific research into bicycle stability proved enormously important.”

Much research is still needed before the steer-assist system can be made available to consumers. The prototype is currently being used to test users’ experience of the steer-assist system and to find out what kind of assistance works best. The first results have already revealed that some people find it easier to keep their bike upright with the system.

“We now want to study what kind of assistance is appreciated by the cyclist and when, and of course we will also be testing the safety of the system.”

The follow-up research program is already fully under way. In 2016, TU Delft and Gazelle won the National Sport Innovator Award for the development of the steer-assist bicycle. ‘This was a very important boost for us,’ says Schwab.

“We have now also received a grant from NWO’s Perspective program Citius, Altius, Sanius to spend the next four years improving the system.”

As mentioned above, it may take a few years before the prototype is ready for the market, however smart systems like the steer-assist will certainly become commonplace in the bicycle industry in the coming years, both TU Delft and Gazelle anticipate. Various ways are being sought to enable elderly people to retain independent and active lifestyles and aids that can help them to continue biking safely for longer will have an important role to play.