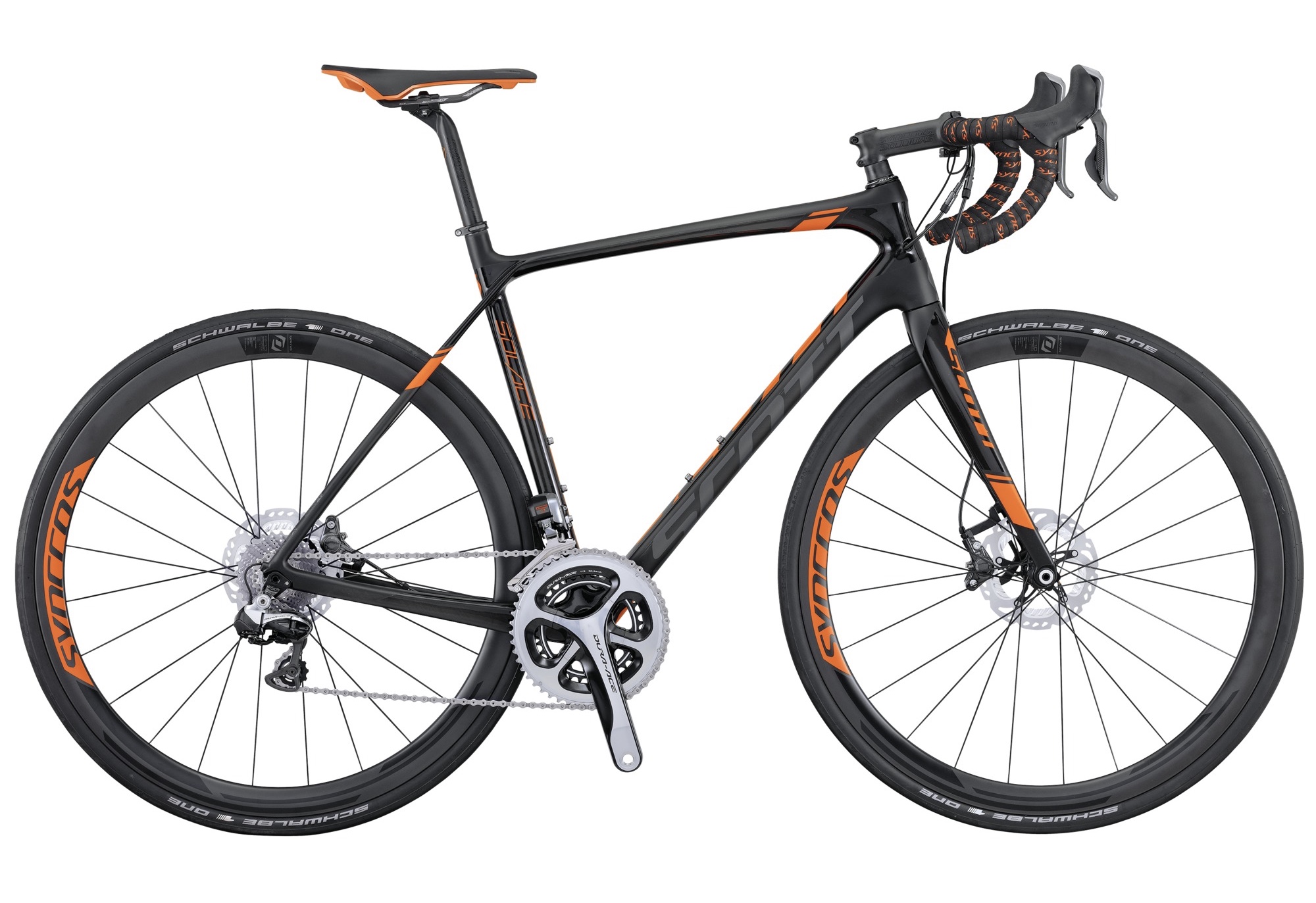 Early this fall I got my paws on a 2015 Scott Solace Disc, the disc brake-equipped version of the Solace. The expert team at Apex Cycle in Newton, Massachusetts facilitated the loan of the tester, and spent a good 45 minutes chatting about the machine: its disc brakes, its dual-zone carbon layup, its comfortable ride and relaxed riding position. I had never ridden a bike with disc brakes, road, mountain or cross, and I was intrigued at the opportunity.

It was a sleek and visually striking steed, in crisp grey and black with sharp dark orange accents, which was a nice departure from my usual preference for the visually austere. The drivetrain was a solid (if uninspiring) Shimano Ultegra. Stopping power—the bike’s key marketing feature so far as I can tell—were provided also by Shimano, in the form of its proprietary hydraulic disc brakes. These were paired with Shimano’s hydraulic dual-control brake levers. I never got used to the noticeable additional travel in these levers before the brakes actually engaged. The folks at Apex mentioned this, but it was more pronounced and disconcerting than I anticipated. The wheels, seatpost, handlebars, and stem all hailed from Scott’s Syncros line, and the bike I received was equipped with 28mm Vittoria tires.

I ride 25mm tires, so was expecting a plusher ride than normal. But here again, even though I was told when picking it up that the bike would be comfortable, nothing could have prepared me for how velvety smooth the ride was going to be. Tires can only get you so far, so I did some reading.

Scott designed the Solace with two different zones of comfort in mind – the “Comfort Zone” and a “Power Zone.”

According to Scott, the Power Zone is extremely stiff and is comprised of the tapered head tube, oversized down tube, bottom bracket shell, and asymmetrical chain stays. By contrast, the Comfort Zone is specifically engineering for each frame component. In other words, the seat stays are engineered to work in concert with the seat tube by, for example, connecting them to the sides of the top tube instead of the seat tube. The upper seat stays (i.e., where a dual pivot brake assembly would have been mounted) provided so much lateral play that, with little effort, I was able to flex them several millimeters toward each other with my hand. Along with the dual-zone design, Scott touts the “endurance geometry” of the Solace. This translates to very relaxed, upright riding position. The top tube has a marked upward slope, the headtube is taller, and the rake angle of the fork is more relaxed.

For me, all of this focus on comfort seemed to prevent the bike from really shining in some key areas of my rides. It seemed a bit sluggish off the line, hesitant during the first several pedal strokes of a sprint, a little loose cornering, and seemed a little removed from the riding surface. As a matter of personal preference, I would certainly sacrifice a bit of the comfort to get a bit more road-feel and agility. But this is trade-off is precisely where I can see and appreciate the goal of the Solace. While some may prefer a tighter, sportier-driving car, others prefer the plush ride of an air suspension equipped Lincoln. The Solace seems very much directed to the charity ride crowd, and makes no bones about its intended purpose. And it achieves its goals in spades.

After spending a solid dozen to fifteen hours in the saddle and working up some good lather on familiar rides of varying difficulty and terrain around Boston, the bike acquitted itself well and was actually quite an enjoyable ride. However, while the marketing folks at Scott may not like to hear it, the touted disc brakes came off as gimmicky. This may be more in the way of puzzlement over the growing adoption of disc brakes on road bikes, but I frankly would have enjoyed testing a Solace equipped with a set of Ultegra dual pivot brakes. The disc brakes gave me no discernible advantage in terms of braking power or efficiency, and seemed to add some unnecessary weight to the build. Overall, even though no one is going to lead the peloton on this bike, the weekend warrior will be hard-pressed to find a $3,500 full carbon road bike this good. As you may have sensed, though, my recommendation would be to seek out the non-disc brake version.