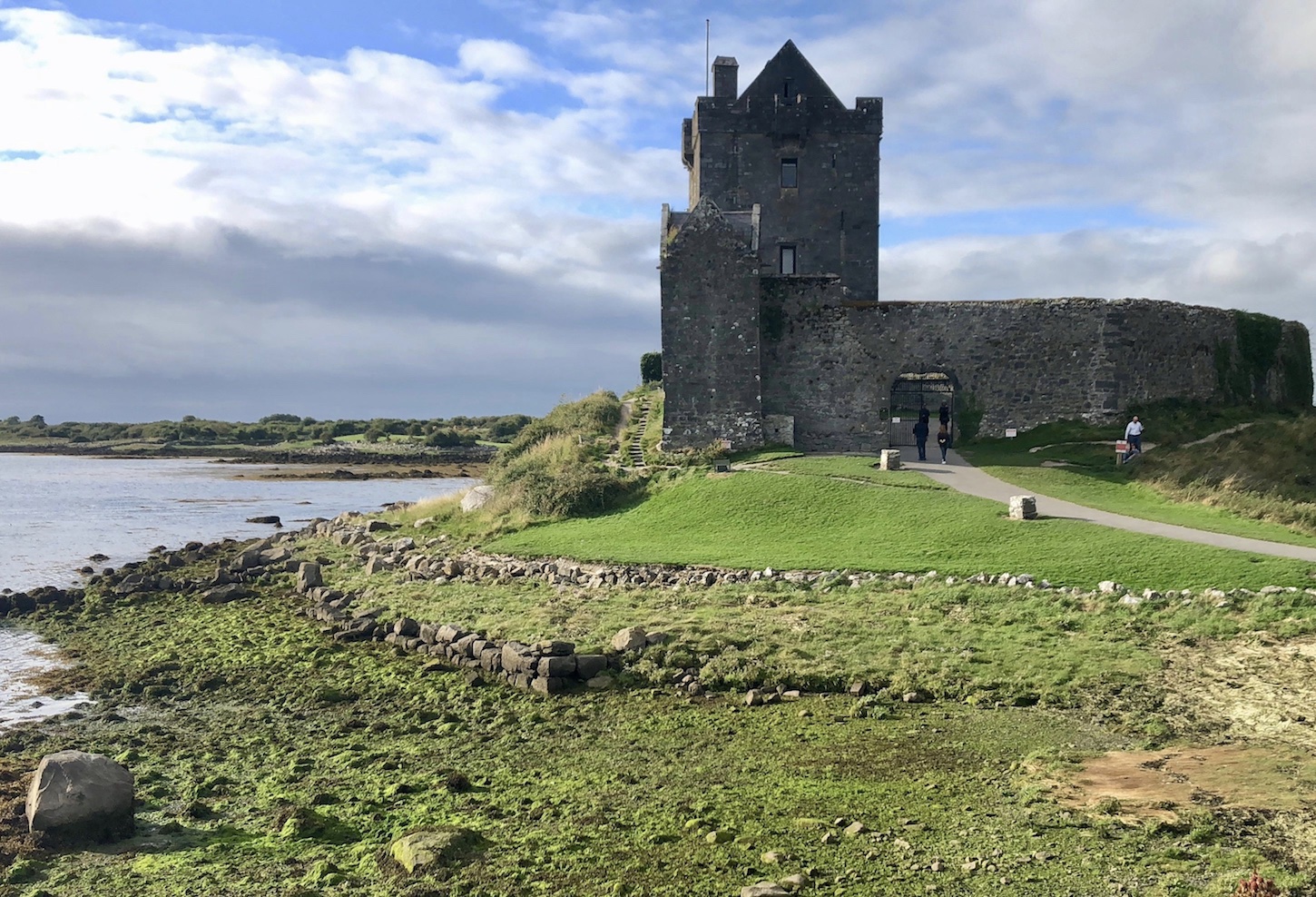 When a spare three days in Europe came across my calendar, I did what any experience-seeking endurance athlete would do: I planned a bike-packing adventure along the west coast of Ireland. It was an adventure that I dubbed ‘The Spirit Quest’.

For as long as I can remember, I’ve felt compelled to get on my bike, point it in a particular direction, and just riding. You see, I grew up around endurance sports. My dad was (and still is) an incredible triathlete, racing on the burgeoning scene in Australia in the early 1990s. Some of my fondest childhood memories involved traveling to races around the country and idolizing my dad and the other athletes out there pushing their limits. As I’ve gotten older, I have realized that feats of endurance for the sake of adventure are where the real magic happens. I get no greater sense of accomplishment than setting a challenge, meeting it with a healthy level of fear, and completing it.

I’m a new dad, and am in the midst of growing my digital content platform (InnerVoice), meaning time has been scarce. So when a spare three days in Europe came across my calendar, I did what any experience-seeking endurance athlete would do: I planned a bike-packing adventure along the west coast of Ireland. It was an adventure that I dubbed ‘The Spirit Quest’.

For context, I was in Ireland to attend my business partner and friend’s wedding in Tubbercurry, a small town in County Sligo. I had spent the previous week in Switzerland completing the TorTour Challenge, a 550km stage race. I was as a guest of IWC Watches in support of the Laureus Foundation, and completed the challenge in a team of 3 cyclists.

I had heard incredible things about Ireland, and I’m a huge advocate for exploring new countries on two-wheels, so the idea for The Spirit Quest was born. During my research I decided to plan my route based on testing my physical limits over the full three days I’d be riding.

The plan was to fly into Cork, meet a friend of mine at the airport, unpack and build my bike and hit the road., while my mate, Nick shuttled my suit and bike bag to my final destination. My flight landed at 1pm and the sunset was 8:45 pm, and I was pre-booked for the first night’s hotel in Tralee, knowing it would be a push to arrive before dark. In hindsight, I was cutting things very close.

The plan for Day 1 was to ride strongly until I came across something of interest, stop to take some pictures, enjoy the scenery and then keep on trucking. I planned my route to visit downtown Cork, and to stop at the famous Blarney Castle on my way out of County Cork.

The first few miles of my journey were a little busy, getting from the airport to downtown. Right from the start the drivers were courteous and friendly and gave me enough space when passing. It did take a moment to get used to riding on the left-hand side of the road; although I grew up in Australia, I have spent the last ten years living in Canada, so it wasn’t something I was 100% confident in until I got rolling.

I managed to find the (parking lot of) Blarney Castle. The actual tourist attraction was well hidden behind the paystation, so no kissing the stone for me!

As I continued my journey two things stood out: How many different shades of green cover the landscape, and how few fellow cyclists there were on the roads. I hardly saw another soul. The cows were my main companions on Day 1.

The colors were truly spectacular, vivid yet moody depending on how long the sun shined on a particular patch of earth. Just as memorable were the smells; some not great (the cows), others fresh and energizing.

Part of this trip for me was to reconnect with myself and with the feeling of riding just for the sake of it. Before the trip, my riding had been rushed, squeezing in an hour or two between meetings, or at the beginning or end of the day. Other than ending up in the right town at the end of each day, I had no agenda, which was just fine with me.

In Ireland the roads are lettered based on a few factors: the width of the road, number of lanes, number of potholes, and likelihood that the road runs out and turns into a gravel path. I chose my bike setup so that I could go wherever I needed to, so I decided on hitting as many R and L roads as I could – for adventure’s sake. When I eventually did run into some other souls, quite often it would be a farmer on a tractor, or someone walking their dog. I felt isolated but not alone on any point of the trip.

With daylight quickly fading, I pushed hard for the final stretch of the day, arriving in Tralee right on sunset, and just in time for the town to come to life in celebration of the annual Rose Festival. My planned stay at Benner’s Gastropub and Hotel came with the promise of an incredible Irish Stew and a pint of Guinness. Neither disappointed.

Now, I didn’t realize just how big of a deal the Rose of Tralee festival was in Ireland, and among Irish communities around the world. To stumble upon it was a treat in itself. I took a stroll through the town of Tralee and checked out some of the festivities before settling in for the night, knowing the next two days would be long and challenging.

The goal of Day 2 was to link up with the Wild Atlantic Way, a famed tourist route which takes in the dramatic western coastline of Ireland. I also wanted to make it to at least Galway, and even further if I could, depending on my energy and the conditions.

For the last couple of hours of Day 1, I felt like my crank was loose, so I needed to make a quick stop at a bike shop before setting off for my Day 2 adventure. It turns out the best shop in town was less than a minute from the hotel, and the service was excellent. In typical Irish fashion the owner, Mr. O’Halloran, knew friends of the family of the wedding I was headed to. He also forewarned me about some of the wind I could expect later in the day as I got closer to Galway.

Remember the different shades of green? Well, on Day 2 I believe I counted another 947 unique hues. The Emerald Isle is an appropriate description. The beginning of the day was even more magical, given the bright and warming sun. I linked up with the Wild Atlantic Way and ran into a fellow traveller who had a little more baggage than I.

The diverse landscape was a highlight of my day. Rolling hills, farmland as far as you could see, and of course the famed Cliffs of Moher. My route also included a ferry crossing from Tarbert to Killimer, a beautiful treat to accompany my midday break.

The afternoon’s route took in quintessential western Ireland; windswept farms, abandoned buildings, lots of local roads and some sweet ancient gravel. The Cliffs of Moher were genuinely spectacular and gave me a sense of just how rugged the coastline is.

It’s fair to say Mr O’Halloran’s wind warning from earlier in the day was in the back of my mind, but it wasn’t until I rolled out of the Cliffs that I knew what he meant. These were relentless, grinding headwinds that seemed to be getting more fierce as the day wore on. There was nothing more to do than to grit my teeth and keep moving forward. Moving a little slower than planned offered the opportunity to take in the sights. Kinvara and Dunguaire Castle were real highlights and gave me a chance to stop and admire the beauty of the historical landmarks that are scattered throughout the country.

The day also featured the marked Strava segment known as ‘The Burren Wall’. It’s 13% for around 600m, which was a little kick in the shins from otherwise steady, rolling climbs that are the norm throughout the countryside. That said, the view from the top and corresponding descent more than made up for the effort.

The last 45 minutes felt like I was riding backwards, the wind was becoming quite annoying. I decided to make my way to Salthill and rolled in just before sunset. First stop: Shower. Second stop: Guinness.

The morning of Day 3 started a little moody and overcast, and my energy was low. I was missing my wife and daughter, and it took me a moment to realise how lucky I was to be here in this spectacular country, fulfilling a lifelong dream of completing this type of adventure.

For the first 30km, I headed west alongside the coast. It reminded me a lot of the coastline of Victoria, Australia, with brightly coloured lifeguard shacks dotted along the numerous swimming beaches. It took an hour or so for my energy to amp up (or the coffee to kick in). I could feel the breeze on my right shoulder getting progressively stronger, which meant the right turn to head north was going to make for another day with my nose in the breeze.

One thing that struck me throughout my trip was just how varied the landscape was, and never more so than today. After making the right turn away from the ocean and into the wind, I was greeted with Loch after Loch, incredible bodies of water that went on for as far as the eye could see. Ancient rocky escarpments sprung up from the land, sheltering tiny villages, farms that I imagine were the lifeblood of the country in another time. There was also no escaping the wind!

It was slow going, and I was only able to cover the first 60k in around 3 hours. To make matters worse, I was starting to experience a hunger flat. Then, just like that, a tiny sign pointing toward what could have been an abandoned building. It was like a mirage and felt like the perfect place to stop and refuel. The owner was an absolute legend, he threw on a pot of coffee, pointed me to the biscuits and Mars bars, introduced me to the friendliest and fluffiest dog in the world, and regaled stories of more prosperous times. I believe we had a significant impact on each other that day and I left energized and ready to take on the rest of my journey.

I spent the next few hours in awe of my surrounds; narrow country roads led to Irish traffic jams (sheep wandering across the road without care). Some gradual 3-4% climbs were the perfect grade and length to find a nice rhythm. I felt a reconnection to my breath and my effort for the first time on the trip, and the kilometres were starting to tick by with ease. Day 3 was a day to remember, made all the more exciting that I was heading to meet my mates and start the wedding celebrations.

The final climb from Bunnyconnellan to Knockasliggaun and corresponding descent past Lough Talt and into Tubbercurry was perhaps as good as it got. The final hour of my trip felt like a microcosm of Irish landscape and the three days of The Spirit Quest.

Upon arrival at Cawley’s Hotel, a Guinness was waiting, and the tale of ‘the guy who rode to the wedding was growing with each introduction. In the spirit of Irish weddings, the rest is a blur, however this much is true: a vow to find time to explore a new place, each year, was made.