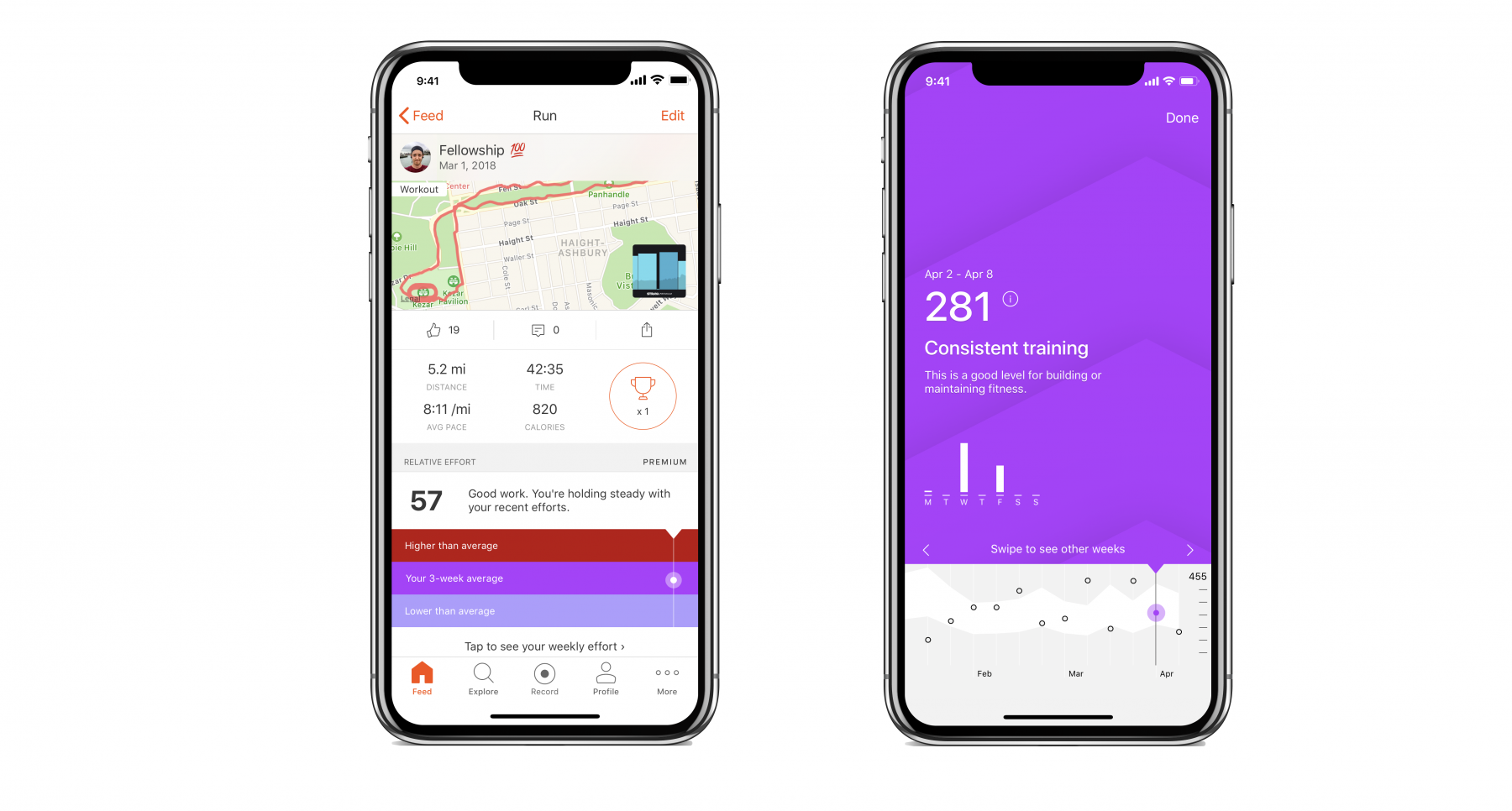 The folks at Strava have revamped their “Suffer Score” with a new feature called “Relative Effort”.

Up until now, one of Strava’s most popular Premium features has been “Suffer Score”, which gave users the ability to quantify their effort during an activity using heart rate data. Although “Suffer Score” has become a popular feature for providing insights into an activity, it had limitations in providing accurate results across sports and athletes for similar efforts. The main problems were:

Working with Dr. Marco Altini, Strava developed a model to generate a new version of “Suffer Score” called “Relative Effort”, which provides new Premium features that enables insight into the user’s week-over-week training regimen. The new model follows the same approach of using time spent in different heart rate zones to score an activity, but differs in a few key ways: it weights intensity of effort more than duration, is better at weighting equivalent efforts across sports, and scores equivalent efforts by different athletes similarly. The result is that Strava athletes are better able to use this metric to compare activity effort across workout types, sport types and even individuals.

To calculate “Relative Effort”, the model takes in a stream of data with an athlete’s heart rate and the corresponding timestamp as inputs. Using the athlete’s max heart rate (either entered by the athlete or estimated), this heart rate data is divided into a number of zones that approximate different levels of cardiovascular intensity. For each heart rate zone, the model applies a coefficient to weight the time spent in that zone. The higher the heart rate zone, the harder the effort, and a higher coefficient to more heavily weight time spent in that zone.

To achieve our goal of providing similar values for athletes producing similar efforts, Strava leveraged its rich data set to find a group of activities from athletes giving a roughly equivalent effort. Furthermore, to tune on a subset of activities from thousands of different athletes, Strava made the assumption that Athlete A giving an all-out effort should expend an equal amount of stress/effort as Athlete B, even if the athletes have different absolute fitness levels. These two athletes should then have similar Relative Effort values. After testing 5k, 10k, and half marathon distances, Strava settled on using 10k running race efforts to tune the coefficients applied to each zone. Running removes much of the variability associated with sports like cycling, where drafting and coasting can result in significant changes in effort and heart rate. The 10k distance is short enough that an athlete is consistently in a high heart rate zone, yet long enough for heart rate data to settle into a consistent pattern and avoid the noise often found in shorter events.

With a large subset of 10k running races on Strava, developers iterated through thousands of different coefficient combinations for each heart rate zone, with the goal of minimizing variance of “Relative Effort” values from their data set. By minimizing the variance on a set of equivalent efforts, Strava sought to increase the precision of the model and rate equivalent efforts equally. In addition, Strava used the coefficient of variation (standard deviation / mean) to measure variance in order to control for the effect of increasing values when testing higher coefficients. Strava was also able to decrease the coefficient of variation from 0.44 from the original coefficients to 0.39, a 12% improvement. This decrease in variance will improve the accuracy of the “Relative Effort” model and give our athletes a better representation of their efforts.

Extending the model to different sports

The second objective of rebuilding “Relative Effort” was to better approximate efforts across activities. To do this, Strava used activities from Olympic distance triathlons as a way to find equivalent efforts to tune the model across sports. Although not perfect in terms of athletes giving equal effort in each leg, Strava believes that in aggregate those activities should give them a reasonably hard effort for comparison. This was particularly valuable to validate using a lower set of heart rate zones for cycling activities, and a lower max heart rate for swim activities.

To make “Relative Effort” scores comparable between running and cycling, Strava compared both activities with data from the Olympic distance triathlon dataset to view an approximation of the values using the new ride zones. The ride zones are relatively lower than run, as cycling heart rates are lower than weight-bearing activities like running. Strava found a median score of 211 for run, and 190 for ride. Even though the ride median is slightly lower than the run median, Strava is comfortable with this because a cycling effort during a triathlon is usually submax to save some energy for the run.

Additionally, Strava wanted to make sure they had a good approximation between ride and run before we moved on to swimming. Heart rate based training isn’t as common for swimming, and literature for swim heart rate zones isn’t as well defined as run and ride. Moreover, swimming max heart rate has been described as 10–12 beats per minute lower than other activities. Given the non-weight-bearing nature of swimming, Strava used cycling zones and tested a mix of lower max heart rates and a lower lactate threshold heart rate. Strava settled on using cycling heart rate zones with a max heart rate 12 beats lower than the recorded value, based on comparing the “Relative Effort” distributions from swim, ride, and run legs of the triathlon data set.

For Strava’s 20 other supported activity types, there isn’t extensive research on relative heart rate differences between activities, so they assigned the activities either run or ride HR zones. This is roughly based on whether the sport is weight-bearing and bipedal (Nordic ski, hike) in which case Strava assigned the run zones, or is not weight-bearing (Windsurf, handcycle, kayak) and has lower expected heart rates, and applied the cycling zones.

Leveraging their extensive activity dataset, Strava was able to tune and extend “Relative Effort” to better quantify users’ efforts, in turn powering a compelling new product for them to help guide their training.