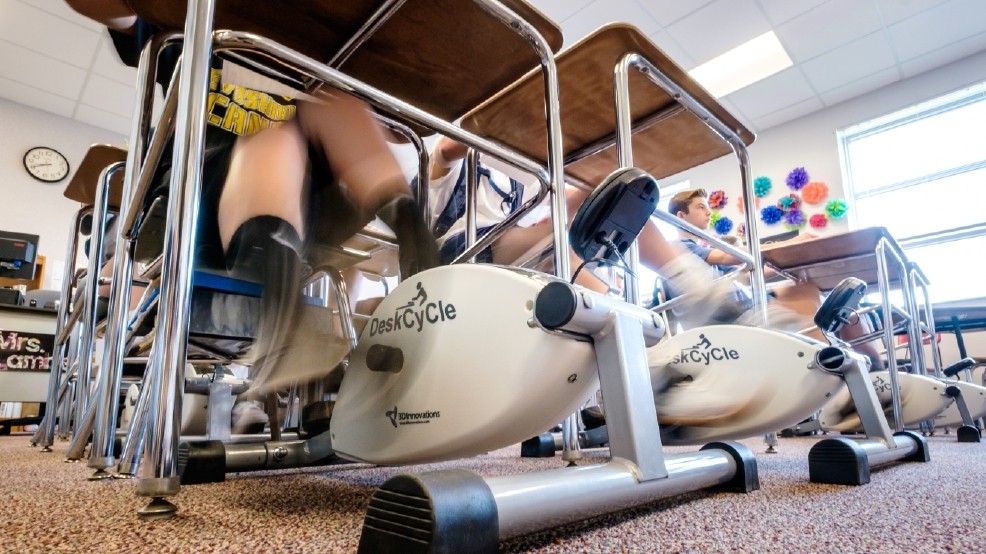 An innovative school teacher has come up with a novel way of stopping her students from fidgeting – by installing bike pedals under their desks.

Bethany Lambeth, who teaches maths at Martin Middle School in Raleigh, North Carolina, noticed several of her students had trouble focusing during her lessons.

So as a way of helping them channel their energy, she put the bike pedals in place so they wouldn’t lose concentration.

Lambeth, who has been a teacher for seven years, said: ‘There’s an initiative in our county where you can apply for a “Four C” grant – for collaboration, community, creative and critical thinking.

‘I’d read an article a while ago about an elementary school that had used these desks, so I applied for a grant to see if I could get them too. ‘As soon as we got them the kids loved them straight away.”

‘A lot of students have trouble focusing in class – it might be the end of the day and they’re tired, or they’re lethargic from not enough physical activity, and some have ADD/ADHD and find it hard to concentrate.

‘Before they would drum on desks, touch other students, just generally fidget – but they don’t do that anymore.

‘The cycle desks helps get the energy out of their systems and stops the fidgeting, and it helps them to concentrate.’

And she claims that since the desks were installed in April this year, the quality of her students’ work has gone up and grades have rocketed.

She added: ‘I’ve definitely noticed grades going up. The students are producing more, and better quality, work – and getting it in on time too.”

‘The parents love them too – they’ve noticed their kids are excited and enjoy going to math class.”

‘A lot of kids take my class because they’re struggling, so this gives them something to look forward to.”

‘A lot of other teachers think it’s an interesting idea and want to know more.”

“People are generally quite intrigued at first, but I’ve had a lot of positive responses.”

‘At first people want to know if students find it distracting as they’re not used to it – but actually it has the opposite effect.”

‘The kids are no longer picking each other, fidgeting, walking around and exploring – they get their energy out on the bike and get their work done.

‘The world is changing, and kids need this extra stimulation. I’ll definitely be keeping them in my classroom for good!’

And her students, who range in age from 11 to 14, say they too love the cycling desks.

Sofia Fedele said the cycling helps her focus on her work during class, while Quinn Spear said the extra exercise had helped him pedal 5.5 miles and burn 133 calories all before 10am.