The “VisionVenture” Concept Camper from Hymer and BASF 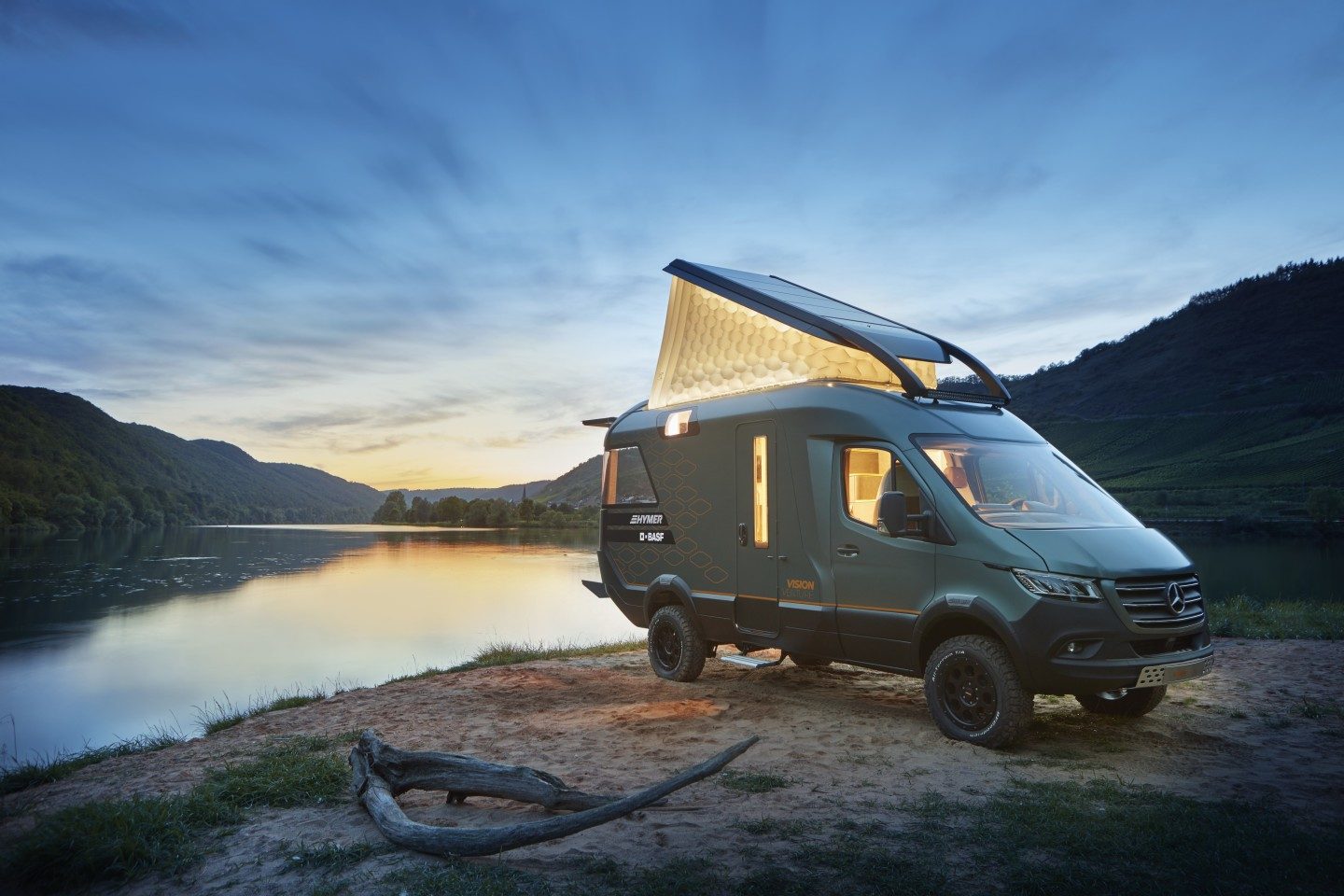 One of the more interesting camper designs to emerge lately, is the concept mobile camper from Hymer and BASF called the VisionVenture.

“Using the development expertise of the BASF Creation Center, a new class of van has been created that blazes a trail in lightweight construction, independence, travel experience and design” says BASF, who unveiled the vehicle at the Caravan Salon in Düsseldorf, Germany, in  August.

“HYMER is synonymous with premium quality, innovation and a sense of discovery. The VisionVenture developed in tandem with BASF perfectly captures these values. It already promises to give our customers an entirely new sense of freedom,” said Christian Bauer, Managing Director of HYMER GmbH & Co.KG.

Rather than have two beds take up prime living space, Hymer decided the VisionVenture would rely upon a pop-up roof to house its only bed, creating a two-story layout optimized for couples. Moreover, the upper tier is protected by inflatable baffles for added insulation and strength, allowing the roof to be used as a small balcony, leaving the main level to serve as a spacious, thoughtfully arranged living area.

Additionally, the interior of the VisionVenture also features organic materials like felt, wood, bamboo and leather.

The camper is further punctuated by BASF’s Veneo Slate, a pliable surfacing material with razor-thin natural-stone facing, for an enhanced look and feel.

The bathroom comprises has a pullout, rotating vanity sink that doubles as a rain shower.

Behind the upholstered outer wall of the bathroom cell, the rear lounge houses a sofa, along with a folding dining table that drops down and stows below the passenger-side bench, while a large rear window and wraparound side windows provide a panoramic view.

The rear window can also be propped up, providing al fresco-style dining, while the lower gate acts like a small terrace.

The kitchen block includes a flush cooktop, sink basin, a wall-mounted faucet that emerges from a handsome tile surface and a small refrigerator drawer with ample under-counter storage. The kitchen also combines a staircase with hidden storage that draws its inspiration from “Tiny Home” living.

If that’s not enough, the VisionVenture also includes a dedicated workstation, complete with a laptop desk that folds down in front of the swivel passenger seat, along with a pin board, LED lamp and electrical outlets.

Hymer rounds-out the exterior with BASF’s award-winning Climacool automotive paint, which claims to lower exterior surface temperature by up to 20 degrees and interior temperatures by up to 4 degrees. The outside aesthetics are further highlighted by bead lock-style wheels and an LED light bar, along with a roof-mounted solar array for off-grid power.

Lastly, mobility for the VisionVenture comes courtesy of a Mercedes Benz Sprinter platform, complete with the efficiency of diesel power and all-wheel drive capabilities.