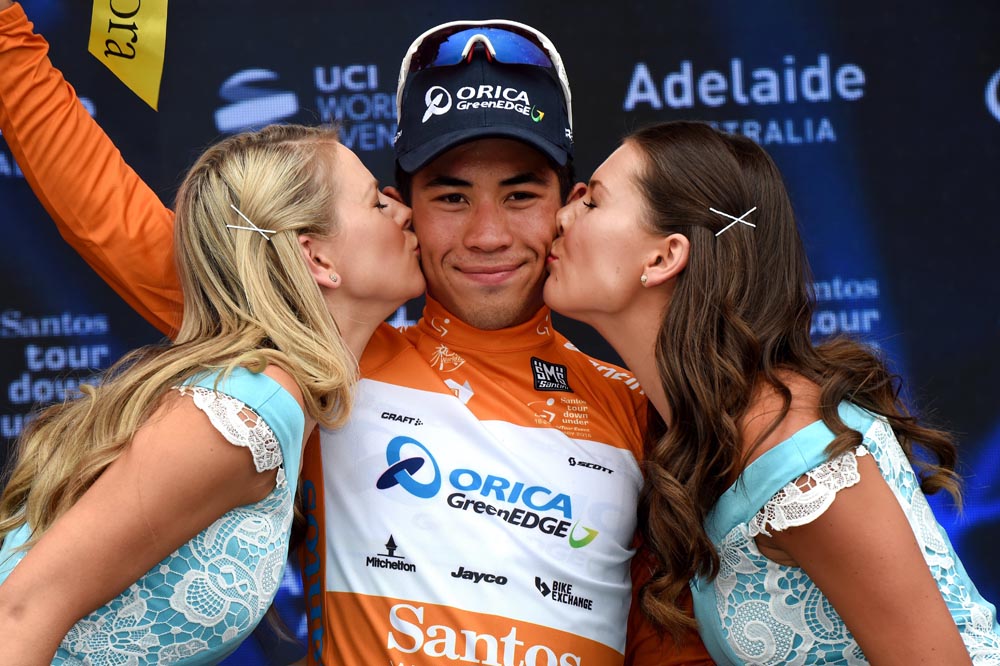 Young Australian speedster Caleb Ewan unleashed his customary burst of speed today to win Hostworks Stage 1 of the 2016 Santos Tour Down Under into the town of Lyndoch today.

“I felt good all day and they (Orica-GreenEdge team) backed me right from the start,” said Ewan as he headed to the podium to claim the Santos Ochre Leader’s Jersey. “To win a road race you have to be very conservative during the day, the victory usually goes to the one who’s got the freshest legs and the best team in the end.

“I need to thank Simon Gerrans for sharing the team with me (because) if he’d asked for the whole team to ride for him we’d do so,” said Ewan of his team leader who has three times won overall honours in the Santos Tour Down Under. “For a guy like that to tell me you can have your go I’m really grateful.

“It’ll be a really proud moment for me to race in the ochre jersey tomorrow,” he said. “I’ve never led a World Tour race before and to do it in my own country means a lot to me.”

For his part, Renshaw was pleased to get a placing.

“I haven’t raced as much as the other Aussie guys, and Caleb is hard to beat when he’s going like he is right now,” said Renshaw. “The team did a great job today for me, but my goals come later in the season with Mark Cavendish (for whom he will be a key lead out rider).

“We will keep working for a stage win this week but it was a great start for the team, because this is the first time I’ve really raced with these guys since coming to the team.”

Cannondale’s Wippert was also happy to be in the mix at the finish conceding that Ewan’s top speed is hard to counter.

“The guys did an awesome job to keep me perfectly in front,” said Wippert. “The last five kilometres, it was almost a crash, and sometimes you would lose ten places in 100 metres, and you had to fight back.

“With one kilometer to go, I was pretty far back, and I made the call to go,” he explained.

“Ewan is too good these days to go that far out. Timing is everything with wind like this and I am happy we didn’t crash,” said Wippert who was nonetheless happy to finish in the placings on his first day racing with his new team.

Ewan picked up a time bonus for his win today to give him a four second lead over Renshaw and Gougeard on the overall rankings.

Overcast skies provided some welcome relief from the predicted scorching temperatures as did the occasional smattering of rain drops but it was still a hot, dusty, gusty day in the saddle for the 140 strong peloton who set off from the Adelaide suburb of Prospect to ride the 131 kilometer stage, including four laps through the Barossa towns of Lyndoch, Cockatoo Valley and Williamstown.

Seventy seven thousand came out to support the race and Australian Sean Lake (UniSA-Australia), Frenchman Alexis Gougeard (AG21R-La Mondial) and Dutchman Martijn Keizer (Lotto Jumbo – NL) gave them something to cheer as the trio escaped off the front early in the stage riding clear of the peloton.

As the trio crested the category two climb at Tea Tree Gully 12.8km into the stage it was former rower, Lake, who grabbed the Subaru King of the Mountain points ahead of Keizer with Gougeard third. Forty seconds later Michael Hepburn (Orica-GreenEdge) led the main bunch over for fourth place climber’s points.

“A long ride up the road suits me more than the other guys so it was my job to break away for UniSA,” said Lake who two years ago swapped a career as a lightweight rower to pursue cycling.

He placed third in the time trial at the recent Australian Championships in Ballarat which was enough to earn him selection in the UniSA – Australia team for the opening UCI WorldTour race of the season.

Lake’s effort to be first over the climb gives him the lead in the Subaru King of the Mountain competition.

“I’m absolutely stoked to get the King of of the Mountains jersey,” said Lake. “I gave it all in the climb.”

The breakaway trio also shared the spoils of the two intermediate iiNet Sprints of the day in Cockatoo Valley. The first, at the 60 kilometre mark, went to 22 year old Gougeard ahead of Keizer and Lake. Gougeard took the points again at the 86 kilometre second iiNet sprint, this time ahead of Lake with Keizer third.

The gap to the lead three stretched out to more than two minutes at one stage before the work began in the bunch to reel them in. But Lake wasn’t done yet with the debutant trying his luck again.

“I saw the two Europeans were sort of struggling with the heat so I went for a solo time trial,” said Lake who stayed clear on his own until five kilometers from home. “It’s always possible to get a stage win like this but not today.”

Back in the bunch Hepburn rode off the front giving Orica-GreenEdge a tactical advantage and forcing the teams of the other sprinters to commit to the chase.

Gougeard was named the Alpecin Most Competitive Rider of the Day for his role in the breakaway.

“I was briefed for breaking away in case there would be more riders up the road,” said the Frenchman. “It was a good test. I don’t have great feelings yet but I had good legs today, certainly better than one year ago in this same race.

“Physically I feel good, mentally too and we’ll try to do a good job for (teammate Domenico) Pozzovivo on GC (overall).”

Tomorrow’s Staging Connections Stage 2 sets off from cosmopolitan Unley for a 132 kilometer stage through the picturesque Adelaide Hills which includes five passes through the eventual finish line in Stirling.

Overall classification after stage one