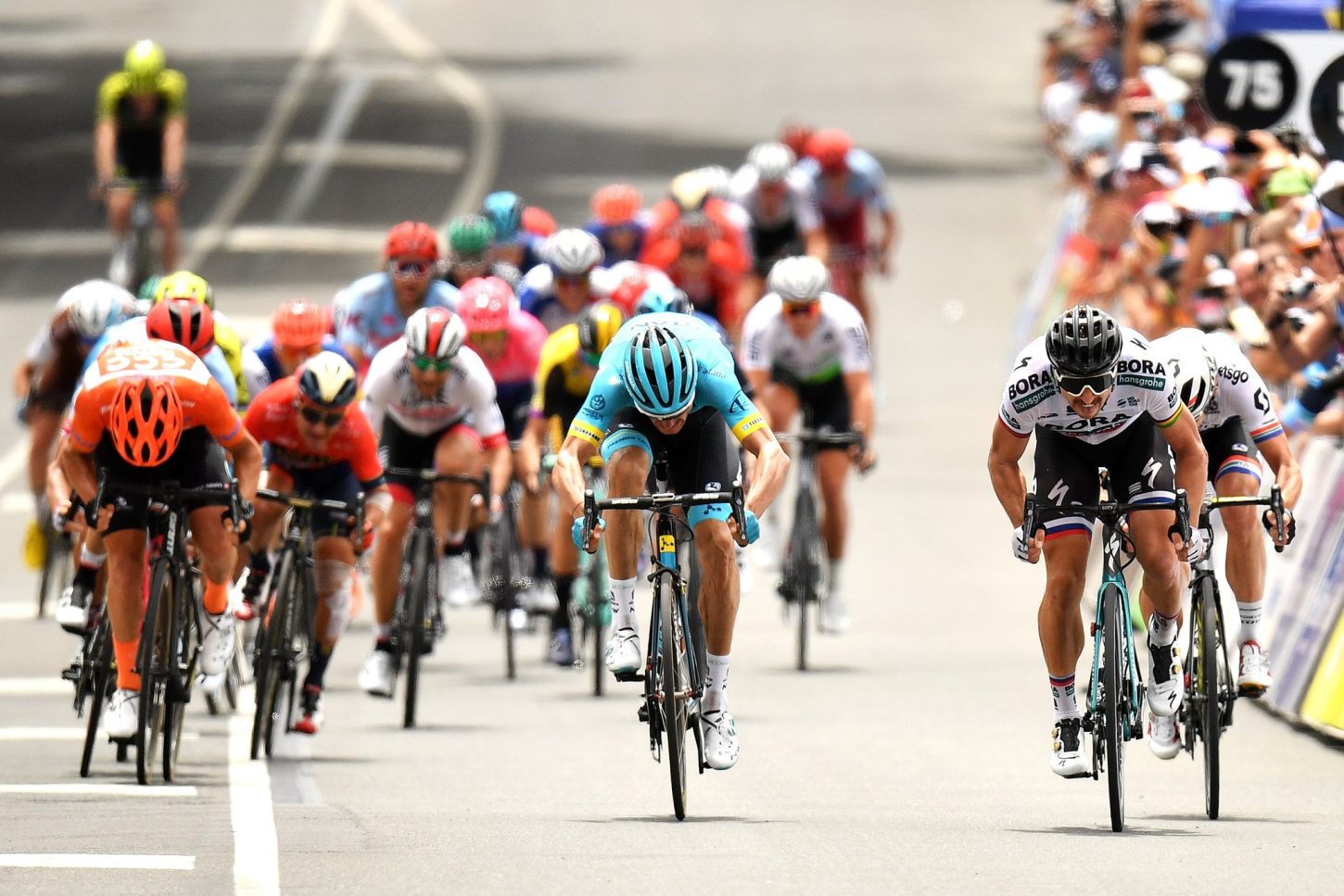 PETER SAGAN (BORA-hansgrohe) won stage 3 of the Santos Tour Down Under to leap into the Ziptrak Sprint Jersey and within one second of Santos General Classification winner Patrick Bevin (CCC Team).

In a lightning sprint to the line, it was the Slovak national champion who beat Luis Leon Sanchez (Astana) in the final dash to claim the stage win.

It’s the second consecutive year that Sagan has won in Uraidla, and he benefitted from a controlled race where GC leader Bevin’s CCC Team ensured the peloton had enough in the tank to reach the finish.

“Thanks to all the CCC riders who controlled the race,” Sagan said post-race.

“Bora-Hansgrohe took care of me and kept me at the front. At the end, it was a very great finish.”

“As we passed the last climb, I thought it was going to be the same as last year. It was almost a copy-paper result from last year. It’s much better to have some experience in finales like this. But in the end, [Luis Leon] Sanchez was also very close to winning.”

Sanchez – a former winner of the Santos Tour Down Under – now sits third behind Bevin and Sagan, and is a strong chance to leap further up the order with a strong performance on the final three stages.

A final dash for victory

With that break neutered, Devenyns mounted his own attempt at the 1.3km mark, but that only served to drag the contenders with him, leaving a mad scramble for the line.

A tough day out for the breakaway

On a stage with 3300m of vertical gain, a breakaway would always find the going difficult.

Boaro had earlier won maximum points at the Subaru King of the Mountains checkpoint at Lenswood to leap into second place in that classification, and perhaps unsurprisingly couldn’t hold with the break for long.

But his teammate too was unable to keep the pace when the EF Education First combo of Whelan and Bettiol lifted the pace to shatter the break.

They pushed ahead but Whelan’s legs gave at the foot of the penultimate visit to the steep Spring Gully Road, while Bettiol fared little better when the peloton engulfed him at the beginning of the final circuit.

It was left to the peloton to decide the winner, with Mitchelton-SCOTT leading the pack into the final

The stage’s final circuit was touted as the track to break open the race, but in reality it provided a similar finish to others – with a bunch sprint instead featuring rouleurs and climbers, rather than straight-sprinters at the end of a difficult day of climbing.

Comprising four unique road sections – a fast, technical descent, followed by a short, steep 12% climb and then a rolling ascent to Summertown before a steady climb out through Uraidla, it would punish the riders in a multitude of ways.

But the tactical control of the peloton once again proved too good for the breakaway, with the mass of riders able to conserve long enough to lift the pace at the end and demolish those brave enough to venture on in small numbers.

While Elia Viviani claimed both Ziptrak Sprint intermediates, Peter Sagan’s win on the line catapulted him into the blue jersey for Friday.

Michael Storer reclaimed the southaustralia.com Young Rider’s jersey with another solid showing to stand fourth in the GC as well as top of the youth classification.

Jason Lea (UniSA-Australia) retained the Subaru King of the Mountains jersey, but remains vulnerable with Boaro now just behind on the rankings.

Patrick Bevin will continue wearing ochre on Friday, with a course suited to his style culminating with a big climb up Corkscrew Road at the end of Stage 4.