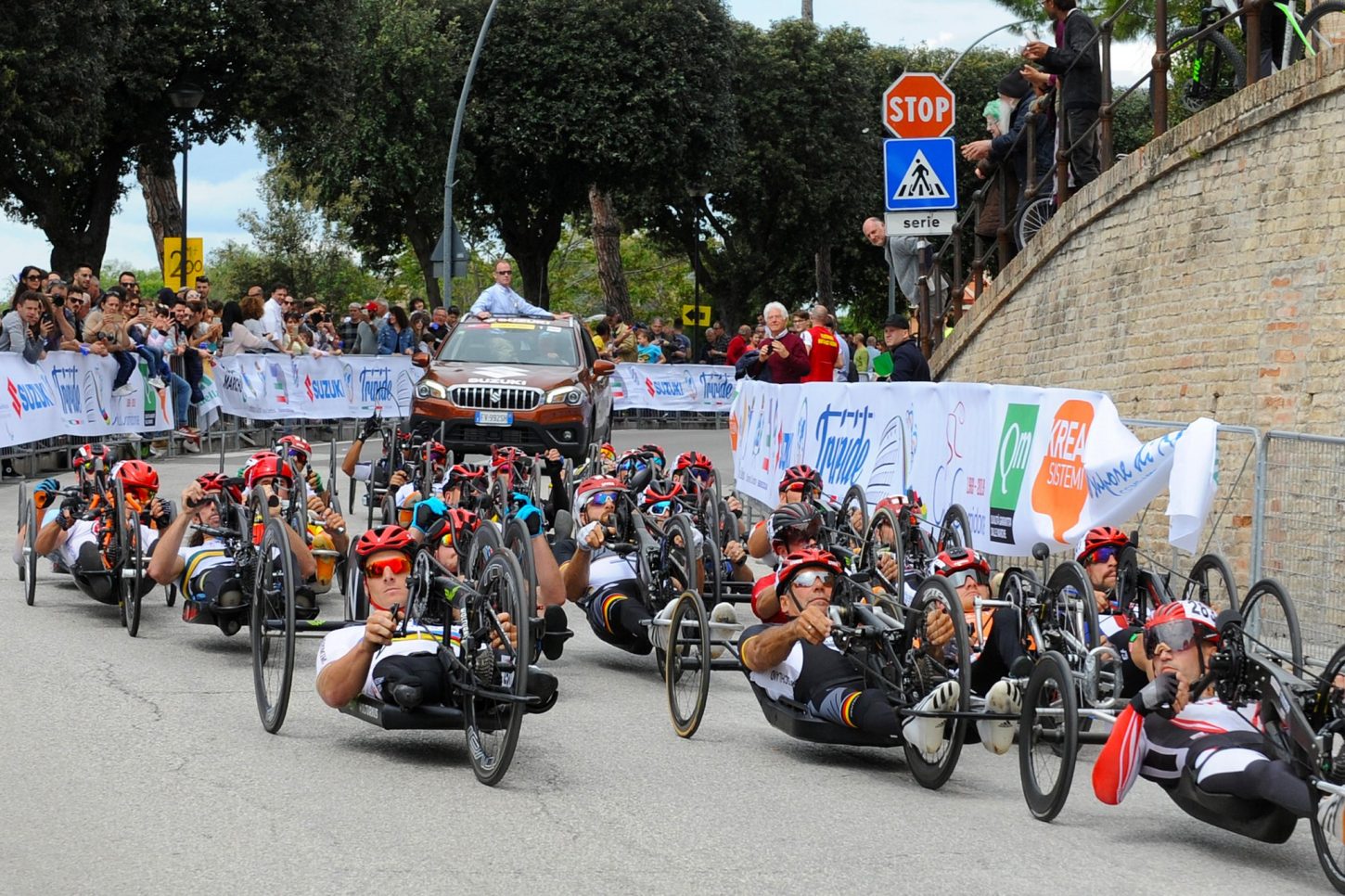 The four-day UCI Para-cycling Road World Cup in Corridonia, Italy, reached its conclusion on Sunday 12 May with the Netherlands heading the rankings thanks to an impressive 15 medals: 10 gold, four silver and one bronze. Hosts Italy claimed second and the USA third, each winning seven gold medals and eight silvers, but Italy edged it thanks to nine bronze compared to the USA’s four.

Leading the charge for the Netherlands was Jetze Plat who won gold medals in both the H4 individual time trial and road race. The 27-year-old averaged an impressive 32.442km/hr on his handbike to finish the 27.1km time trial in 50:07mins. It was an immense effort from Plat, who beat second-placed Thomas Fruhwirth of Austria by 1:10mins. Poland’s Rafal Wilk completed the podium. Plat’s performance confirmed the form he showed when he broke the UCI Hour Record in March, increasing the distance ridden to 44.749km – a massive 2.584km further than countryman Geert Schipper’s 2018 effort.

Chapeau also to the Netherlands’ Jennette Jansen, who claimed the double in the WH4 class. The 51-year-old, who first won a Paralympic medal (bronze) back in the Barcelona 1993 Paralympics on the athletics track (5000m), rode to an overall winning time of 43:55mins with the Russian Svetlana Moshkovich and Kara Douville of Canada in second and third, respectively.

Two days later, Jansen rode to victory in the four-lap 36.4km road race, beating second-placed Silke Pan (SUI) by over 12mins (in 1:29:21), with Moshkovich taking third. And congratulations, too, to Carmen Koedood, who became the third Dutch rider to take two gold medals in the WH2 category.

The Italian crowds were out in force all weekend and had much to celebrate with the hosts delivering a string of impressive performances including time trial golds for favorites Giorgio Farroni (MT1) and Alessandro Zanardi (MH5). Farroni triumphed in a time of 22.17mins with Spain’s Gonzalo Garcia Abella in second (22.35mins) and Russia’s Sergei Semochkin third (23.11mins). As for the charismatic Zanardi, he clocked a winning time of 51.52mins. The Netherlands’ Mitch Valize finished just six seconds adrift, while France’s Loic Vergnaud came third in 52.17mins. It proved a fantastic battle between Zanardi and Valize with home support giving the 52-year-old a winning boost.

Zanardi, the former Formula One driver who lost both legs in a 2001 crash, is a master of the time trial, winning Paralympic gold at both the London and Rio Games. On this form, don’t bet against Zanardi making it three out of three at next year’s Tokyo Paralympic Games. Special ‘home’ mention must also go to Ana Maria Vitelaru who won double gold in the WH5.

It wasn’t just European para-cyclists who were gaining the plaudits, however. The USA delivered a strong showing with the women’s team leading the way thanks to double golds from Alicia Dana and Shawn Morelli.

Dana turned 50 in February but shows no sign of slowing down, taking road and time trial gold in the WH3 class. Dana, who has eight UCI World Championship medals to her name, has never looked back since taking up handbiking in her late 20s. Until 16 years old, she was competing as a junior at national level in both cycling and cross-skiing as an able-bodied athlete, but a year later had to realign her goals after falling from a tree, an accident which left her paralyzed from the waist down. She’ll look to add to her Rio time trial silver medal next year. Meanwhile 43-year-old army veteran Morelli stormed to double gold in the WH4 class.

Other notable performances came in the women’s tandem with Poland’s Iwona Podkoscielna and Aleksandra Teclaw riding to gold in both the time trial and road races. Incredibly, the podium for both races mirrored each other, with fellow Poles Justyna Kirlya and Barbara Borowiecka, and Brazil’s Marcia Ribeiro Goncalves Fanhani and Cristiane Pereira da Silva, second and third, respectively.

Just one week after the opening round of the 2019 UCI Para-cycling World Cup in Italy, round two begins in Ostend, Belgium, on Thursday 16 May and runs until Sunday 19 May. This will be the third time in a row Ostend hosts the World Cup.