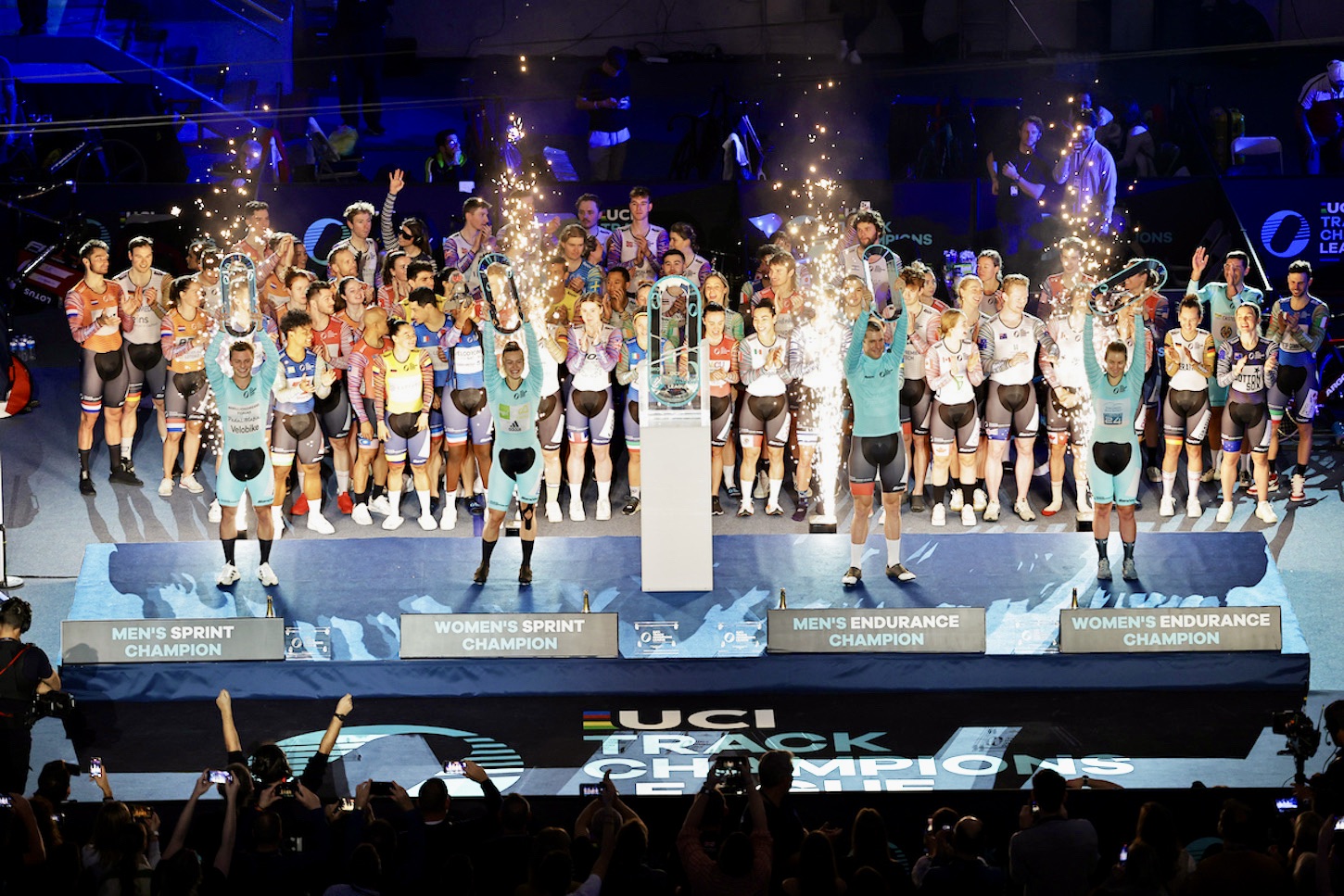 In front of a sell-out crowd of over 5,500 fans inside the iconic Olympic venue, Lee Valley VeloPark, all the riders put on yet another incredible show.

Much of the talk heading into the night had centred on who would come out on top of the Men’s Sprint competition, with Richardson and Harrie Lavreysen (Netherlands) having dominated from beginning to end. Lavreysen took the early bragging rights by winning the Sprint, but it was Richardson who claimed overall honours by outpacing his arch rival in the Keirin final, topping the final standings with a two-point winning margin.

The Men’s Endurance competition couldn’t have been any tighter going into Round 5 with Imhof and Sebastián Mora (Spain) sitting level on points, and that was how things ended, with Imhof awarded the overall victory on account of him finishing two places ahead of Mora in the night’s thrilling Elimination race.

In the Women’s Endurance competition, Valente ensured she held onto the blue jersey from beginning to end by finishing three points ahead of Katie Archibald (Great Britain) after taking fourth place in the Scratch and then claiming second in the Elimination.

Finally, in the Women’s Sprint league, Gros secured a 13-point victory over Kelsey Mitchell (Canada) by winning the Sprint in scintillating fashion after she’d also taken sixth place in the Keirin.

Elsewhere on the night, British trio Mark Stewart, Archibald and Oliver Wood gave the home crowd plenty to cheer. Stewart had them on their feet when he sealed his second Scratch win of the season moments before Archibald bagged her fifth victory of the 2022 series in the Women’s Elimination. Wood then rounded off a hat-trick of British successes by triumphing in the Men’s Elimination.

The opening win of the night had gone to Chloe Moran (Australia), who claimed her first UCI Track Champions League success in the Scratch, while Martha Bayona (Colombia) took her second Keirin triumph of the campaign.

The night belonged to Richardson, Imhof, Valente and Gros though, who each walked away with a coveted blue jersey, UCI Track Champions League trophy, and equal prize money totalling €25,000 per rider.

REACTION FROM THE NEWLY CROWNED CHAMPIONS

Men’s Sprint champion Matthew Richardson said: “It feels surreal to have won the 2022 UCI Track Champions League. I knew it was going to be close between Harrie [Lavreysen] and I coming into the end, but it couldn’t have come any closer than that.

“The whole series has been an intense four weekends, so it’s a relief that I can put my feet up now. This win is super important and it means a lot to me. The London crowd was amazing too, I really hope they enjoyed the racing.”

Men’s Endurance champion Claudio Imhof said: “It’s just crazy. I never believed I could win this when I travelled to Mallorca for Round 1. I knew I’d prepared well, and I knew I wanted to come back racing every week after my accident earlier this year. I gained power and experience with every passing round and I kept things consistent. These last two days in London have been hard but somehow I managed to concentrate on the Elimination tonight and I gave it all I had. It was an incredible moment when I realised I’d won.

“This victory is the biggest thing for me. The crowd and the atmosphere was electric. I really enjoyed winning here in London.”

Women’s Endurance champion Jennifer Valente said: “This definitely caps off a much better year than I ever could have hoped for, and thankfully, my first UCI Track Champions League series has played out pretty much how I hoped for as well. I’ve been living the hotel life for a few weeks now as I live outside of Europe, but it’s a good environment to be in, with good racing, and I’ve really enjoyed it.”

MORE REACTION FROM THE SEASON FINALE

Head of Discovery Sports Events, Francois Ribeiro said: “Coming into this final round, all four jerseys were still to play for and that guaranteed a spectacular night of racing which more-than lived up to the hype.

“Matthew, Claudio, Jennifer and Mathilde all deserve massive praise for their performances tonight, and over the course of the season.

“The 2022 UCI Track Champions League has been an unbridled success and we’ve continued to raise the bar in making the series as fun, dramatic and immersive as possible – not just for the thousands of fans who’ve come to watch the action in person – but for the millions of viewers who’ve also been following the racing right around the world.

“On the track, it’s been an incredible production, but off it was as well as we’ve continued working on improvements with technology and innovation at the core of our thinking.

“The hard work will continue in the months to come to prepare our third season, but right now, I’d like to thank the UCI for trusting us to put on an incredible show, the local venues for their warm welcomes, all the riders that have made it such an exciting series, all the supporters who’ve cheered them along the way, and everyone else who’s helped make the 2022 campaign the best one yet.”

Gilles Peruzzi, Head of Track Cycling at the UCI, said: “The 2022 UCI Track Champions League has been a fascinating series with so many intriguing battles in each of the four competitions. There have been many uncertainties and changes in leaders every week up until the final.

“As well as the thrilling racing, I’ve been especially happy to see the true engagement and competitiveness of the riders along with people of all ages cheering them on over all five rounds. It’s clear to me that this innovative and accessible competition is elevating the profile of track cycling to a whole new level. We are confident that it will inspire people across the globe to continue following this exciting sport.”

STANDOUT DATA FROM ROUND 5

Mark Stewart and Harrie Lavreysen’s late bursts to win their respective Men’s Scratch and Sprint races provided a great insight into the differences between sprinters and endurance riders.

Both stars produced similar cadences to propel themselves to victory. Stewart clocked 132 revolutions per minute while Lavreysen achieved 136. It was power where the figures really opened up – 1,014 watts proved enough for Stewart to win his race while Lavreysen had to produce a whopping 1,927 watts to triumph in his.

Jennifer Valente meanwhile, proved once again that consistency is key when it comes to UCI Track Champions League success. The Women’s Endurance League winner achieved a maximum heart rate of 190 bpm in the Scratch and then clocked 185 bpm in the Elimination later in the night. It was Chloe Moran though, who achieved the highest heart rate of all the Women’s Endurance stars in Round 5, hitting 206 bpm with an all-out effort to win the Scratch.