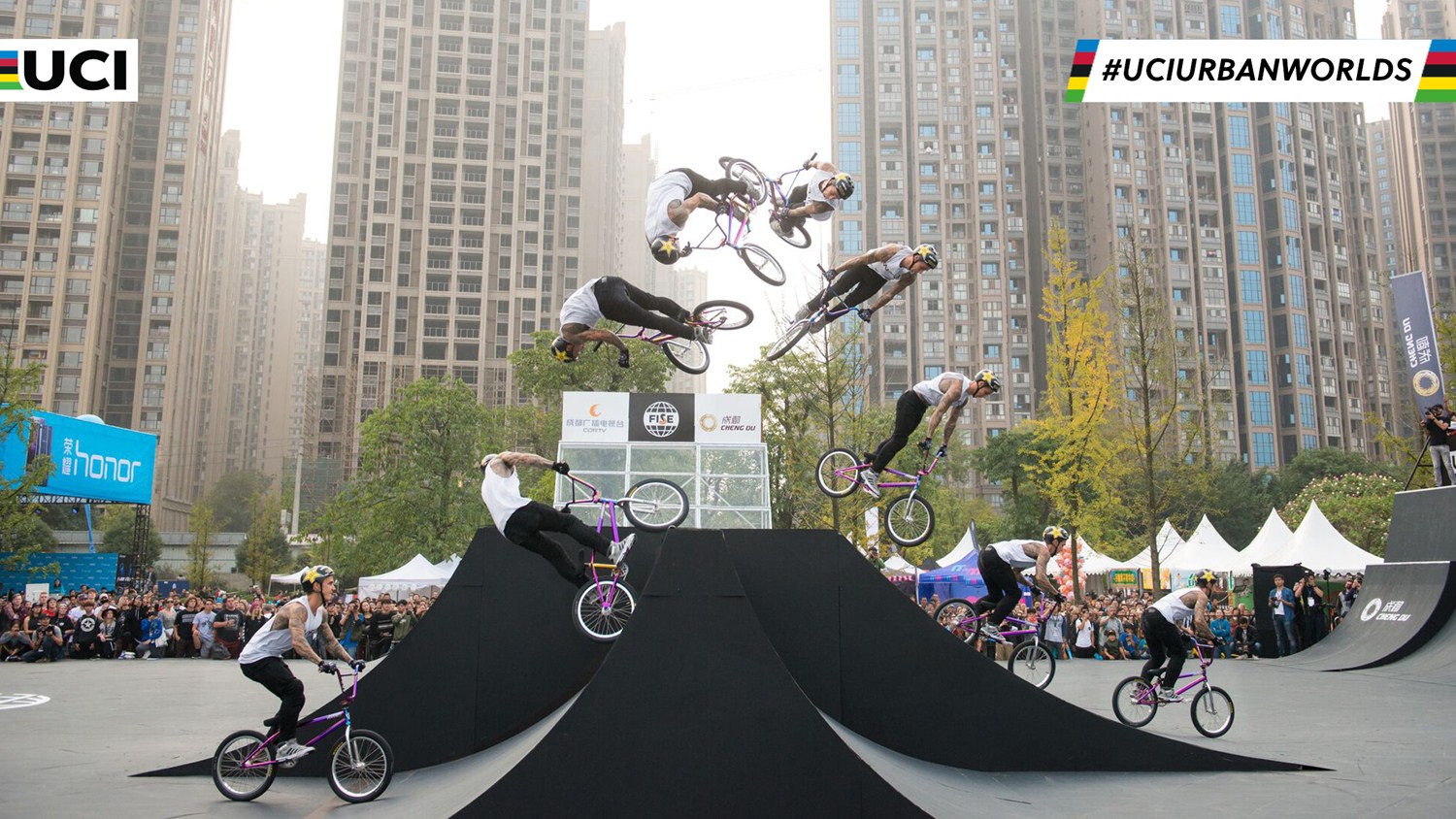 The 2017 UCI Urban Cycling World Championships get underway in Chengdu, China, on Wednesday November 8th. The five days of competition will see nine individual titles awarded across the disciplines of trials, BMX Freestyle Park and cross-country Eliminator (XCE). As in previous years, there will also be a national teams’ competition for trials.

Xinhua Park, in the heart of Chengdu’s old city centre, will provide the backdrop for the UCI Urban Cycling World Championships, which mark the first time that these three disciplines come together at the same time and at the same venue. The concept of this event emerged in response to cycling’s growing appeal amongst the younger population, which is increasingly converging on city centres to be part of the urban cycling scene.

Part of the UCI Mountain Bike World Championships from 2000 to 2016, trials will open proceedings at the UCI Urban Cycling World Championships in Chengdu with the national teams’ competition in which France will be looking to gain its third consecutive world title.

Virtually all the big names in trials have made the trip to China including the reigning UCI World Champions in the three individual Elite categories: Spain’s Abel Mustieles in the Men 20”, Great Britain’s Jack Carthy in the Men 26” and Germany’s Nina Reichenbach in the Women’s competition.

However, all three will need to be at the top of their form if they wish to retain their rainbow jerseys for another year. Mustieles, also winner of the 2017 UCI Trials World Cup, will be up against fellow Spaniards Benito Ros and Ion Areitio, who shared the podium with him in 2016. Among other athletes not to be overlooked is Swiss contender Lucien Leiser, fourth in last year’s Worlds and third overall in the 2017 UCI Trials World Cup.

Likewise, all three Men’s 26” medallists from last year’s Worlds – Carthy, France’s Gilles Coustellier and Kenny Belaey from Belgium – are on the Entry List for Chengdu. However, the French athletes will make their presence felt with triple UCI World Champion (2007, 2013, 2015) Vincent Hermance, and young Nicolas Vallée, who won the world title in the Junior category in 2016 and finished 4th overall in this year’s UCI Trials World Cup.

UCI World titles are also up for grabs in the Men Junior 20” and Men Junior 26” categories.

The winners of the BMX Freestyle Park competitions will go down in history as the discipline’s first ever UCI World Champions.

In addition, the UCI Urban Cycling World Championships will be the qualifier for the Youth Olympic Games (YOG) in Buenos Aires, Argentina, in October 2018. Riders aged 15 to 18 will be ranked in a special YOG qualification classification, which will be used to decide which countries will have the right to enter riders in the BMX Freestyle Park competition during the YOG.

The final two UCI World Champions to be crowned in Chengdu will be for Men’s and Women’s XCE on November 12th.

Austria’s Daniel Federspiel has been wearing the rainbow jersey for the last two years and will not give it up without a fight. He will, however, have to contend with last year’s silver medallist Simon Gegenheimer (Germany), who is also winner of this year’s UCI MTB Eliminator World Cup, as well as Lorenzo Serres (France) and Alberto Mingorance Fernandez (Spain) who finished 2nd and 3rd respectively in the 2017 UCI World Cup.

With UCI MTB Eliminator World Cup winner Lizzy Witlox (the Netherlands) also absent as she competes in the European cyclo-cross season, one of the favourites in Chengdu will be Switzerland’s Kathrin Stirnemann, who took silver behind Indergand in 2016. Norway’s Ingrid Sofie Boe Jacobsen and French athlete Coline Clauzure have also demonstrated their form this year with 2nd and 3rd places respectively in the UCI MTB Eliminator World Cup.