The UCI World Championship Road Race is all About the “Sprinters” 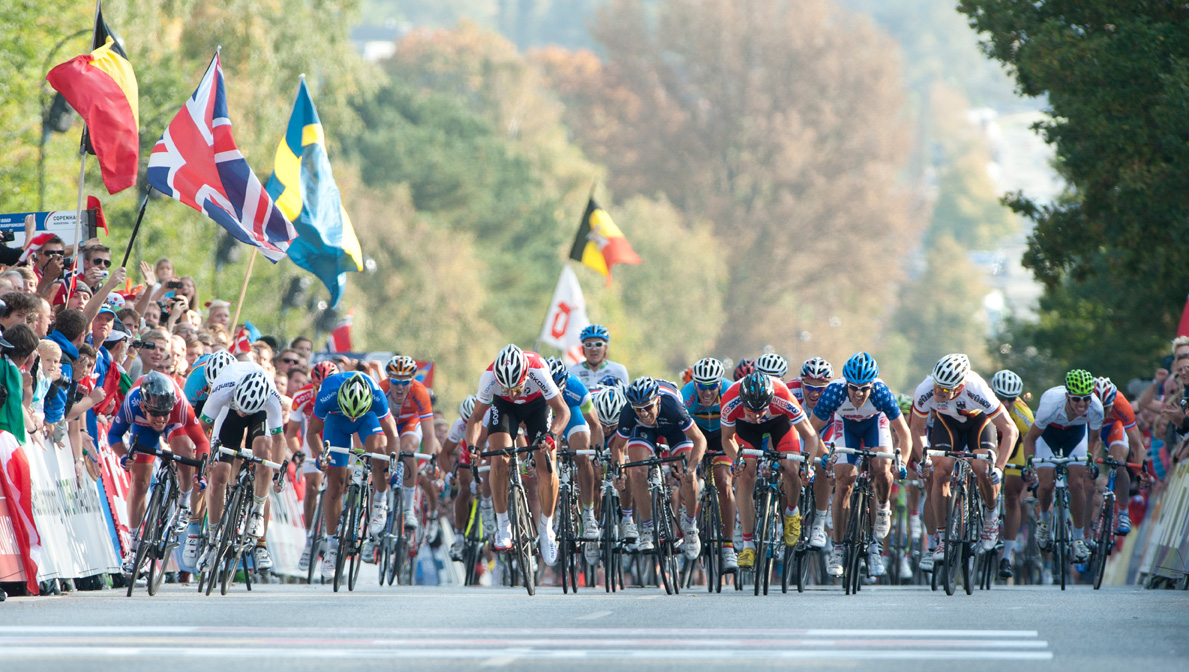 The UCI Road World Championships are the culmination of the season, when the top road athletes from nations around the world compete for the chance to don the rainbow jersey. Over the 90 years of championships since 1927 in Nurburgring, Germany, riders of every style have won – climbers, sprinters and Classics specialists.

While it is clearly true that any rider can win on a given day, certain circuits have proven to be more suited to specific styles of riders. In Doha, it is the sprinters, with their explosive turn of speed in the final 200 metres, who are expected to dominate.

On circuits with considerable climbing, sprinters are not generally expected to be part of the finish. However, if the climbs are not too severe their teams will protect them until the finish, when they can unleash their power.

The most recent circuit for sprinters was in Copenhagen, Denmark, in 2011, when Giorgia Bronzini (Italy) won the women’s title and Mark Cavendish (Great Britain) took gold in the men’s race. For Bronzini’s win, the Italian team had to chase away lone breakaway Clara Hughes (Canada), only catching her in the final few kilometres before the final short uphill finish, where the eventual winner held off Marianne Vos (the Netherlands) and German sprinter Ina Yoko Teutenberg. The British squad did an impressive job of controlling the men’s field, with Cavendish then outkicking sprint rivals Matt Goss (Australia) and Andre Greipel (Germany).

Remarkably, a year earlier, in Geelong, Australia, sprinters had also prevailed, despite a course that was less to their liking, with two lengthy climbs. Bronzini also beat Vos on that occasion in the women’s race. In the men’s competition, Thor Hushovd of Norway was one of the few sprinters to still be in the mix at the finish, and he took the world title ahead of Matti Breschel (Denmark) and Allan Davis (Australia).

Prior to 2010, we have go back to 2004, and Verona, Italy, when Oscar Freire (Spain) won his third world title ahead of Germany’s Erik Zabel and Luca Paolini (Italy), on a course with only one sizable climb in the middle, and a long descent before a flat run-in to the finish, which allowed sprinters to re-join the front of the race.

Two years prior to that, it was Mario Cipollini, possibly the greatest Italian sprinter in history, who won on a wet day in Zolder, Belgium, finishing in front Australia’s Robbie McEwen and Erik Zabel (Germany). The women’s title went in a sprint finish to Sweden’s Susanne Ljungskog – not a pure sprinter – in front of Mirjam Melchers (the Netherlands) and Joane Somarriba (Spain).

Now it is the turn of Doha. Will we see a bunch sprint, with a dozen or more of the fastest road riders in the world bearing down on the finish line? Or will a non-sprinter manage to break away to cross the line solo?