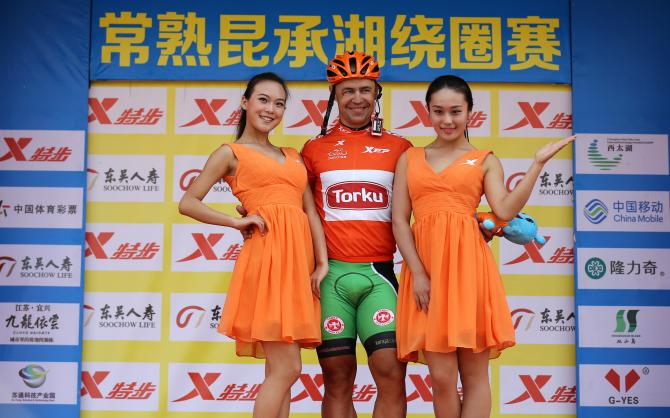 "I don’t want to annoy the other riders," Metlushenko said after the finish. "But for ten years, I’ve been reading the bible every day. I always take what God gives. If it was a bunch sprint again today, it’s because God wanted it to be like this. But I felt ill when I woke up this morning, so I was hoping for a quiet stage. The break that went was good for us."

A lead group containing Kevin Peeters and Klaas Sys, Robert Sweeting and Francisco Mancebo, Josh Prete, Jesus Del Pino, Grégoire Tarride and Volodymyr Zagorodny got a enjoyed a gap of 1:53 over the main field until the final with 16 kilometers remaining – when everything came back together.

"I received the information that the wind had picked up and we’d face it in the last 300 metres," Metlushenko explained. "Kankovsky went early and he remained blocked by the wind. I was perfectly led out by my guardian angel Sergey Grechyn."

"I had to try something from far out because of the Ukraine team being very active in the last kilometer," said a very disappointed Kankovsky who won that same stage last year when luck was on Dukla Praha’s side with his team-mate Milan Kadlec winning the overall classification in Changshu.

"This time we did everything perfect," commented best young rider Jesse Kerrison who crossed the line in fourth place. "But we’re still learning the lead out I guess. The Asian style is different from the Australian style because here, 35 guys are up there for sprinting while in Australia, five remain in contention at the very end. It was good to know that I was much quicker than Boris Shpilevskiy who finished third yesterday. Hopefully we’re not too far off."

"Well, that was Bos and his Belkin team, who achieved something exceptional," the Ukrainian moderated. "We’re a bit different. My Turkish teammates have been one and half month without racing. I’m happy to be able to sprint like that at my age against riders who are young, experts or from Pro Continental level. Shall I get the record of five in a row, I’ll take it with great pleasure. I’ll try. Last night I cried because my wife had read my comment about her on the internet and she was full of emotions, so it gives me the motivation to keep the momentum."