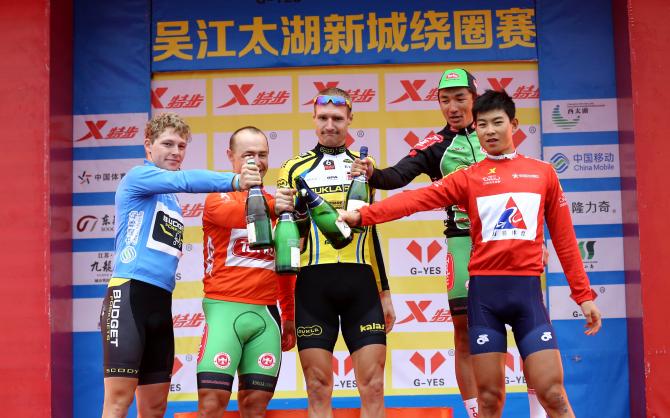 Yuriy Metlushenko won the 9th and final stage of the 2013 Tour of Taihu today – sealing the overall race victory. Today’s win marked the Ukrainian rider’s 5th stage win in this year’s race. Moreover, he set a record for the fastest average speed in a stage race this year at 47.507km/h for a distance of 937.9 kilometers – surpassing Mark Cavendish’s achievement of 47.46km/h for 732.2km in this year’s Tour of Qatar in February.

"This was my third participation to the Tour of Taihu Lake and I’ve always loved this race," Metlushenko said after the grand finale at Wujiang Taihu New City. "It’s a very important race and this comes as a very important victory in my career. I feel a lot of emotions. I’m almost crying because I’ve gone through different feelings through the nine days of racing."

Today’s stage was not without it’s problems for the Metlushenko however. The veteran rider crashed after the second lap. However, he quickly managed to regain the lead group of riders containing Altanzul Altansukh, Joao Pereira , Lars Pria and Francisco Mancebo.

"Other teams like Dukla Praha and Crelan-Euphony closed the gap at the end," Metlushenko continued. "I don’t know exactly what happened in the final sprint because I only followed my lead out man Sergey Grechyn but I know it worked to perfection. We rode above 60km/h with a three-quarter tail wind and my teammate Ahmet Örken was strong enough to take the third place."

For the second day in a row, Örken shared the podium with his teammate with a third place finish.

"I felt strong and followed Alois according to the plan. The Tour of Taihu gives me a lot of confidence after the solid season I’ve had this year with 65 days of racing including more than 50 internationally."

Indeed, the results for the Torku Seker Spor team went beyond their expectations in this year’s race.

"Initially, I came here with the ambition of winning one stage like last year," Metlushenko reminded. "But I noticed on the eve of stage 1 that I was given the back number 91 so I wondered if it was a sign that after nine stages I could be first, and now I am. I didn’t say it loudly for my rivals not to know about it, but I was sick for stage 4 and stage 5. I had fever at 38°. I was close to pulling out, but as I was leading the race, I kept going. It’s hard to be away from home and my wife Natalia for racing in China for almost one month. That’s why it makes me so emotional to be an overall winner at my age – 37."