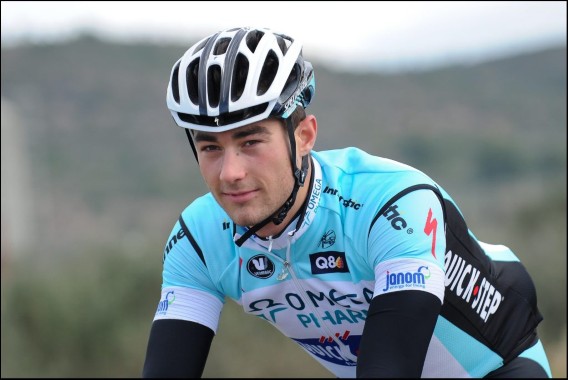 Omega Pharma Quick-Step’s Guillaume Van Keirsbulck continued his strong season at the final stage of Driedaagse van West-Vlaanderen on today. The young Belgian bridged to an escape group that included two of his teammates, Andrew Fenn and Julian Alaphilippe, with less than 23 kilometers remaining.

Van Keirsbulck was just 14" back in the overall, in 6th place, going into the final stage. Sensing the possibility of a double victory, he attacked with about 5 kilometers to go. He was able to hold his advantage all the way to the finish line, sealing the 15th win for OPQS this season. He finished 2nd in the GC to Gert Joeaar (Cofidis), who held onto his lead for the overall victory.

"I am really happy to finally grab a victory," Van Keirsbulck said. "It was a very strange race because before entering into the local circuit I had a flat tire, about 5km before the circuit. Fortunately, Iljo Keisse helped me to come back. It took me a while but I was able to make it. Then in the local circuit there was a breakaway that included my teammates Fenn and Alaphilippe, and they had about 30 seconds of an advantage. At a certain moment I went solo to try to bridge. Fortunately, Fenn waited for me and we returned to the group together. We had three riders out of the breakaway with more or less 22km from the finish. In the last kilometers, at 5km to go, I decided to go alone. The last 500 meters I was really suffering because there was also a headwind. I was a bit scared that they would catch me, but I made it to the line. I was really happy I had also the time to celebrate. I am happy also because my condition is very good. The entire year I’ve been riding well. I had a good feeling this season even if I have a back problem I am trying to solve. It’s nice that all the work I’ve done is paying off now. It’s my first victory of the season, but also the first time I’ve won in two years. So, I really want to enjoy this victory. It’s a pity that I lost the GC by a few seconds, but today let me enjoy my stage win in front of my public in West-Vlaanderen."