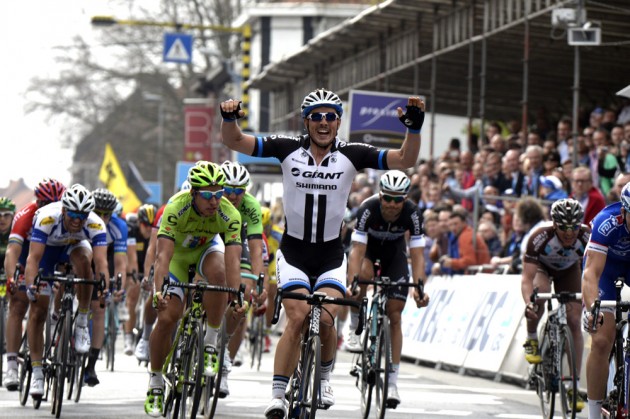 John Degenkolb won this year’s Gent-Wevelgem classic by the slimmest of margins today, after nixing Arnaud Demare on the line by a mere half a wheel length- to claim the victory.

A late breakaway group containing Silvan Dillier, Stijn Devolder and Andrey Amador was reeled in by the peloton as the race entered into the final kilometer. From there, a crash took place midpack in the peloton, that consequently brought disarray to the sprint – causing  defending champion Peter Sagan to lose his gauge of  both Degenkolb and Arnaud Demare, as both riders proceeded to accelerate past him at the line.

“This is one of the big classics, I am very happy to get this victory. It’s the next step for me,” said Degenkolb. “I won a WorldTour race in Hamburg, and no disrespect to them, but this is a really big, big race. It’s great to win here. It was very hectic in the finale. I was in good position and could make my sprint.”

However, with 70 kilometers remaining, the escapee’s advantage had been capped at just two minutes. Another 10 kilometers further, and their gap had been reduced to only 30 seconds.

As the race headed into the final 50 kilometers, a looming peloton prompted Boaro to try and ride clear.

On the ascent of the Kemmelberg, the chase group was met with the first of today’s two crashes, wherein Luca Paolini and a number of other riders were involved. But, as Boaro crested the Kemmelberg alone, a determined Sagan, Fabian Cancellara and a lingering Tom Boonen, continued to lead the fractured chase group. And, by the 37 kilometer mark, they had Boaro in their sights.

Shortly thereafter, Boaro was reeled. At that point, Dillier tried to make a go of it, at the same time drawing out Devolder and Amador. And, from there, the three riders succeeded in building up a slight lead over the chase.

Guillaume van Keirsbuick quickly tried to bridged himself to the eacapees, but to no avail.

With 15 kilometers remaining, Cannondale, Giant-Shimano and Lotto-Beliosol seized control of the chase, as the three escapees still clung to almost a 30 second lead.

With 10 kilometers to go, despite Garmin-Sharp, Tinkoff and Omega Pharma now contributing to the chase, the trio was till holding onto their half minute advantage.

However, as Lotto, Cannondale and Omega Pharma entered into the pursuit, the escapee’s gap dwindled to just 12 seconds – as the race entered the last 3 kilometers.

However, as the race headed under the final kilometer banner, the escapees were caught. It was then, that chaos struck the field, as a major crash took place just as the sprint was getting underway.

Unforunately for Sagan, his momentum was imparted during the chaos, and the Slovak rider was left to watch Degenkolb and Demare power their way past him to a narrow victory.