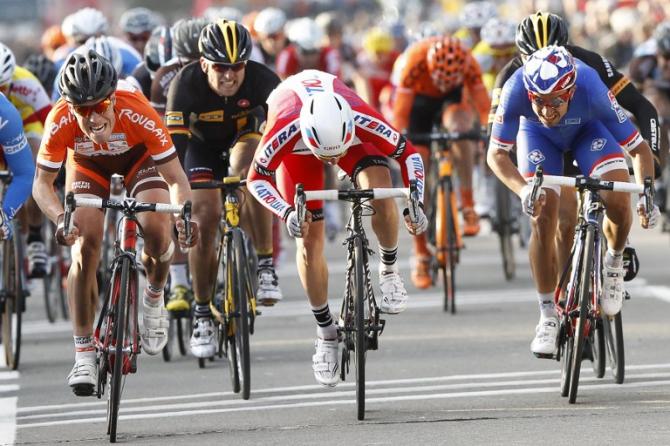 Today’s stage saw a breakaway group containing Sijmens, Van de Maele and Hubert, get underway during the first hour of racing. And, by mid-point in the race, the trio succeeded in building up a three minute lead over of the field.

However, back in the peloton, Omega Pharma-QuickStep began upping the pace, which quickly began to eat away at the escapee’s lead. And, by the 70 kilometer mark, they had been completely reeled in.

At one point, six riders from QuickStep, Julian Alaphilippe, Andy Fenn, Iljo Keisse, Peter Vakoc, Martin Velits and Guillaume Van Keirsbulck, along with a few others, managed to get clear of the peloton – to form a lead group of 11 riders off the front. However, their escape was short lived also, as the peloton succeeded in reeling them – after just 10 kilometers.

Inside the final 50 kilometers, yet another QuickStep rider, Thomas De Gendt, decided to initiate a move of his own, that was quickly joined by Alexis Gougeard. Again, within 20 kilometers, the peloton succeeded in reel them in as well.

As the peloton entered into the final finishing circuit, a group of ten riders containing Greg Henderson (Lotto-Belisol), Sergey Lagutin (Rusvelo), Lloyd Mondory, Julian Kern (Ag2r-La Mondiale) and Sébastien Delfosse (Wallonie-Bruxelles), succeeded in making their way clear. But, again, a determined peloton also reeled them back in the remaining 10 kilometers.

During the final 2 kilometers, the Russian champion Isaichev threatened to upset the field when he attacked off the front.

However, Isaichev’s lead only lasted into the final kilometer, before he was caught. From there, Bouhanni and Vantomme began to vie for position.

In the final 200 meters, Bouhanni appeared to be well-positioned on the wheel of his lead-out man – Sebastien Chavanel. However, as the field came around the final bend, Vantomme anticipated the French rider’s move by launching a sprint on the opposite side of the road.

“I like this race a lot. I’m done it a few times and the uphill finish is perfect for me. I’ve had good results here before now, but never the win,” Vantomme said as he waited to mount the podium.

Vantomme’s victory was his first in over six years, since he won a stage in the 2008 Tropicale Amissa Bongo. In the intervening years,  Vantomme spent four seasons in the WorldTour with team Katusha, but now finds himself with greater opportunity riding for the Continental Roubaix Lille Metropole team.

“I have carte blanche with my new team and I could do what I wanted today,” he said. “It was hard to stay near the front in the finale, but I was well-placed with 200 meters to go. I launched my sprint and I managed to win. I could feel my former Katusha teammate Tsatevich coming up behind me, but I said to myself that he wasn’t going to come past.”

“Up to now, I’ve always been missing a little detail,” Vantomme said. “But today, I didn’t wait for Bouhanni or anyone else. I just did my own sprint.”