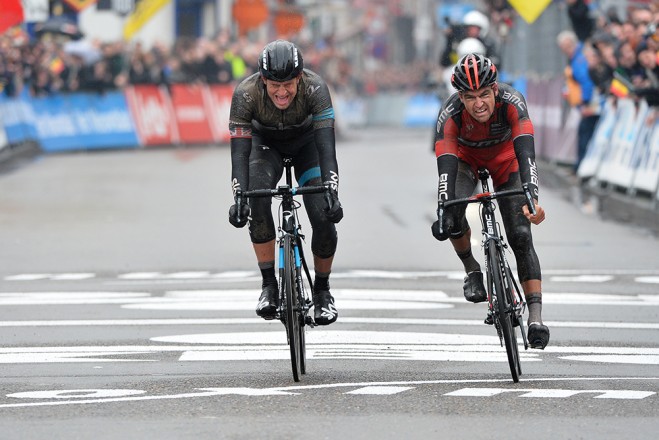 Today’s finale, saw Stannard and Van Avermaet with just an enough of a gap in the final kilometer to stave off a challenge from a three-man chase group containing Niki Terpstra, Sep Vanmarcke and Edvald Boasson Hagen.

In the closing 250 meters, Van Avermaet took the front early, but Stannard opened the sprint well enough in advance – to come around the BMC rider’s side to seize the victory.

Meanwhile, Stannard’s teammate Boasson Hagen proved to be the fastest of the chase group – taking third spot on the podium.

“I knew the guys behind had dropped off a bit,” said Stannard. “I felt strong … and I was confident for the sprint. I knew that at 300 meters I needed to wind it up a little bit and not too fast. I was just waiting for him to look the other way. It worked out well.”

Afterwards, Van Avermaet indicated that he was not only caught off guard, but foul weather also impacted his performance.

“I let myself be surprised,” he said. “I thought I could handle Stannard in the sprint. But he picked up a meter and I couldn’t catch his wheel.”

Boasson Hagen, who himself had been off the front with Terpstra coming out of the final stretch of cobbles, said the plan was always to get Stannard on the top step.

“Stannard was the main guy for today,” he said. “ I didn’t know if Stannard knew that I was behind, but that didn’t matter because he was the main guy and I was in a good position. I obviously knew he was in front, so I didn’t have to ride against him."

“I had good legs. I think I could have won the sprint if everything had come back together.”

Earlier in the day, race favorites like defending champion Luca Paolini and 2009 winner Thor Hushovd were not so fortunate, as both riders crashed out at various points in today’s race.

In addition, pre-race favorite Tom Boonen only managed to muster a disappointing 33rd place finish – nearly four minutes down from the leader(s).

"It was cold and wet while Tom just raced under the heat of Qatar and Oman. The temperature difference can explain some things,” he said.