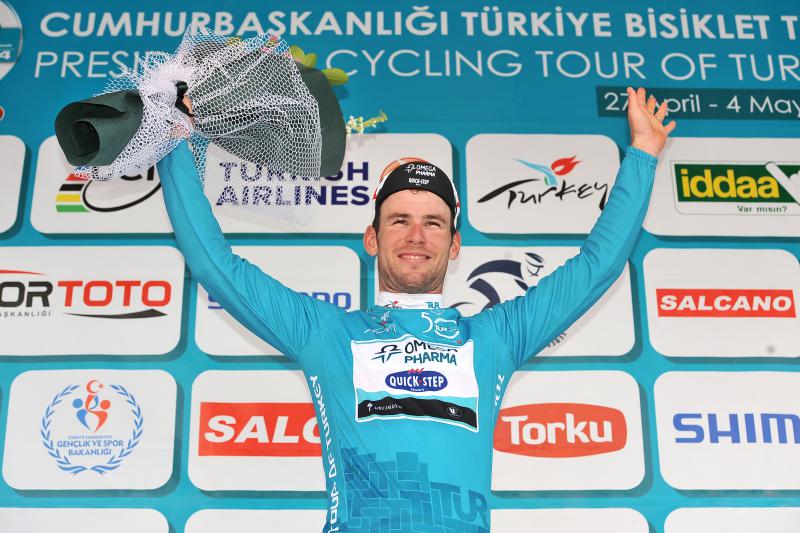 Following a high-speed lead out by his teammate, Mark Renshaw, in the final kilometer, Cavendish found himself perfectly positioned  to unleash one of his signature bursts of speed in the closing meters.

Meanwhile, Francesco Chicchi finished in second at about a bike length behind, while Niccolò Bonifazio rounded out the podium in third.

Following today’s results, Cavendish continues as the race leader. However, with no time bonuses awarded in the stage, Bonifazio took second spot in the overall GC, with Elia Viviani in third –  both with the same time as Cavendish.

The British rider had these things to say after today’s stage.

"Today it was a harder sprint," Cavendish said in the press conference. "It was slightly uphill, it was a headwind and it was big roads and it’s easy to get swamped, but Omega Pharma-Quickstep did an incredible job in the final – absolutely textbook. I’m super happy today. I couldn’t have done it without them."

"It’s been a tough couple of days for the guys…and we’ll try and get through tomorrow as best as possible but there’s no way I can even try and defend the leader’s jersey," he conceded.

Tomorrow’s stage is expected to have a dramatic effect on the general classification, as the race heads into the mountains with a 185 kilometer stage from Finike to Elmali.