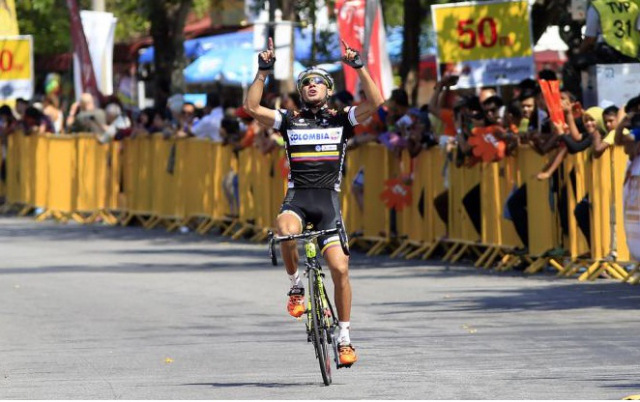 Duber Quintero not only made a perfect debut for his team and himself, but also scored a significant piece of personal history with his first ever win as a professional when he launched a solo attack to claim stage 1 of 2014 Tour de Langkawi today.

The 23-year old Team Colombia rider was part of an early breakaway that saw four riders make it to the finish over a minute ahead of the peloton in what was the least expected outcome for the short 101.1 kilometer stage around Langkawi Island.

Quintero was with United Healthcare’s Jonathan Clarke, Synergy Baku’s Irish champion Matt Brammeier and OCBC Singapore’s Goh Choon Huat in the break that went away after just two kilometers Terengganu Cycling Team’s Saiful Anuar Abdul Aziz was initially part of the breakaway, but dropped back with about 30 kilometers remaining.

Goh, became the first ever Singaporean to lead a classification in the Tour of Langkawi when he finished fourth to assume the lead in the Asian riders’ classification.

Quintero said he had decided to make the solo attempt in the final kilometer of the stage, and that saw Brammeier trailing to finish second, 22 seconds adrift of the young Colombian, while Clarke finished third. The main peloton finished 1:37  behind the leading quartet with Andrea Guardini of Astana beating Anuar Manan of Terengganu Cycling Team in the bunch sprint for fifth place.

"I have heard about this race before but this is my first time here and from the moment I arrived I have liked this place. I like the people, they are very friendly and the temperature is exactly like where I come from, so I wouldn’t mind coming back here for a holiday."

"My style of riding is usually to go on a lot of attacks, but I have not tasted victory until today. We were quite strong in the breakaway and we could keep up the pace and built a decent gap. With one kilometer to go, I felt that I had enough energy to have a go and I decided to try and I managed to drop the others and go for the win."

"I am usually a rider for the flat stages, but we have come here with a strong team and our target is definitely the overall title. We will see how it goes, maybe I can climb to try and defend the jersey when we get to the mountain."

Brammeier was going strong in the early part of the race, when he swept both categorized climbs to take the mountains jersey but suffered a bit from cramps towards the end of the stage.

"I have always struggled with cramps and today towards the end I was feeling it a little, but I tried my best not to show the others. I’m still glad that I got this jersey and we’ll try our best to keep it," said Brammeier.

Goh said he now aims to finish on the podium after claiming his bit of personal history."

"I’m happy with my performance today, especially racing with the big boys and to get the jersey. Personally I feel my form is quite good, so I will try to finish on the podium," said Goh.

Stage 2 of the Tour of Langkawi will cover 134.5 kilometers from Sungai Petani to Taiping, with another flat stage providing an opportunity for a sprint finale again.