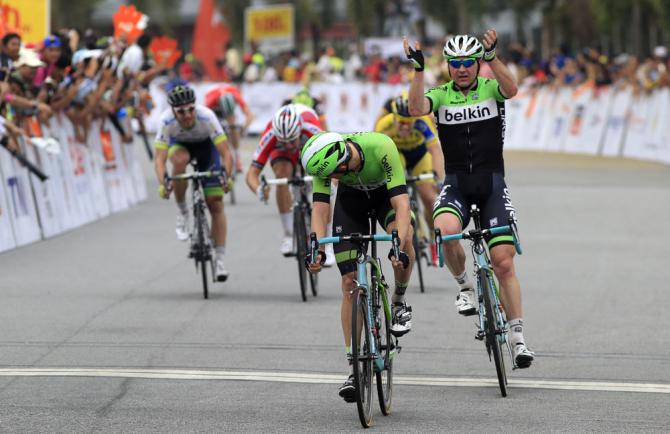 Theo Bos rose above the rest to win stage 7 of the 2014 Tour of Langkawi today, covering 230.1 kilometers from Kota Tinggi to Pekan.

Bos made good use of tactics heading into the finish line in Pekan to deliver his second stage win of this year’s edition –  after winning Stage 2.

Bos was led-out by the experienced Australian Greame Brown, who himself has 9 LTdL wins to his name, as the peloton was swept aside in order to make room for the bunch sprint.

"I had some information from the team car and from those who were already at the finish line, plus we had studied the finish profile before the stage, so I knew exactly where there would be turns and corners, I knew there would be a turn with 500 meters to go," said Bos.

After opening up a gap of more than 4 minutes, which put Monsalve in the virtual leader’s position, a determined peloton began reeling in the escapees. And, with 15 kilometers remaining, they were caught – thus preserving the yellow jersey of Tabriz Petrochemical’s Mirsamad Pourseyedigolakhour.

At the line, Bos finished well ahead of Orica-GreenEDGE’s Aidis Kroupis and Leonardo Duque of Colombia.

"Heading into the finish, we knew that Kroupis was without Lancaster, who would have been tired after the breakaway. So, we believed we had a bit of an advantage," said Bos.

"We have more stages to look at from tomorrow with the race being flat all the way to the finish, so we can definitely be looking at more wins."

Tomorrow will present another long stage, covering 202.3 kilometers  from Kuantan to Marang, with another bunch sprint expected.