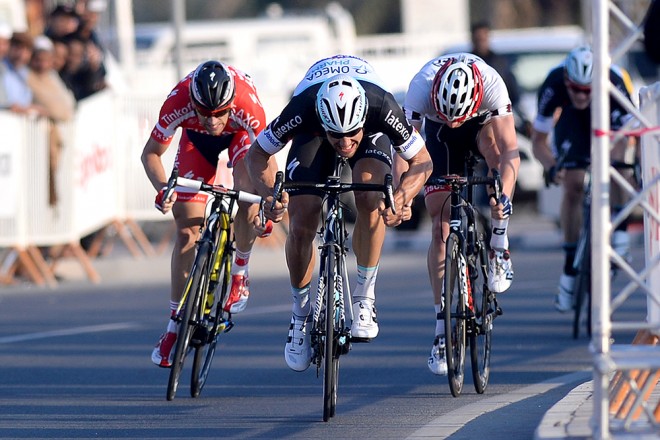 The Omega Pharma Quickstep team managed one of the most impressive performances in the history of the Tour of Qatar today. With all eight of it’s riders in the decisive break, with fifty kilometers to go, the Belgian team went on to capture stage victory thanks to Tom Boonen, while his team mate Niki Terpstra kept his overall leader’s jersey.

The 152 riders of today’s stage, gathered at the Al Sheehaniya Camel Race track for the start of stage 2. Today’s stage featured 157.5 kilometer route to Al Khor Corniche. And, despite several vain attempts, the peloton remained intact until the 13 kilometer mark, when each team ushered their "strong men" to the front – which ultimately lead to a breakup of the peloton – with a sizable group of 40 riders going clear. However, at the 22 kilometer mark, the group was caught. Still, a  defiant Philippe Gilbert and Kiel Reijnen attempted a subsequent break of their own, But, they too were caught less than 10 kilometers later.

Nicolas Maes claimed the first intermediate sprint at the 34.5 kilometer mark -ahead of Niki Terpstra and Aidis Kruopis.

From there, the peloton began to splinter, with a sizable mix of riders from the Omega Pharma Quickstep and Tinkoff-Saxo teams taking the front.

At the 104 kilometer mark, a group of 23 riders rode clear of the field, and subsequently caught Smukulis.

As the stage continued, the Omega Pharma team took control of the race, and the only riders outside of Belgian team who were able to stay onboard were, Popovych, Boom, Wagner, Eisel, Rowe, Stannard, Guarnieri, Smukulis, Kruopis, Bennati, Breschel, Juul Jensen, Kroon and Morkov.

From there, Roelandts claimed the second intermediate sprint of the day ahead of Boonen and Terpstra – with Greipel, Gilbert and Démare 25 seconds behind them. Further back, was Fabian Cancellara at 1’45, who got caught up behind crash.

With 20 kilometers remaining, the lead group held a gap of more than half a minute over the chase, and 3’10 over the group containing Cancellara.

With the Omega Pharma-Quickstep working hard, the gap remained the same with 5 kilometers to go.

Wagner and Boom were the first to attempt an attack in the closing kilometers. However, the duo were caught just under the 1 kilometer banner. Is was then, that Boonen initiated a sprint toward the finish that proved to be incontestable by his two challengers – Morkov and Roelandts.