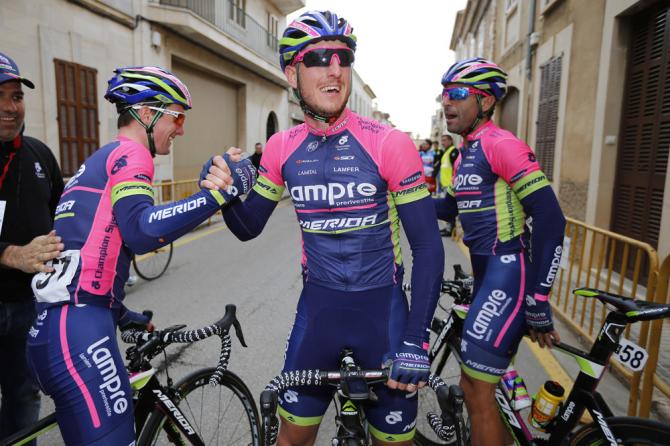 Sacha Modolo claimed back-to-back wins at this year’s Three Days of De Panne, after winning stage 3b in a sprint finish today.

The Italian rider succeeded in holding off a late challenge from Andrea Guardini, to beat his fellow countryman on the line.

Kenny van Hummel finished in third place, following a late crash that split the field in the final corner and sidelined Kenny Dehaes.

Meanwhile, Gert Steegmans held onto his overall lead ahead of this afternoon’s individual time trial. And, with second place GC rider Oscar Gatto’s failure to start this morning’s stage, the Belgian rider will now face challenges from Kenneth Van Bilsen and Niki Terpstra.

Gatto wasn’t the only rider to pull out of the race on the final morning, as   Arnaud Demare, Laurens De Vreese and Johnny Hoogerland also failed to start.

Today’s stage saw a breakaway group containing Joren Segers, (Team 3M), Jaap De Man (Team 3M), Stijn Steels (Topsport Vlaanderen – Baloise), Jay Robert Thomson (MTN – Qhubeka) and Maaskant (UnitedHealthcare Professional Cycling Team), get underway around the  20 kilometer mark. And, at one point, the escapees built up an advantage of 3:39 over the peloton. But, as the race entered into the final 25 kilometers, the breakaway group’s lead had been reduced to 2:36.

With a minute shaved off of their time, and a looming peloton behind them, Segers and Thomson decided to ride clear of their breakaway companions.

As the two leaders crossed the finish line for the first time, their lead had been reduced to a mere 14 seconds, and shortly thereafter they were caught.

From there, Michael Vingerling attempted an attack of his own inside the final 5,000 meters. However, a watchful peloton always kept him within their grasp.

As teams started positioning themselves for what was building up to be  a sprint finale, Giant-Shimano looked to be in the best position with their man Kittel at the front. But, despite the Dutch team’s control, Kittel lost his position when a rider from Astana moved into his "line". Lampre subsequently took over control, moving Modolo into perfect position as the field enter the final corner.