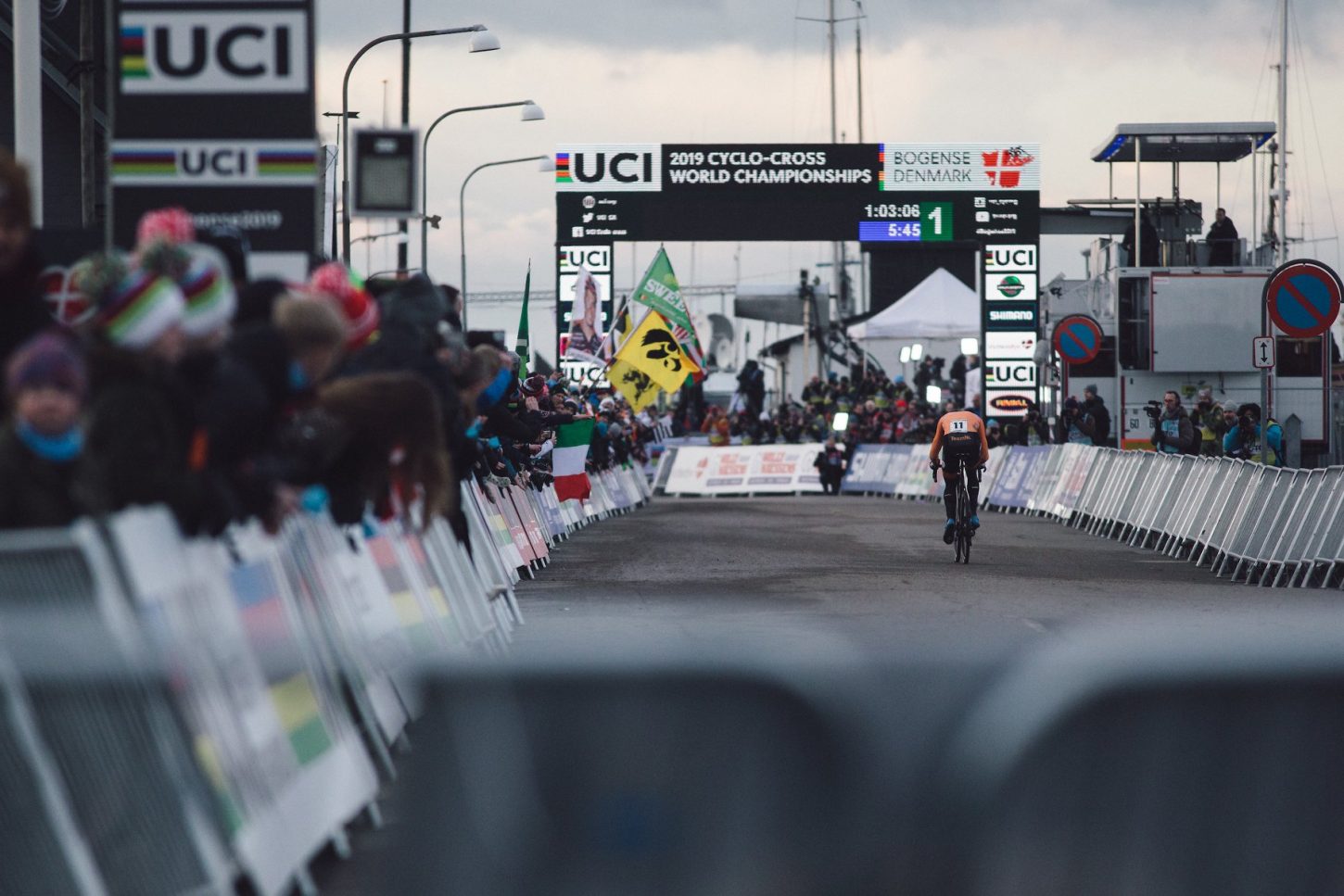 Large crowds gathered on a sunny but cold day in the small coastal town on Funen Island. The win for Mathieu Van der Poel in the Men Elite category was the icing on the cake after his season-long domination. Inge van der Heijden surprised by topping an all-Dutch podium in the Women Under-23 category.

After winning nearly every race he took part in this season, Mathieu Van der Poel was the favourite to win the race in the Men Elite category. Then again, in his last three UCI Cyclo-cross World Championships Van der Poel was unable to hold back Wout van Aert (Belgium) from winning and wearing the rainbow striped jersey for three long years. The opening lap of the race showed that the Belgian riders were ready to battle for the jersey on the 2.6km course along the Bogense seafront. Defending UCI World Champion van Aert and Telenet UCI Cyclo-cross World Cup winner Toon Aerts took the initiative among the starting field of 58 riders at the beginning of the 12-lap race. Eight riders featured in the lead group after two laps, including Van der Poel, van Aert and Aerts but also Dutch riders Lars van der Haar and Corné van Kessel, Belgians Quinten Hermans and Michael Vanthourenhout, and a surprisingly strong Felipe Orts Lloret (Spain).

The race blew further apart during the third lap when Van der Poel accelerated away on the technically difficult off-camber climb at the back end of the course. Toon Aerts was on the Dutch rider’s tail but struggled to find grip. Van der Poel quickly collected a lead of six seconds as he hit the fourth lap. Behind him, van Aert took over the command from Aerts in the pursuit of Van der Poel. After a captivating lap-long pursuit at 28.18 km/h, van Aert set the fastest lap time of the weekend with 5:32 which was just enough to bring him back to Van der Poel’s wheel. By then, the rest of the field was trailing the duo by 25 seconds. Aerts hit the red zone while trying to close the gap and as it turned out, van Aert was also reaching his limit. The defending UCI World Champion slipped away on the off-camber climb and this time Van der Poel was gone for good. Van der Poel flawlessly tackled the technical course and on every lap was able to put five more seconds into his lead. The 24-year-old Dutch ace captured his second World title in the Men Elite category, four years after his first win in Tábor (Czech Republic). Halfway through the race, Aerts escaped the large chase group and slowly worked his way back up to van Aert. The Belgian duo hit the final lap together in a battle for the silver medal. Aerts appeared to have the edge, but as he slipped away in the final muddy corner of the Bogense course, van Aert powered forward and captured second place ahead of Belgian Champion Aerts.

In the Elite Women’s Race, the Dutch riders dominated the first half of the race in more slippery conditions than the two previous races. Seven-fold UCI World Champion Marianne Vos (the Netherlands) took the best start, with fellow Dutch athlete Denise Betsema also getting away well. The latter even opened up a gap but yet another of her Dutch team mates, European Champion Annemarie Worst, closed that back down at the end of the opening lap. Worst, Betsema and Vos continued to take the initiative but defending UCI World Champion Cant and the surprisingly strong mountain bike specialist Jolanda Neff (Switzerland) held their wheels. Dutch Champion Lucinda Brand also featured among the front riders, despite having to fight her way back on several occasions after slipping away on the course. Halfway through the race, Cant took the initiative for the first time, costing Neff her spot in front. The Swiss rider lost momentum on one of the multiple slippery corners. With time running out, Cant was clearly in control of the race and the Dutch riders failed to come up with a plan. Halfway through the penultimate lap Cant completed a smooth passage on a section with power climbs and suddenly found herself with a gap over Betsema, Vos, Worst and Brand. Cant continued her efforts and the Dutch riders failed to bring her back down. Betsema and Worst faded away while Brand blew Vos off her wheel when hitting the final lap. The small gaps remained the same until the finish line with Cant winning ahead of Brand and Vos.

The Men Junior category race kicked off proceedings in Bogense on Saturday morning. Tulett immediately marked the first accelerations in the starting field of 71 riders, countering moves made by Luke Verburg (the Netherlands), Pim Ronhaar (the Netherlands) and later also Gonzalo Inguanzo Macho (Spain). Verburg crashed at one of the first twisting sections during the opening lap, holding up Tom Lindner (Germany) and UCI World Cup winner Witse Meeussen. The latter recovered quickly and featured among the lead group of ten riders at the end of the opening lap. Belgian Champion Ryan Cortjens charged forward in the second lap and only Meeussen, Ronhaar and Tulett were able to hold his wheel. Halfway through the race, Tulett seized his moment to move to the front. Ronhaar quickly faded away and at the off-camber climb Cortjens and Meeussen also slipped back. Tulett continued to open up the gas and distance the Belgian duo in the closing laps. Meeussen won the battle for second place from Cortjens. Thibau Nys (Belgium) bounced back from an early puncture but finished just off the podium spots.

Defending UCI World Champion Eli Iserbyt (Belgium) and Telenet UCI Cyclo-cross World Cup winner Thomas Pidcock were the top favorites in the Men Under-23 category race. Iserbyt, the double UCI World Champion (Heusden-Zolder 2016 and Valkenburg 2018), set the pace early on but was unable to cause much damage. Pidcock was riding near the front but struggled with his gears and switched bikes at the beginning of the third lap, tempting Iserbyt to accelerate once again. Iserbyt hit the fourth lap with a bonus of six seconds on the first chase group. A record-breaking third World title in this category suddenly seemed very possible. Iserbyt’s dreams were shattered when Pidcock unleashed his power. At the long crosswinds section along the seafront he blew everybody away from his wheel and blasted by Iserbyt. Pidcock quickly opened up a gap of twenty seconds and he kept that gap under control in the final part of the race, riding to his first World title in this category. The Telenet UCI Cyclo-cross World Cup ranking was repeated with Iserbyt finishing as runner-up ahead of Antoine Benoist (France).