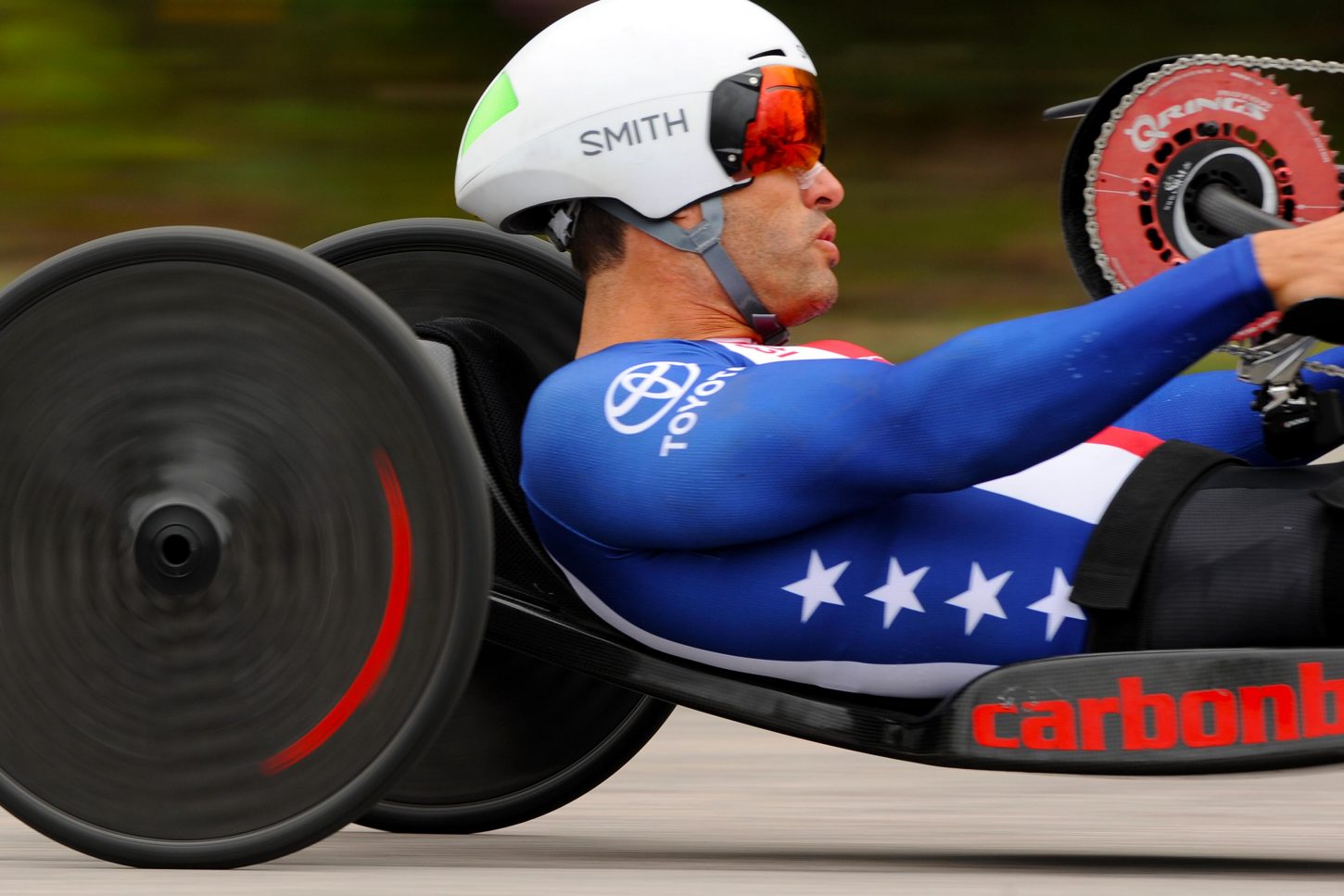 The 2019 UCI Para-Cycling Road World Cup started in Corridonia, Italy, in May and finished with round three in Baie-Comeau, Canada, mid-August. In-between, the world’s best para-cyclists did battle in Ostend, Belgium: it was a fittingly exciting calendar in the prelude to the Tokyo 2020 Paralympics. Highlights of the three-round series were many – here are some of the finest…

Thirty-nine-year-old Dutch tandem rider Vincent ter Schure made up for an injury-plagued 2018 by enjoying a clean sweep of three wins in the men’s tandem time trial with pilot Timo Fransen. The pairing even finished the World Cup season with victory in the Baie-Comeau road race. This consistency in the UCI World Cup, in addition to results elsewhere, sees them currently top of the UCI rankings and sets them up beautifully for Tokyo after enjoying gold at the Rio Paralympics, 2016.

Dutch success continued thanks to the formidable Jetze Plat in the handbike 4 sports class. The 28-year-old won individual time trial gold in Corridonia and Ostend – and repeated the feat in the road race over the same two rounds. Plat won handbike and paratriathlon gold at Rio. As he told us recently, “I’m looking for a minimum of two golds in Tokyo.” It’s hard to bet against Plat on this form.

Belgium’s Maxime Horides led the handbike 1 sports class. The 23-year-old athlete took individual time trial honours in Corridonia and Ostend, as well as winning the H1 road race in Baie-Comeau. Horides trains and competes for his club, Rolling Lions, and he certainly had his claws into the competition. Special mention must go to Horides’ Ostend performance where he won the 18km time trial by nearly 3mins.

Chapeau also to Russia’s Sergei Pudov, who’s enjoyed a staggering World Cup season, winning five golds across the men’s C4 competitions. Great Britain’s George Peasgood won the remaining gold: in the time trial in Ostend. Such is Pudov’s power that the 32-year-old finished 37th overall in the time trial at the Russian (able-bodied) Championships, despite his lower-limb impairment. Pudov’s victories in Canada see him head the overall rankings.

Spain’s Sergio Garrote turned 40 years old this year. He came to the sport relatively late – and is going from strength to strength: he dominated the H2 category, matching Pudov’s feat by taking five of the six road-race and time trial golds available across the three rounds. Only William Groulx prevented a 100% record by claiming the road race gold in Canada.

The women’s tandem competition has proved a fascinating affair with the two standout stars being Poland’s Iwona Podkościelna and Great Britain’s Lora Fachie. Thirty-one-year-old Podkościelna  started the season strongly, winning both the time trial and road race in Italy, before Fachie replicated the double success in Canada. It means Podkościelna  currently leads the overall rankings, though Fachie is hard on her heels.

Things are more clear-cut in the women’s H4 sport class as the irrepressible Jennette Jansen, from the Netherlands, won all six road race and time trial events she competed in over the three rounds. At 51 years old, Jansen continues to dominate the H4 category, showing the form that saw her win her first Paralympic medal (silver) all the way back in 1992 at Barcelona.

Age has also proved no barrier to success for Australia’s Carol Cooke (T2), who at 58 years old won road race and time trial titles in Ostend and Baie-Comeau. German athlete Jana Majunke took double gold in Italy with Cooke settling for second in both events. The Netherlands’ Carmen Koedood enjoyed an incredible UCI World Cup season, winning all six events in the H2 sport class. The 23-year-old was unstoppable and is one to watch for Tokyo 2020.

The same goes for Italy’s Ana Maria Vitelaru (36), who currently heads the UCI rankings in the H5 field thanks to her recent double second in Canada, which came off the back of double gold in Italy (she didn’t compete in Ostend). And let’s not forget Canada’s Shelley Gautier who, at 51, won four T1 titles in Italy and Canada. Gautier also finished second at both Ostend events.

And a final UCI World Cup congratulations to the likes of Team USA’s Shawn Morelli (C4), Australia’s Paige Greco (C3) and Austria’s Yvonne Marzinke (C2) who each won multiple events across the 2019 season. We also salute all the winners we haven’t shone the light on here, and their fierce competition, for making the 2019 World Cup season one to remember.