Arbitration Set for Johan Bruyneel with US Anti-doping Agency 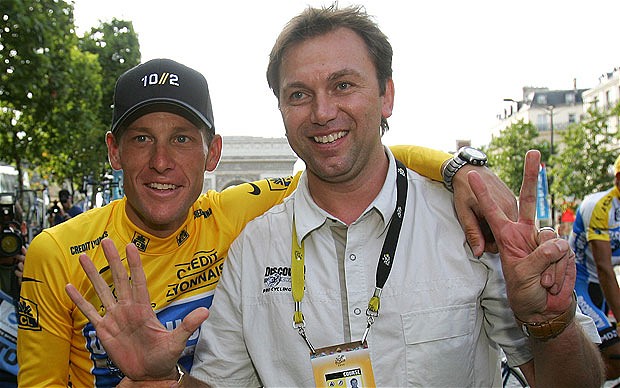 After months of waiting, sources say that the US Anti-doping Agency has set a date to bring Johan Bruyneel, Pedro Celaya, and Jose "Pepe" Marti before an arbitration panel. The arbitration is set to occur in London on December 16-20th, 2013.

In the charging letter from last year, USADA claims that "numerous riders will testify that Mr. Bruyneel gave to them and/or encouraged them to use doping products and/or prohibited methods, including EPO, blood transfusions, testosterone, hGH and cortisone during the period from 1999 through 2007."

Pedro Celaya was the Postal Service team doctor until 1999 when Lance Armstrong had him replaced because he felt the doctor wasn’t aggressive enough with PED use. Jose "Pepe" Marti was the team trainer on the Postal Service and Discovery Channel team.

USADA handed down a lifetime ban against Marti, which he accepted. USADA charged Marti with transporting PEDS "including EPO, testosterone, human growth hormone (hGH) and cortisone from Valencia, Spain to locations where the riders were living in Europe including Nice, France and Girona, Spain and at training camps and cycling races."

In an earlier report, USADA’s Travis Tygart told the media,"The respondents (which included Marti) chose not to waste resources by moving forward with the arbitration process, which would only reveal what they already know to be the truth of their doping activity." Therefore, it’s speculated that Marti is being brought before the London arbitration panel in order to give testimony against Bruyneel.

According to an article in the Dutch newspaper, De Telegraaf, back in January, Bruyneel wanted "to put everything into the right context and correct the false image that the USADA (U.S. Anti-Doping Agency) report, the media, and people like Tyler Hamilton and Floyd Landis have given".

Further reports indicate, that Bruyneel was working on a book to tell his side of the story – titled "We Might As Well Win".