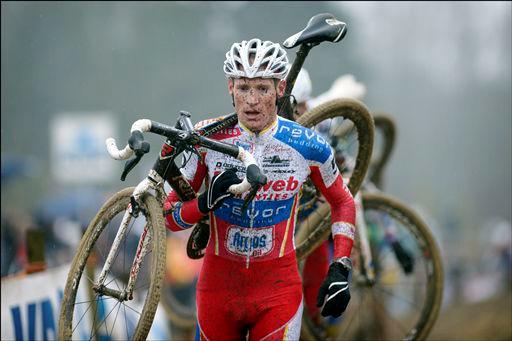 “This was totally unexpected,” said Vantornout. “Before the race, I didn’t even have a lot of energy or motivation to start the race. But in the race I decided to find my own rhythm; I knew that was important. After a while, I started finding my better legs. I realized, the one who is the fittest in the last lap, who has the most energy left, he’ll be the winner.

“I’m not a guy who wins a lot of races, but now I have two Belgian titles. I can’t believe it myself.”

Unfortunately for Aert, his chances of wining today’s race, were shattered after a broken rear derailleur foiled his chances. As a result, the young Belgian hopeful finished 16 seconds behind Vantornout.

“In the beginning of the race everything went like I expected and like I hoped it would,” said van Aert. “I was quickly in the front, and I had a good rhythm. I had a nice advantage, and I was thinking, ‘Okay, let’s do this. Four more laps on my own rhythm.’ And then it would be okay.

“But after I had the mechanical problem — The derailleur wheel in the back was broken, and I couldn’t shift, and I couldn’t put any power to the pedals. So I lost maybe 20 seconds with that. But it was not really the 20 seconds; it was in my head that something went wrong, and the belief in the victory was gone after that.

“For sure it’s disappointing, but it’s only my own fault that I lost the belief in the victory. Because the victory was still in my hands then. I came back easily, and I had the possibility to fight back and go for the victory. I don’t know how it comes that it doesn’t work out. But the belief was gone and for some reason I couldn’t fight in the final.”

At the end of race, Meeusen expressed his displeasure with today’s course, which the Telenet-Fidea rider said didn’t suit his style.

“It’s already two years in a row that I get a really heavy national championships with lots of running and now — it’s always if, if — but if I get a better track, then I have much more chance for the win. Today was just too heavy for me and that I’m not second on such a close distance … Then I would have been ready for the win, I think.

“Before the race I said I wasn’t going to ride for a second place, and now I’m second.”

In the women’s race, Sanne Cant (Enertherm-BKCP) successfully defended her title, after fending off a challenge from Ellen Van Loy (Young Telenet-Fidea).

“When you see the track, it was the hardest ,” Cant said.

“Ellen went on the second lap, but I felt I was a little bit better, and I kept on going on my own tempo. I know when I’m riding that — I was getting closer and closer to Ellen — I’m going faster. And then I was able to ride away from Ellen.”

In the meantime, Van Loy (Telenet-Fidea) claimed second place, 18 seconds behind Cant, while Githa Michiels (Trek-KMC) was third, at almost two minutes back.

“I would have been disappointed with a third place, but I can live with second,” Van Loy said. “It was the chance of a lifetime to beat Sanne, because she had been ill, and it didn’t work.

“I made too many mistakes on the technical part. On the other parts, Sanne got off the bike earlier, but I didn’t gain anything by riding those sections.”

While crossing the finish, Cant pointed to the sky, in what she called a tribute to her grandfather, who recently passed away.

“It’s the first time I’ve won a championship without him,” she said. “In the evening, at the cafe, he was always there . This is the first title I’ve won where he won’t be there.”