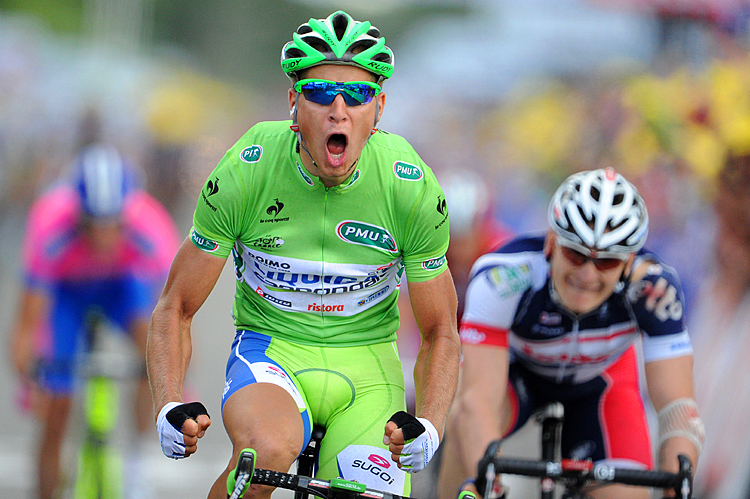 Has a bidding war for Peter Sagan begun ?

Two weeks ago, the Italian newspaper,TuttoBici, reported that Sagan had entered into discussions with the Alonso cycling team; wherein Slovak rider was reportedly offered a huge salary of 3.3 million euros to ride for the new team in 2015.

According to a new report from the Italian newspaper, Oleg Tinkov has reportedly offered an even higher salary of 4 million euros to Sagan if he agrees to sign on with the Tinkoff team.

Reports from the Team Alonso camp, suggest that they are not too thrilled about the latest development in negotiations between Sagan and the Russian billionaire.

It’s clear that Tinkov has had his eye on Sagan for quite some time. Indeed, even before buying the Saxo-Tinkoff team (now Tinkoff – Saxo)l late last year, the Russian was also in negotiations about taking over a share of the Cannondale team, with Sagan allegedly the sole reason for the negotiations.

Many speculate, if Sagan were to leave the Cannondale team after this season, it would likely result in the demise of the US sponsored Italian team, since it’s largely built around the star rider.

However, not all is lost to Tinkov’s money. If Fernando Alonso decides to merger with the existing Cannondale team as previously reported, in addition to securing a team that already has an existing WorldTour license, he may also be able to prompt Cannondale to ante up a portion of Sagan’s salary to match that of Tinkov’s proposal.

​One thing is for certain, whoever doesn’t succeed in securing Sagan, will be left "green with any". Sssss….