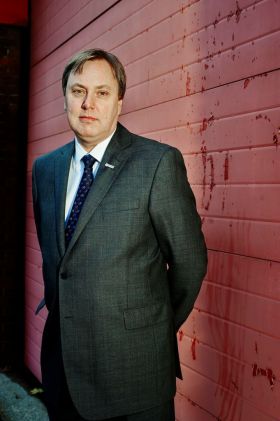 Howden has been a member of the National Governing Body for 43 years and a British Cycling Board member for the past 13.

He has also served as chair of the Yorkshire region since its inception in 2001.

Howden has been serving as acting chairman ever since former President Brian Cookson departed to become the head of the International Cycling Federation (UCI) in September.


The Yorkshireman was the only nomination put forward ahead of the Council Meeting and is confident that he continue the good work achieved, in both an elite and a recreational sense, achieved under the 16 year Cookson tenure.
"I am delighted to have been elected as British Cycling’s President with a mandate to push on with ensuring that British Cycling is achieving its objectives," said Howden.

"We will remain true to what has become our tradition: to succeed on the world stage and to inspire people to enjoy riding their bikes more often, be it for sport, recreation or transport.

"Brian Cookson is a tough act to follow – especially when you look at the amazing roll call of successes that British Cycling has enjoyed under his leadership.

"We are certainly riding high and it’s now my job to ensure that we build on this and I’m looking forward to getting stuck in."

In addition to his other roles, Howden has previously served as chair of the Regional Commission, the Commissaire and Referees Commission, and the Anti-Doping Commission, as well as being a member of both the Audit and Assurance Commission.

He also has significant experience as a race organizer, having founded the Yorkshire Festival of Cycling and organized the National Men’s and Women’s Elite Road Race Championships on three occasions.

Before all of this, he enjoyed a 24-year racing career and was a former junior division road champion who also represented West Yorkshire at senior level.

Away from cycling, Howden is the owner and managing director of a construction related group of companies, including Grass Concrete Limited.

This impressive list of organizational and cycling-related credentials make him the perfect  candidate for the job, claim British Cycling’s chief executive Ian Drake.

"Bob Howden has a long history of working for the sport at all levels – from working as a volunteer and a Commissaire, to leading a Regional Board and sitting on various Commissions – he truly knows cycling inside out," Drake said.

"There is no better person to build on the foundations Brian Cookson has laid for cycling in Great Britain."

In addition to the Presidential vote, National Council representatives also today voted through changes to the make up of British Cycling’s Board.

Instead of having eight solely elected Board members, British Cycling can now elect up to seven members and can appoint three non-executive directors.

The first two such directors will be appointed in April 2014 with a further one to be appointed the following year.