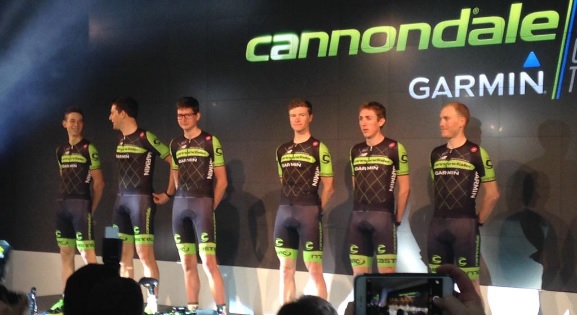 Last night, Cannondale-Garmin Pro Cycling launched the 2015 team at the world-famous IAC building in New York City. Attendees included media, VIPs, bicycle dealers and celebrities. For the first time ever, the event was live-streamed, allowing fans from around the world to join in on the action. Riders Andrew Talansky, Ben King, Dan Martin,Davide Formolo, Joe Dombrowski and Ted King were on hand to represent the 2015 team, along with team CEO Jonathan Vaughters.

"It was an exciting evening," said Jonathan Vaughters, CEO, Team Cannondale-Garmin. "We have an outstanding, young team and as we saw last night, phenomenal partners. The team launch is the start of an exciting season."

Event attendees were given a preview of what’s ahead for the team in 2015, an exclusive first look at the much-anticipated 2015 team kit supplied by technical clothing supplier Castelli, the team’s 2015 bike supplied by title sponsor Cannondale, along with all-new team videos. Anyone who missed out on the action can view highlights from the night at cannondale.com/greenargyle.

"The 2015 Cannondale-Garmin Pro Cycling team has great things ahead of it and this night was just the beginning," said Scott Rittschof, Senior Vice President and General Manager, Cannondale.  "We are fortunate to have such a strong, young team that will take us to new heights and incredible partners that will support them on the way there."

In addition to all of the excitement, attendees were allowed to experience 2015 team technology from partners including Cannondale, Garmin, New Balance, Mavic, Castelli, POC, FSA/Vision, Fizik, Kinnetic and got a first look at the new Cannondale magazine, The Cannondale Gazette.

This incredible technology will be the differentiator for Cannondale-Garmin athletes on the road.  The team will be riding three race-proven bikes this year:

Cannondale SuperSix carbon is the ultimate road-racing machine that will be underneath the riders for the Grand Tours and Ardennes Classics events. At 700 grams, the SuperSix EVO Hi-MOD is the lightest production frame in the world using Cannondale’s proprietary BallisTec carbon and Cannondale’s SPEED SAVE micro-suspension system technology.

Cannondale Synapse Hi-MOD carbon is designed for mixed road surfaces, hours in the saddle with the miles ticking by, nasty weather and early season racing that has a unique rhythm. The ideal blend of compliance, rigidity and weight, the Synapse Hi-MOD carbon is completely re-designed with features like the SAVE PLUS micro-suspension technology, BallisTec Hi-MOD carbon technology, Power Pyramid, providing a stable base of power for unleashing even the most aggressive sprints.

Cannondale Slice RS is designed specifically for speed and will be used exclusively in the team time trial events where going the absolute fastest from point A to point B is the ultimate goal.  Designed with Cannondale NaeroTec technology, radical steerer-less fork, windshadow brakes and a crazy-looking seat post, have all been designed to minimize the surface area presented to the wind.

The 2015 season kicks off at the Tour Down Under in Australia on January 15.