Chris Horner Out of Vuelta a Espana 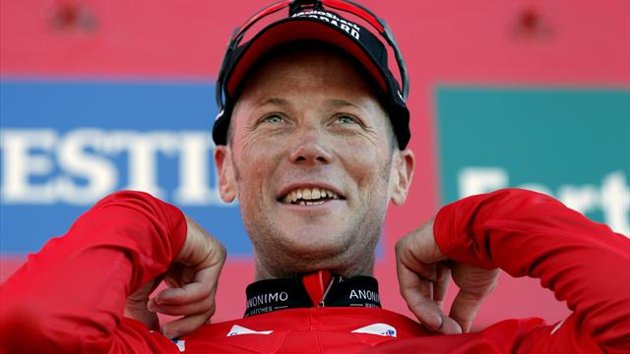 Any hopes of Chris Horner defending his Vuelta titled were dashed today, as the American rider has pulled out of this year’s Grand Tour as a result of low cortisol levels in his blood.

Horner was prescribed cortisone by his team doctor to combat bronchitis, which he’s been suffering since the Tour de France and Tour of Utah. However, since his Lampre-Merida team is part of the MPCC (Mouvement Pour un Cyclisme Credible), despite applying for a TUE (Therapeutic Use Exemption), his levels fell below the MPCC’s standards – leaving him with little option, but to withdraw.

“After the necessary UCI blood tests were taken it showed a lower cortisol level compared to the minimal level requested by the MPCC, thus the decision from the team to not allow the athlete to partake in this Vuelta even with having all the necessary UCI authorisation in order,” a team statement read.

“With this decision, the team reaffirms his adherence to the principles underlying the MPCC organization, agreeing to respect the rules and regulations and not to allow the athlete to start the Vuelta even though this being an important appointment for the athlete after an investment had been made on behalf of the team.”

Ordinarily, UCI rules would have allowed Horner to start the Vuelta a Espana, however, strict adherence to MPCC’s rules, has prevented him from doing so.

“Of course I’m sad about this news. I was willing to try to defend the 2013 title, Vuelta was my main target in the season, the team signed my with the aim of being competitive in the Spanish race, but I accept the decision linked to the MPCC’s rules,” he said.

“This bad bronchitis caused me a lot of problems, I’ve been suffering for it for weeks and this treatment could have allowed me to solve the problem.

“UCI gave authorization for the treatment, I could race according UCI rules, but my team is member of MPCC, I understand it and we all must accept this situation without regrets.”

Cortisol made headlines last June, when it was revealed that Europcar, also an MPCC member, had allowed Pierre Rolland to take part in a stage of the Critérium du Dauphiné (from which he later withdrew) – despite low levels of the medication in his body.

In addition, Theo Bos was removed at the start of last year’s Vuelta a Espana, due to low levels of cortisol in his body. He was later cleared and began racing the following month.