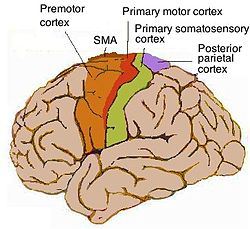 Ahead of the 2015 UCI World Tour, it was revealed that Team Sky was investigating how ‘Transcranial Magnetic Stimulation (TMS)’ could improve performance, presumably through reducing pain perception.

TMS is a non-invasive method used to stimulate small regions of the brain. The basic principle of TMS is that an electrical current is passed through a magnetic coil. This current generates a brief, intense, magnetic field that passes through the scalp and induces an electrical field in the brain. The current results in the depolarize neurons and causes the generation of action potentials (Rosen et al 2009). The use of TMS in the treatment for pain grew out of the surgical implantation of motor cortex stimulation (MCS) and a meta-analysis demonstrated that both approaches can ameliorate pain; however, invasive treatments show significantly greater success. At this point, the use of this technology in brain stimulation is primarily investigational however, it was approved by the FDA for the use in migraines (2013) and treatment-resistant major depressive disorder (2012). Clinical evidence has also shown that the technique may be useful for negative symptoms of schizophrenia and loss of function caused by stroke.

Pain judgements are subjective (if you think they are not, then please have a look at our blog post – Breaking pain barrier through micro goal setting). As Noakes 2012 paper described in its title – Fatigue is a brain-derived emotion that regulates the exercise behaviour to ensure the protection of whole body homeostasis. Goodall et al (2014) described that the application of TMS in sports science could be a valuable technique for exploring these mechanisms of central fatigue and neural adaptation. Single-pulse TMS have already revealed the reduction in motor-evoked potentials (MEP) in muscles after intense exercise (Gruet et al2013) “revealing focal changes in cortical excitability and inhibitability based on electromyographic (EMG) recordings, and a decline in supraspinal “drive” based on force recordings”. Human muscle fatigue does not simply reside in the muscle. (Gandevia 2001).

Assessing the potential for this technique to be applied in sports science today, it is clear there is some years to go. Below is a highlight of some of the research in this space.

– Animal models in space – TMS has been applied to research the effects of microgravity on the cerebral cortex using micogravity animal models and demonstrated changes in neurotransmitter concentrations and neural architecture plasticity. Alterations in corticospinal excitability has also been demonstrated in humans undergoing parabolic (reduced gravity) flight. The identification and proper understanding of cortical plasticity in microgravity and its relationship to astronaut performance is a critical step in preparing for future long-term human space habitation. Additional applications include the rehabilitation of patients suffering from brain injury or prolonged confinement to bed (Roberts et al, 2011).

– Rehabilitation of quadricep activation – when patients undergo a meniscectomy – which is surgical removal of all or some torn meniscus (a meniscus tear is common in the knee joint) – it often results in deficits in quadriceps-activation. It has been found that TMS, in conjunction with maximal contractions, increases quadriceps activation in patients after meniscectomy (Gibbons et al, 2010)

– Pain – The anterior cingulate cortex (ACC) is an area of the brain active in the experience of all types of pain. In 2012, a group from Stanford presented at the Society for Neuroscience the potential of rTMS (repetitive TMS) to treat many kinds of pain. Using magnetic impluses at the ACC of healthy volunteers for 30 minutes, the researchers then placed a hot plate onto their arm and recorded their sensations of pain. Those subjects that had undergone rTMS rated the pain nearly 80% lower than controls, with PET scans revealing blunted activity at the ACC site (Magnetic Brain Stimulation Could Ease Pain, Scientific American 2013)

So to conclude, in theory rTMS could be applied pre-race or even at some point in the future feature in a helmet (although I highly doubt that this form of ‘doping’ – some would claim – would pass) to relieve pain sensation for riders. It could also be used to activate muscles when fatigue sets in. However don’t get too excited about the science quite yet. Its application in sport – both clinically proven and approved by the regulatory bodies – is still quite a few years in the future.