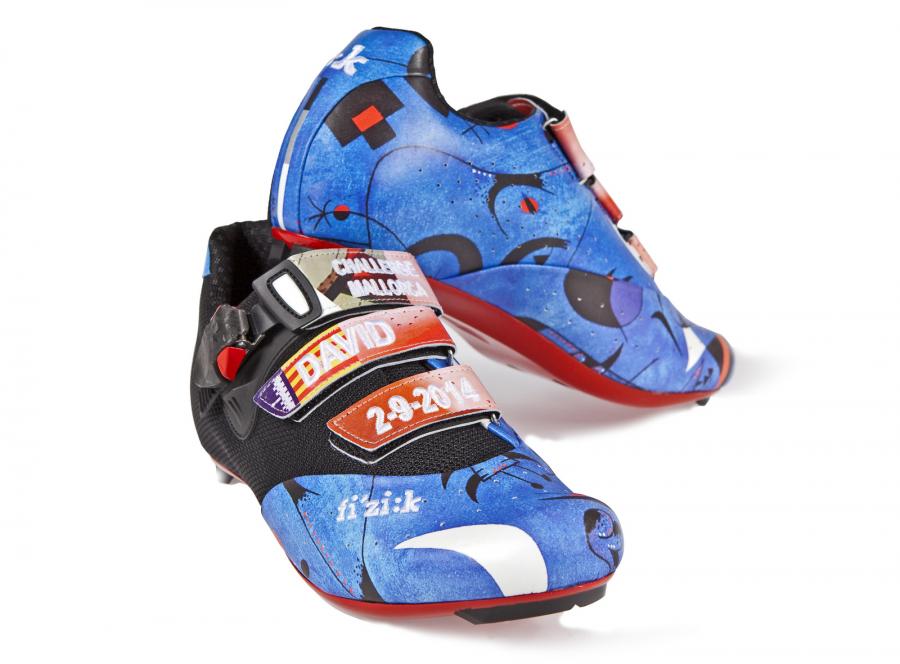 David Millar will celebrate his 18th and final season as a professional cyclist by teaming up with the Small Steps Project charity, to produce a special edition road shoe in collaboration with Fizi:k to be auctioned off at the end of the year.

The project, tilted  ‘An Eloquence Of Movement’, is a partnership between Fizik, Millar and members of his racing club Velo Club Rocacorba.

“I asked fi’zi:k if it would be possible to design and make a different shoe for every race of my final season,” Millar says. “We could auction them off at the end of the year… And like that we created our mad plan.”

Each shoe design, hand made in Italy, is specific to the race and its region to “tell the emotional story of David’s involvement at this race – in 2014 and over the past two decades.” Millar has completed his first race of the season, the Challenge Majorca earlier this month , and wore the shoes pictured in this article.

The other shoe designs will be revealed throughout the season and all the shoes in the series will be sold at an auction in aid of the Small Steps Project at a special end-of-season event. You can keep track of the project at the special website:

The inspiration for most of the shoes we’re designing is the race itself. We are trying to create a narrative in the look of the shoe that captures my vision of the race. Obviously some races are easier than others when it comes to creating this visual.

Mallorca was one of the more tricky ones. The race doesn’t have a clear historical reference and I’ve only done it once before, back in 2007, so my personal history regards it are somewhat scarce and ultimately it has been a training exercise more than anything else, a back to school sort of thing.

On the other hand Mallorca itself I have some connection to. It was here, through a series of relatively random events that I came to know my wife, I actually met her mother first who when she lay eyes on me said randomly, ‘You’re going to marry my daughter.’ Which was a bit weird, but hats off to her, was true.

It’s also the closest I’ll race to my adopted home in Catalonia, so through the help of the VCRC Style Council we came up with an idea that was slightly more abstract, or to be fair, surreal.

One of the greatest artists of the twentieth century was Joan Miró, a Catalan by birth, although his mother’s family was from Mallorca. Eventually Mallorca became his home and where he produced the majority of his most famous work.

We decided to base the first shoe around this theme. It seems appropriate as I’ve always been a bit of an art lover even if I am very uneducated in the matter. Not to mention the fact it’s turned out looking quite amazing, there are few artists whose work could function in this context. I love them, and they’re very representative of Mallorca for me, they also go quite perfectly with my Garmin-Sharp kit, thankfully!

David Millar begins his final year as a professional cyclist on 9 February 2014 at the Vuelta Mallorca. 2014 will draw the curtain on the Scot’s 18-year career, which has included stage wins and leader’s jerseys at all three major Tours and winning the time trial at the 2010 Commonwealth Games.

The Vuelta Mallorca is a series of four one-day races rather than a multi-stage race because rules dictate that riders don’t have to compete every event. Teams can enter squads of 10 riders and rotate their line-up each day.

Day one is the sprinter-friendly Trofeo Palma – a 116km 10-lap criterium around the streets of Palma. Millar’s Garmin-Sharp teammate, Tyler Farrar, won here in 2011.

It should be a tough season opener for Millar, as the 37-year-old will line up alongside 2012 Tour de France winner Bradley Wiggins, Richie Porte (both Sky) and Movistar’s Alejandro Valverde. Predicted temperatures of around 15-18°C should make for a fast and memorable event.

February 9th my season begins, although it is a not a normal start, it’s the beginning of the end: the final season. I’d like to say there are mixed emotions yet there aren’t, I want to enjoy these last races and cherish them for what they are and by doing so appreciate what this sport has given me.

I have the good fortune to have a close relationship with fi’zi:k, I’ve worked with them since 2007. The years of knowing them have led me to trust them and so when they brought out shoes I was one of the first to put my hand up to wear them and commit to developing them. I knew it would be interesting and I had a feeling we’d succeed.

This leads to 2014, I was planning on racing until 2016 and yet last year I made a decision, I realized I wanted to call time to my career and do so on my terms. Hence why I’ve made it very clear this year will be my last.

fi’zi:k being the people they are backed me 100% and said they would help make my last year as special as any before. After the Worlds in Florence I discussed with Nicolo lldos what we could do, he said, ‘Anything.’ I asked if it would be possible to design and make a different shoe for every race of my final season, he looked at me and said, ‘Why not? I’m sure we can do it.’ He paused. ‘We could auction them off at the end of the year to a charity of your choice?’ And like that we created our mad plan.

The plan was given an extra dimension when I brought in the Style Council from my cycling club, Velo Club Rocacorba (Richard Pearce, Max Broby, Kadir Guirey, Douglas Brooks.) Between them and the designers at fi’zi:k we are coming up with designs never before seen, each once completely different from the other and yet managing to maintain the original idea of telling a story, one that reflects my memory/vision of that particular race.

We’re pushing the boundaries of what’s possible in the manufacturing process, each shoe is taking on a life and character of its own. I hope it will bring an added narrative to my final season and ultimately contribute to a wonderful charity, Small Steps Project.

An Eloquence Of Movement is not intended as a chronological record of David’s final season but rather an expression of his whole career – including all the ups and downs – told through a series of designs.

The main inspiration of Mallorca Shoes is Mirò, who painted some of his most important works in his studio in Mallorca.

Mallorca shoes are inspired by one of his collection series, Constellation Philla.