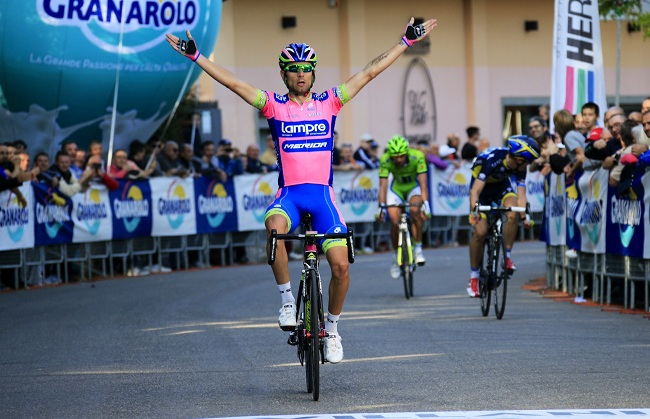 Team Lampre-Merida announced today, that Diego Ulissi returned a positive test for the banned substance salbutamol, which was taken during stage 11 of this year’s Giro d"Italia.

The test revealed, that Ulissi had nearly twice the amount of salbutamol in his urine sample – allowed by regulation. The maximum amount is 1000 ng/ml. However, the test showed that he had 1900 ng/ml in his system.

Ulissi won stages 5 and 8 of the Giro, before abandoning the race after stage 17 – as a result of illness.

According to Lampre’s team doctor, Ulissi used an inhaler that contained salbutamol, along with the prescription medication paracetamol to combat "bronchospasm". Furthermore, Lampre states, that both drugs were declared to officials prior to his drug test.

Lampre issued a statement today, indicating that Ulissi has been provisionally suspended, and he will not be attending Italy’s national team training camp.

“Ulissi strongly rejects the presence of such a large amount of salbutamol and decided to make use of the possibility provided for by the WADA and UCI regulations to undergo a controlled excretion study in relation to the substance salbutamol,” Lampre said.

A sore throat and high temperature allegedly led to Ulissi’s departure from the Giro.