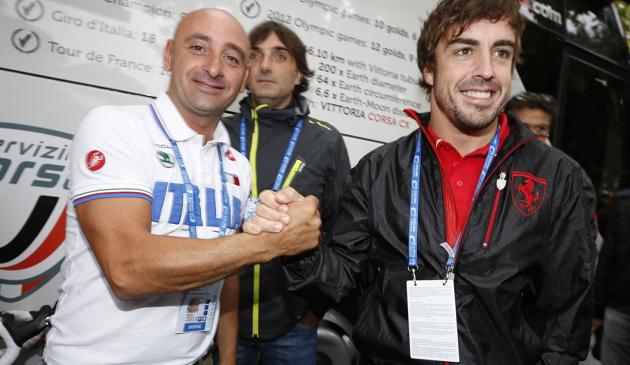 Alonso’s team manager, Paolo Bettini, said in an interview this morning, that everything is coming together as hoped – in time for the team’s 2015 debut.

“We will announce the sponsor shortly,” Bettini told journalists including Cycling Weekly. “It’s only a matter of days. They have to finalize some of the details but before the big classics, you should know everything.”

However, the two-time world champion was tacit with regard to the name and origin of the new sponsor; particularly if the sponsor was  located in Dubai as previously speculated.

Bettini left his position as head coach of Italy’s national cycling team just before the start of the new year, after being personally recruited by Alonso to head up his new cycling project, along with Luis García Abad.

“I don’t have the details, Fernando does. He’s the one who needs to talk, I need to work!” Bettini said. He attended the start of Tirreno-Adriatico stage six this morning in Bucchianico, near Italy’s east coast and Chieti.

“We are working because January 1 is near. It’s not far off,” Bettini added. “We are working on the project, it’s great. I understand it more and more as we go ahead. For the details and information, it’s correct to wait for the right moment and for Fernando to explain them.”

Bettini’s role as of late, has been to recruit as many as 28 to 30 top riders in order to fill the team roster for 2015.  In the course of doing so, there have been widespread rumors that Peter Sagan has allegedly signed on for €3.3m. However, neither party will confirm the deal.

In the meantime, his current Cannondale team said today that it wants to try to keep him onboard for 2015.

“It’s normal that when someone has his contract coming up for renewal that he has offers and takes decisions,” Bettini said. “I don’t think that Sagan has signed with anyone at this point. He’s still free to make his choice. The demand is high but that’s because he deserves it.”

Bettini was seen speaking with several riders this morning at the start of today’s Tirreno-Adriatico stage in Bucchianico, to include Sagan, Tony Martin, Fabian Cancellara and stage two winner – Matteo Pelucchi.

“We are working to have an important team then the results we’ll see at the end of 2015. You can win big races with new riders ,” Bettini said. “I’m working on the team project, we have to create it and go to the UCI commission in November with something concrete.”