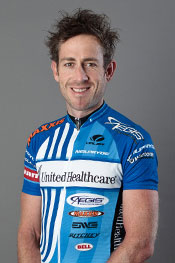 Cycling is a sport in which we rarely focus on technique and efficiency, which seems crazy when you think about it. At a cadence of 90rpm, we pedal 5400 times an hour. On a five-hour ride, that’s 27,000 full pedal revolutions! Increasing your efficiency and reinforcing your muscle memory just a little is going to result in large dividends.

When Day discussed this topic some time ago with the physiologists at the Queensland Academy of Sport, a subsidiary of Australia’s AIS programme, they revealed to him which cycling discipline has the best pedaling technique based on their analysis. Surprisingly, it wasn’t high spinning track riders, but cross-country mountain bikers.

Studies showed that the need to produce torque around the full 360 degrees of the pedal stroke to bike up steep, slippery climbs meant that XC riders had the least amount of negative force on the upstroke. It seems many of us can’t get our leg up and out of the way quickly enough on the back half of the stroke. To look at this in a basic equation, if we’re able to produce a raw 300W on the downstroke, but at the same time we have a negative force of 20W acting against this on the opposite leg’s upstroke, the resultant power output will only be 280W.

There are a number of exercises that the guys at DaybyDay Coaching do themselves – and prescribe to their athletes – to deliver maximum efficiency.

1. Single leg pedalling drills. These are best done on the trainer to be safe. Without shifting your butt on the seat, unclip one foot from the pedal and with the other leg, spend 30-60sec pedalling in a light gear. You’ll see that it’s not easy to maintain positive force on the pedal to keep the cranks turning in a smooth manner. The goal is to be able to pedal with the one leg for this period of time eliminating "chain slap" and keeping things smooth. Repeat three to five times for 30-60sec on each leg.

2. Spin ups. Starting in a light gear on a slight downhill or with a tailwind, gradually increase your cadence so that for the final 15 seconds you are spinning as fast as you possibly can without your butt bouncing on the seat. Repeat three to five times with a 45-60sec interval.

3. Strength endurance. One of my favourite training exercises. Find a climb that has a segment of 8-10 minutes at a 5-6 percent gradient. With your chain in the big ring, ride at your lactate threshold (Z4) with a cadence of 50-60rpm, concentrating on pulling up and over in the second half of each pedal stroke. Do not do this exercise if you suffer from knee problems! Repeat three to four times with an 8-10min interval.

4. Out of the seat pedalling. Efficiency can be increased for out of the seat efforts as well. Standing up gives us the ability to increase torque and power output by utilizing other muscles, although this does result in burning more energy. This can be improved simply through repetition. Whilst out of the seat, concentrate on achieving the perfect rhythm of rocking the bike away from the leg that is down, using your opposing arm to pull up to the leg that is pushing down. Your bike short be rocking underneath you, whilst your body should remain fairly neutral. Repeat up to 3 times with a 5-10min interval.

5. Motor pacing. A favourite training session of the pros, but one in which you need to be careful, skilled and to check your local road laws first. Motor pacing is sitting in the slipstream of a motorcycle or scooter at a high pace and concentrating on pedalling a higher cadence than what you are normally accustomed. I recommend maintaining a cadence of 100-115rpm depending on the terrain. At speeds approaching or surpassing race pace, this session mimics the pedalling microbursts associated with racing and requires good muscle recruitment and firing in order to keep pace.

I am Ben Day – an experienced and seasoned cycling professional since 2002 and a successful cycling coach.  In my time as an elite athlete, I have worked with various coaches from Australia, Germany, Spain, Portugal, England and the USA.  I have also had the privilege to have collaborated and learn from many great physiologists, strength and conditioning trainers, sports medicine doctors, sport psychologists and career advisors with the Queensland Academy of Sport and the Australian Institute of Sport, an internationally renowned sporting revolution, facilitating Australia’s great successes in cycling in the past 20 years.

My experience racing and training across the globe has equipped me beyond most coaches as I am not only current with ideas and methodologies, I am also understanding of what makes a cyclist good in this modern world of cycling. I have had some incredibly knowledgeable people all in my corner throughout this time, teaching me many things that contribute to making an athlete the best possible athlete he or she can be.

Already during my professional cycling career, I have had some incredible moments such as representing my country at World Championships and Commonwealth Games level with success, which has enabled me to learn about what makes a cyclist perform to the best of their abilities.

I am able to draw upon all of these experiences and knowledge in my coaching to make a better cyclist – day by day.  Based in Boulder, Colorado, USA, I work with athletes throughout the US, Europe, Australia and the World