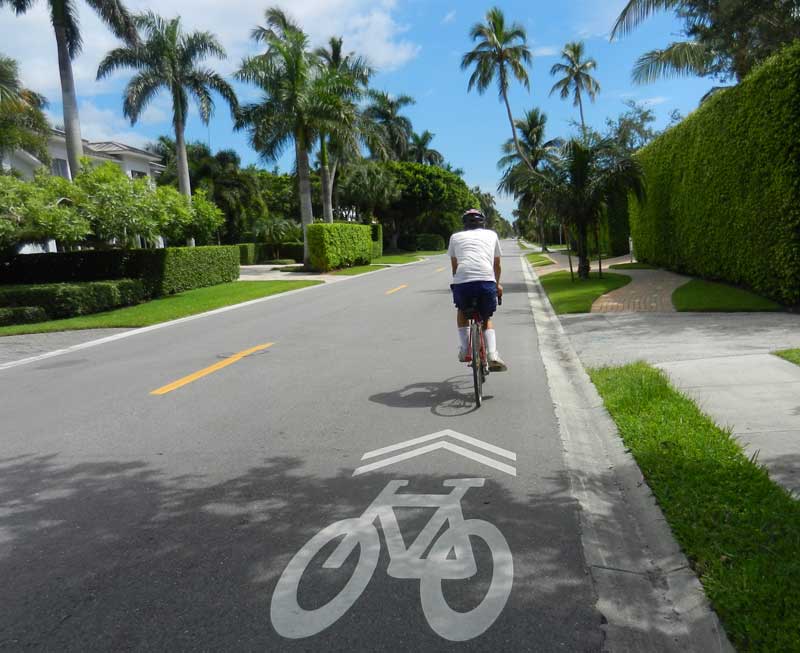 According to the Florida Department of Transportation, in the not too distant future, bicyclists will be able to travel the length of the state via the establishment of a long-distance bike route.

Indeed, to make sure bicyclists can make their way across the entire state of Florida, the FDOT has embarked on establishing a bike route following the outline of U.S. 1 that runs from Jacksonville to Key West.

For 541 miles, cyclists would be able to meander through scenic and cultural aspects of the corridor, taking in parts of West Palm Beach, Delray Beach, Fort Lauderdale and Miami.

The route will be part of theUnited States Bicycle Route System – a national network of connected bike routes similar to the interstate highway system.

US BR 1 is one of four routes FDOT plans to establish that eventually will connect to future routes in Georgia and Alabama. Another route, US BR 90 also is currently in the works and would stretch from Pensacola to St. Augustine following U.S. 90.

U.S. bike routes, or at least the concept of them, have been around since 1979, with the first U.S bike routes created in 1982 — US BR 1 in Virginia and North Carolina and US BR 76 in Virginia, Kentucky and Illinois.

But after that, the idea stagnated. No other national bike routes were created for nearly 30 years.

"We were all busy building roads and highways," said David Lee, a FDOT administrator overseeing the U.S. bike route system in Florida. "Usually when you ride a bike, you don’t think about traveling across a state."

But the last few years has seen a resurgence in the U.S bike route system. That came after state transportation officials and bike advocates created an interstate bicycle map, outlining a vision of where routes could go.

That’s how the U.S. highway and interstate systems started — with maps, Lee pointed out. Now, nine states have U.S. bike routes, and about 40 states are in the process of implementing them.

The U.S. 1 bike route likely will be a mix of low-traffic roads and some busy urban sections. U.S. 1 mainly acts as a baseline for the proposed route, which will diverge from the road to county- or city-maintained streets and trails that can better accommodate cyclists.

So parts of State Road A1A could be part of the route. So could the East Coast Greenway, a mainly off-road system of trails stretching from Maine to Key West.

U.S. bike routes must be approved by the American Association of State Highway and Transportation Officials, which also designates U.S. highways and interstates.

The criteria FDOT established for its routes also requires them to be close to major attractions, destinations and public transportation. And every 40 to 60 miles on the route should have services and amenities such as places to get food, camping or hotels.

FDOT will have to work with local governments and groups to not only figure out the best route but also to make sure they’re fine with a U.S. bike route system running through their communities.

"Anything that results in roads being upgraded to better accommodate bikes, I’m all for it," he said.

Communities should embrace the U.S. bike routes since they will attract a growing group of cyclists embracing bike tourism, said Virginia Sullivan, with Adventure Cycling Association – an advocacy group helping to establish the bike routes.

"They bring people and money to the local communities," she said.

She compared them to interstate highways like Interstate 95. The highways are used by both commuters and long-distance travelers. The U.S. bike routes also would be used by local residents for short trips or out-of-town cyclists on a long distance trip.

But a big difference is the cyclists would stick around longer, taking a couple of days to get through a county, and pour money into the local economy, Sullivan said.