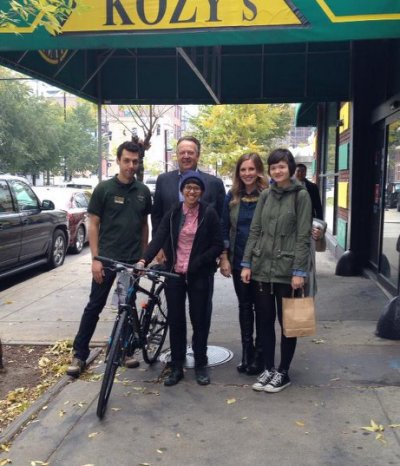 When someone stole 19-year-old Olgi Freyre’s beloved bicycle, she didn’t just get upset, she publicly posted an angry note to the thief, hoping he would see it. Luckily, a Good Samaritan read it — and bought her a new bike.

On Monday, Freyre, an artist and student based in Chicago, chained her $700 red KHS bicycle to a rack before her 10 a.m. shift at Lake View Art Supply store. “I parked it right in front of a big glass window so I could keep an eye on it,” Freyre said. “I happened to glance out the window on my lunch break, saw it was missing, and my heart sank.”

Freyre ran outside, distraught, and out of frustration, she began angrily kicking the rack. “I filed a police report, but I still was upset because I worked so hard to buy that bike, so that day, I wrote a note to the thief and posted it to a lamppost,” she says. “I didn’t think the thief would see it, but it felt good to vent.”

The note, in part, read, “Do you know how hard I worked to buy that bike? Actually, you stole it while I was at work. I’m 19 and paid for that completely out of my own pocket. I work 40 hours a week. I go to school part-time. That bike was my only mode of transportation … so I don’t care who you are or where you’re from but you just stole something from a person who dedicates her time to making her life better.”

That day, a passerby snapped a photo of the note and tweeted it. By the time Freyre woke up on Tuesday morning, she had dozens of phone calls from local news reporters, inquiring about her bike. A news story aired that night and caught the attention of Chicago resident Robert Curry, 59, a senior vice president at Morgan Stanley.

“I was watching television and eating a sandwich when I saw a news segment about a girl whose bike was stolen,” Curry said. “My heart immediately went out to her because when I was in college, my roommate left the window in our apartment open and a thief stole $80 and my bike. I knew exactly how she felt and I wanted to help.”

Curry emailed the news station, hoping someone could connect the two of them, and then called Freyre and asked if she could meet him at Kozy’s Cyclery, a local bike shop, and to bring along a friend.

“After talking to Bob on the phone, he put me at ease, and I could tell he really wanted to help,” says Freyre. On Wednesday, she and a girlfriend met Bob and his daughter Jessica, a digital sales rep at Glam Media, and Curry told her to select any bike she wanted. Freyre picked a black-and-white hybrid bicycle, and Curry picked up the tab. Afterward, he treated the three young women to a sushi lunch at Union Sushi + Barbeque Bar.

“I was so blown away by Bob’s kindness and I don’t know how to thank him,” says Freyre, who offered to create a drawing for the Curry family. She’s also become fast friends with Jessica, and to further pay it forward, the two may team up to launch a fundraiser with the proceeds going toward children who need bicycles.

Curry wants nothing in return for his gesture, but there’s one caveat: “I told Olgi that she could have the bike on the condition that before her 59th birthday, she must buy a bike for someone in her shoes,” he says. “She has 40 years to fulfill that promise.”