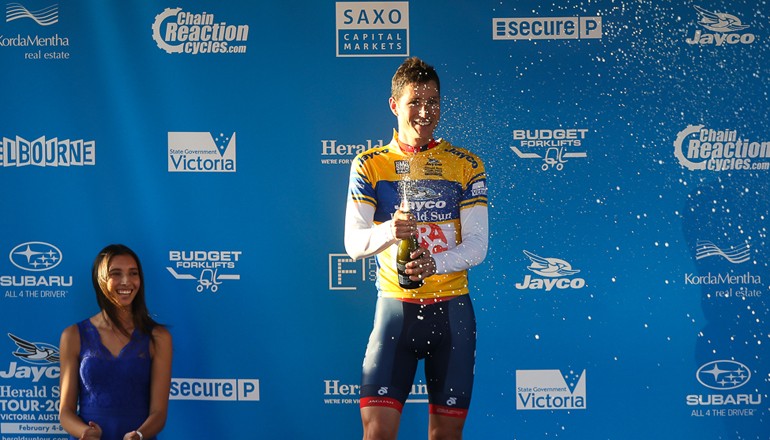 Will Clarke (Drapac) powered to victory in the Prologue to become the first man to wear the yellow leader’s jersey of the 2015 Jayco Herald Sun Tour, blitzing the 2.1km course in front of an estimated crowd of more than 20,000 in Melbourne.

Clarke, from Tasmania, was third in the prologue in 2014 and it was a result that burned.

“I’ve been thinking about it for 12 months so I’ve had a bit of time to go over it and figure out where to make up a bit of ground,” he said following his win.

The 29-year-old used his raw power to set a winning time of 2:35.53, with ORICA-GreenEdge sprint sensation Caleb Ewan less than a second in arrears (2:36.42). Rounding out a solid day for the Melbourne-based Drapac squad, Brenton Jones was third in a time of 2:36.85.

“I always knew it was about just driving it as hard as you can for the whole time,” explained Clarke.

Ewan, despite a trademark deft touch on the corners on the first half of the course, had an outstanding last kilometre. He will wear the State Government Victoria white jersey as the best under 23 rider on Thursday’s first stage beginning in Mt Macedon.

“Coming into that last one-and-a-half kilometres, there’s a few little corners but nothing too serious,” he said. “They’re not corners that you lose too much time on. With a course like that it suits a really powerful guy like Will so he was always going to be hard to beat.”

Likely to be one of Ewan’s rivals this week on the sprint stages, Jones was pleased with his prologue form.

“Explosive acceleration out of the corners helps a lot,” he explained. “But when you see the finish line, as a sprinter, you have white line fever. You look at the finish line and you give it everything until you cross it.”

Defending champion, Simon Clarke (ORICA-GreenEdge) crossed the finish line in a time of 2:37.33, in seventh place. Keen to get an early jump on his rivals for a second Sun Tour victory, Clarke was pleased with his ride.

“It went well,” the Vuelta a Espana stage winner said. “I was hoping for a little bit better but at least I didn’t get any worse.

“My goal was to finish ahead of the GC guys and put as much time into them as I could. As far as I could see, the only real threat was Will Clarke who obviously won today and had a super ride.”

His Drapac namesake dismissed his chances of holding on to the yellow jersey when the race reaches its conclusion on Sunday after three ascents of Arthurs Seat, but suggested his teammates could be in with a chance.

“I’m probably not a GC rider for Drapac but we’ve got some strong climbers and BJ for the sprints so hopefully I can help him out there in the sprint stages and maybe even look for a breakaway for myself,” he said.

Simon Clarke has 548km to work on that advantage.

Action aplenty from in the Prologue

Robert Power (Jayco-AIS Australian U23 National Team) was the first rider to leave the start house in Federation Square. The runner-up in last year’s Tour de l’Avenir setting the pace for the rest of the field, crossing the finish line in a time of 2:47.38. That time was quickly overtaken, with the second rider to get underway, Chris Lawless (Great Britain National Team) staking a claim for the hot seat with his time of 2:42.32.

Australian Damien Howson (ORICA-GreenEDGE) demonstrated his strength against the clock, the former Under23 World Champion in the time trial next to set the benchmark time, motoring home in 2:41.28.

Reigning National Road Series champion and current New Zealand Road Champion, Joe Cooper (Avanti) brought that time down again, crossing the line in 2:38.64.  Soon after, another Kiwi in ORICA-GreenEDGE’s Sam Bewley monstered the course to move into the hot seat with his time of 2:37.19.

Seventh at the halfway mark, Brenton Jones (Drapac) came into his element on the straight back end of the course, powering to the finish, hitting a top speed of 66km/h and setting the new best time of 2:36.85.

Caleb Ewan, fifth best at the halfway mark time check, the ORICA-GreenEDGE sprinter became the third man from his team to occupy the hot seat, relishing the finishing straight to edge Jones’ time with a 2:36.42.

Third in the 2014 prologue by just two seconds, Will Clarke (Drapac) took charge of his machine to speed through the circuit averaging 48.8km/h and with only four riders to follow, wasn’t challenged, stepping straight from the hot seat to the top of the podium. Clarke heads to stage one as both leader of the race and also the Chain Reaction Cycles Sprinters classification.