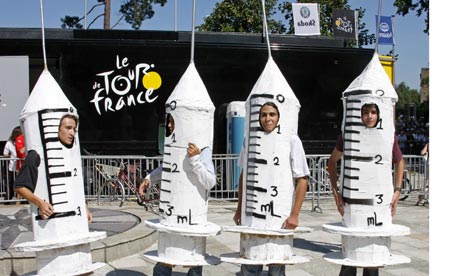 One of Spain’s leading cancer specialists, Dr Cristóbal Belda-Iniesta, how a new method of  cancer treatment can be used to help detect doping by athletes.

Speaking at a conference entitled "Looking for new elements for the detection of doping within sport", at the headquarters of the Spanish Olympic Committee in Madrid, Dr. Belda explained how:

"there are substances that degrade in hours and can therefore be practically undetectable, but which leave a footprint in genetic memory that can be detected five years later".

Dr. Belda, is currently overseeing a project studying new ways to detect evidence of doping. Next month, new International Olympic Committee president Thomas Bach will head to Madrid for a presentation on his research.,

Dr. Belda and his research team have built up significant knowledge of how a variety of products that are used as part of cancer treatments, including EPO, growth hormone and IGF-1, can change the make-up of cells.

"All these substances are very well known to cells, and therefore to me," said Belda, who came to prominence in Spain as oncologist to the late golfing great Severiano Ballesteros.

"Indeed, tumour cells feed off EPO and because of that they develop specific receptors. For that reason, we know all about EPO and we are learning how to fight that as part of the battle against cancer," El País reported Dr. Belda as saying. He added that even a tiny drop of EPO can boost the size of a tumor cell culture by "1,800 in just five days when normally, without EPO, it would double in size at most over the same period."

Dr. Belda also outlined the dangers of some these products as it relates to long-term use.

"I have said experimentally because there are no epidemiological studies to back this up. But the scientific basis for this is simple: each cell has needed millions of years to evolve and reach a perfect state. When we modify it in an accelerated way with one of these substances we modify all of them, because they are all connected. For this reason, I want to fight against doping because it is a health issue."