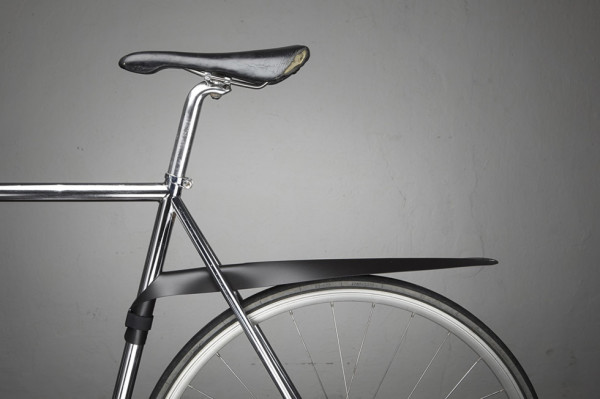 Amongst the seemingly endless jungle of senseless, extraneous "stuff’ that every wannabe inventor and entrepreneur is touting on Kickstarter these days, every now and then there’s a cool little gadget or piece of technology that does right by the bicycle world.

As simple as it is, the Musguard brings something meaningful to the urban cyclist and daily commuter. Dig !

Judging by the video, even Tom Wolfe might be willing to suspend a little "vanity" and give one a try.  😉

Musguard is a brainchild of me, Jurij Lozić. I am a product design graduate from Ljubljana, Slovenia (EU). Since I have a lot of interests, my work varies from illustration, mural painting, product and interior design to public and gallery art installations.

The idea for Musguard came about 5 years ago in Milan, Italy, where I studied for a year and also made my first fixed gear bike. I was looking for a simple, removable fender but when I couldn’t find it, i decided to make one myself. I was familiar with strong, resilient polypropylene sheets, so I made the first prototype, a one-off laser cut piece. Because of positive feedback from people who saw it, I decide to continue to perfect it.

The concept behind Musguard is quite simple: I wanted a fender that would protect my back, would be removable, would pack small and most important: would suit the sleek, streamlined, light, clean, simple, minimal aesthetic of fixed gear bikes. Like a feather or a leaf.

In the process of development I took all of the above aspects and worked on them one by one. Structural stability and ease of use, sleek shape and efficient protection, cool look and good function at an affordable price. What I regard as true values of design.

I use the word "We" throughout this campaign, because even with me being the driving force behind this project, I would never be able to do it without help of my overly talented friends.