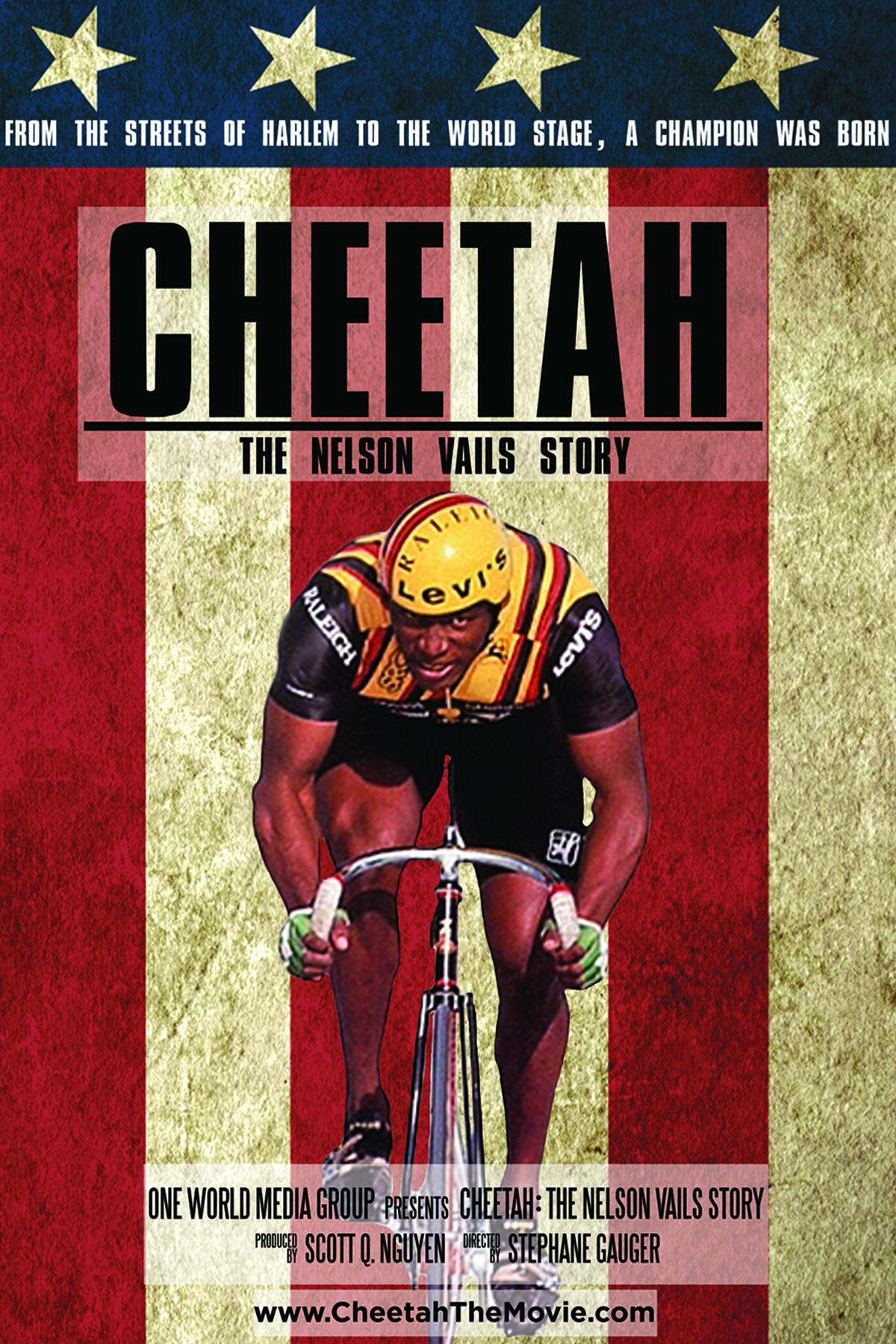 A documentary about Nelson Vails, the first African-American to ever win a medal at the Olympics in track cycling debuted last  Saturday to a sold-out audience.

The film, “Cheetah” which documents the rise of Vails from his Harlem, NY, hometown to track racing fame at the 1984 Olympics was attended by New York City cyclists, friends and family.

It was the first showing of the film directed by Stephane Gauger, and produced by Scott Nguyen, and was held at Harlem Mist, on East 115th Street in Harlem–appropriately in Vails’ childhood neighborhood.

What many in the audience missed was an early morning talk the same day by Vails at the Youth Bicycle Summit being held at the New School on 12th Street, which might have made them wonder why that portion of his talk wasn’t included in the film.

In addition to being an extremely talented cyclist who rose to stardom after winning the 1984 silver medal for America in the 100-meter match sprint, Vails is a wickedly funny presenter who had kids from the Youth Summit chomping at the bit to be just like him.

What Vails covered in his morning was the many years he spent traveling from one European country to another to race in professional track events, and earning as much as $1,000 a day.

In one scene shown at the Youth Summit, as he handily wins a Keirin in Japan, he says to the audience, “This is how you get paid,” to great laughter.

The footage then shows Vails going to collect his money and flipping through the bills, smiling and joking. “That’s bringing home the bacon the best way I can,” he commented, drawing delighted laughter from the crowd.

Unfortunately this footage and Vail’s super easy presence are not fully portrayed in this film: He was not just a poor Black kid from Harlem who won the Olympics and became famous–he was a successful bike racer who earned a living doing it, something many white bike racers fail to do over their careers.

We also never learn from the documentary certain facts, such as how Vails learned to speak multiple European languages because he just had to.

But the film does take the audience through the remarkable ark of Vail’s life, from his childhood where he was the youngest and most “spoiled” of 11 children growing up in East Harlem as seen through the eyes and the telling of his older sister Earlise, his neighborhood friends, his ex-wife Sharon, and other friends and relatives.  ”They had basketballs everywhere you looked–he just wanted to be different,” recounted a friend.

Mrs. Florence, a neighbor of the family when Vails was growing up said his mother named him Nelson “after Nelson Rockefeller so he’d be rich. I don’t think he’s rich yet,” she says.

Many characters shown in the film attended the premiere, along with childhood friends and family, members of Vails’ childhood church who sang inspired hymns before the film started, as well as many in the cycling community who have long admired  the many times national track champion and gold medal winner in the 1983 PanAmerican Games.

The collective presence of so many who knew Vails well led to guffaws of laughter when his sister called him “spoiled,” screams of “awww,” when his baby pictures flashed by, and cheers when Vails won a race . This was a showing I am glad I did not miss because it was in a word, thrilling.

I wasn’t sure the filmmakers would touch on the events that led up to Vails making it to the Olympics in 1984, but they did. The Soviet Bloc boycotted the games held in Los Angeles, CA that year, leaving room for one additional cyclist from each country to attend. That meant Vails was chosen, along with the favorite Mark Gorski.

The film also includes commentary from Gorski whose recounting of that eventful year is interspersed with Vails’ account. In the final match sprint, the two Americans are forced to race against one another. Gorski wins the sprint, capturing the gold medal, and Vails gets the silver.

Says Vails, “Mark out-pedaled me that day,” but to the viewer it almost seems like he let his friend win.  ”I think the great victory for me was my dad seeing me win,” added Vails.

After securing the silver and returning to New York, Vails is heralded a hero in a ticker-tape parade through the streets of Manhattan and he basks in the glory.  His ensuing success in the international circuit–which is mostly referred to–played a part in the unraveling of his marriage with Sharon Vails, who is shown first as an innocent young lady who wears almost no make-up in wedding footage, and as she is now, transformed with large sunglasses and masses of hair.

The film also introduces his daughters Shanique and Imami Vails, both young adults now, beautiful and looking a lot like their dad. Though Vails’ absence through their childhood is touched on, it’s never explored, and that deficit is a detriment to the story.

But Vails’ relationship with his 10 other siblings was clearly a warm one. In a scene held at the family’s local Baptist church, Vails’ sister Earlise is celebrating her two brothers, the eldest Robert, and the youngest, Nelson. As she tells the Baptist congregation about Robert, who was part of the all black Rangers, the second ranger infantry company in the Korean War from 1950 to 1951, and who met with “our President, Barack Obama,” the camera captures Robert’s face struggling with range of emotions, from love, to pain, to tears as he listens to his sister.

Then it’s Nelson’s turn: Earlise who was a pivotal figure in raising Vails says, “He gave me a hard time, he was always in my stuff.” She continued, “But I am so proud of my baby brother, Nelson Vails,” and the camera cuts to him in the audience, tears marking his face.

Corny perhaps to some, but one of the best moments of this touching film which brings to full comprehension not only the importance of what Vails has accomplished in the world of cycling, but how important it was and still is to his family and community.

The film ends with more footage of Vails returning to the streets of New York, where he was born and where he lived before becoming the famous bike racer. His face shows touches of sadness, perhaps from the long years searching to find a new path after the heyday years of racing has ended. Or maybe just because the footage is shot in the failing blue light of the day that always makes New York a little sad.

But anyone who knows cycling knows that this sport will chew you up and spit you out once you’ve stopped racing. But we also know it’s the journey that counts.

The movie comes at a good time, when the Olympics are top of mind for many people.  But what so many of the audience who have never been professional athletes fail to comprehend is that at some point, the athlete has to become someone else, and that transition is always hard. This movie may be one of the answers for Vails, whose story is one of the best this country will ever retell.

After its New York premiere, Cheetah can be seen in Los Angeles and San Diego, and many American cities over the coming days and weeks. For the full schedule, check his site, NelsonVails.com.