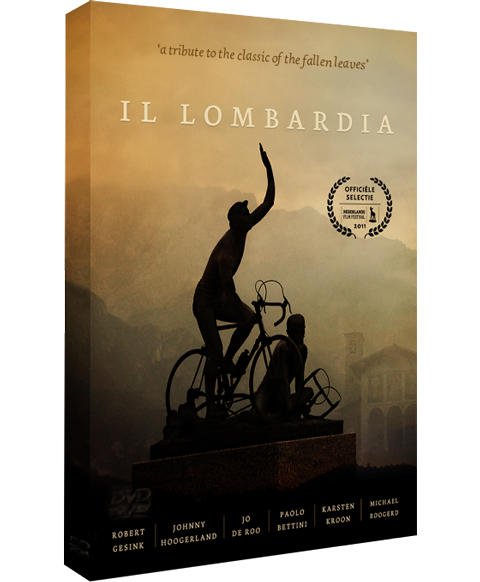 When the heavy scent of autumn starts filling the air, the falling leaves and inevitable showers announce one the toughest cycling classics. With its winding roads and steep slopes of 14% maximum, the Giro di Lombardia also known as the ‘Classic of the falling leaves’ is pro cycling season’s grand finale.

The century-old race in the Italian hills surrounding Lake Como has been won by Italian cycling heroes Coppi, Bartali and Moser. And also legends like Merckx, Hinault and Kelly made it to the podium. The 1962 edition is by far the toughest in the history of the race and was won by Dutchman Jo de Roo. Still every year Dutch pro cyclists participate to be a part of this great cycling tradition and in the end to gain victory.

Just with one simple camera Dutch director Johannes Sigmond and producer Robert Jan van Noort visited the race from 2006 to 2010 in an effort to capture the soul of this legendary Italian bike race. They filmed and talked to Dutch participants, visited the famous climbs and tasted the atmosphere among Italian cycling fans enjoying their monumental meals and espresso while waiting for hours on the side to catch a glimpse of the riders.

Apart from being a favorite for the general classification, Gesink is also an excellent climber. As well in short, steep climbs in the classics as in the high mountain stages. In 2010 Gesink was favorite to win the Giro di Lombardia, but due to a family tragedy he did not start.

Remarkable: Robert Gesink did several recons of the Muro di Sormano in 2009, more than a year before the climb returned in the course of Lombardia after 50 years (2011).

About Lombardia: “It comes at the end of the season, so many riders are tired and have done so much racing that they’re at the end of their tether. The men who still have morale can do well in the Tour of Lombardy.”