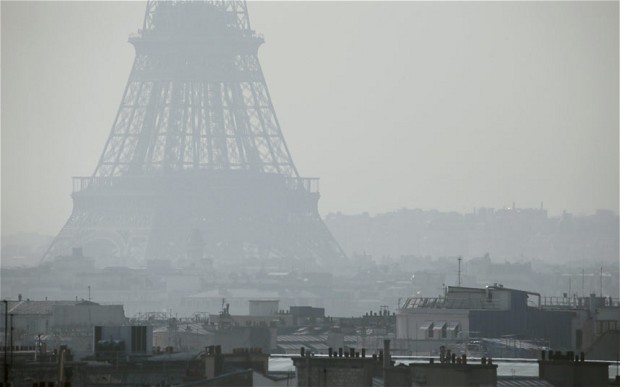 On Friday city authorities responded to several days of severe air pollution by announcing that public transport across the city would be free. But with still weather set to continue for several more days and smog levels exceeding safe limits, officials announced yesterday only motorists with odd-numbered registration plates will be able to drive in the city today. If restrictions remain in place tomorrow the ban will switch so that only even-numbered plates can use the city’s roads.

Police have been instructed to enforce the ban and anyone flouting the rules will risk facing a €22 fine.

The city previously imposed a car ban in 1997 with authorities insisting the move did reduce air pollution. However, the latest move prompted widespread complaints from some residents and business groups, while opposition leader Jean-Francois Cope said the policy "lacks coherence, explanation and on the ground it’s really panic".

The move came as much of western Europe faced dangerous levels of pollution as high pressure brought unseasonably warm weather and smog to the region’s main cities. According to the European Environment Agency (EEA), Belgium, Germany, and France all faced dangerous levels of air pollution with three quarters of France recording PM10 concentrations above the 50 micrograms per cubic meter legal limit.

The EEA also reported last week that ground level ozone levels exceeded legal limits in ever member state during the summer of 2013. The agency’s report found that in some countries up to two fifths of the population was exposed to levels exceeding limits.

The decision by the Paris authorities to take drastic action to tackle air pollution could increase pressure on London Mayor Boris Johnson to similarly step up efforts to tackle dangerous levels of smog.

The UK is currently facing legal action from the4 EU over its repeated failure to put forward sufficiently ambitious proposals to tackle dangerous levels of air pollution in a number of cities and Johnson has faced repeated calls to tackle pollution in the capital.