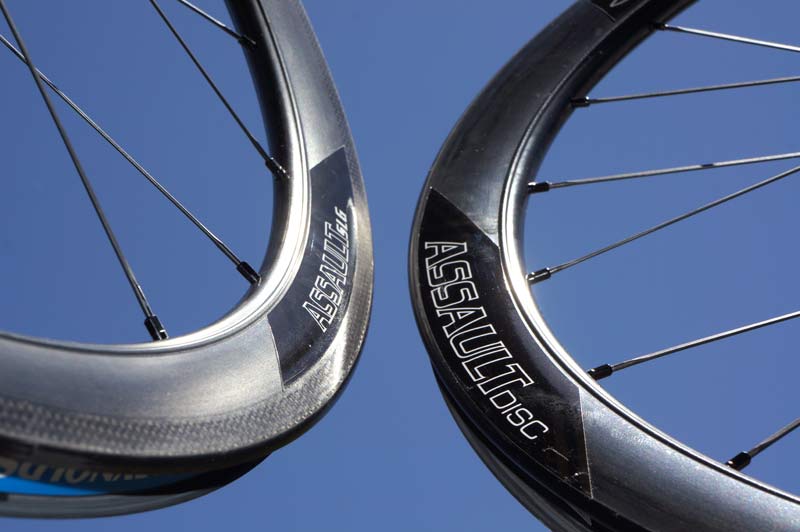 According to Reynolds, in addition to furthering the Assault’s aerodynamic properties by widening the rim profile to 24.5mm, they were also able to reduce weight as well.  And, while many companies have been moving toward "flatter" rim profiles, Reynolds has been sticking with their fine-tipped designs. The difference, says Reynolds’ veteran aerodynamic designer Paul Lew, between a high-drag/high-lift design for blunt-nosed rims versus a low-drag/low-lift design for the Aero pointed-edge rims is:

“We’ve all seen those charts with drag illustrated at various yaw angles,” Lew said. “A lot of times with wheels, where the drag drops, what we’re really saying is the lift-over-drag ratio is improving. When you turn the wheel into the wind, you can feel the increased pressure — the increased drag — but there is also lift. The greater the side force, the greater the thrust; think about a sailboat. Our Aero design is a low-lift design. If it were a sailboat, it wouldn’t lean over as far as say the Firecrest, which has the highest lift. For bikes, the new Felt tri bike is an example of a high lift/high drag frame. A low lift/low drag bike is a Cervélo.”

“We went with low/low because most days you don’t have 20-25mph winds,” he said.

Aside from performance, Reynolds’ marketing manager Rob Aguero indicated that the objective is to give customers excellent overall performance at a great price.

“They have always been value-packed wheels, but we wanted to go down the checklist as to what we were being asked for from distributors and customers: wide rims, weight targets, external nipples, and of course a price under $2,000,” Aguero said.