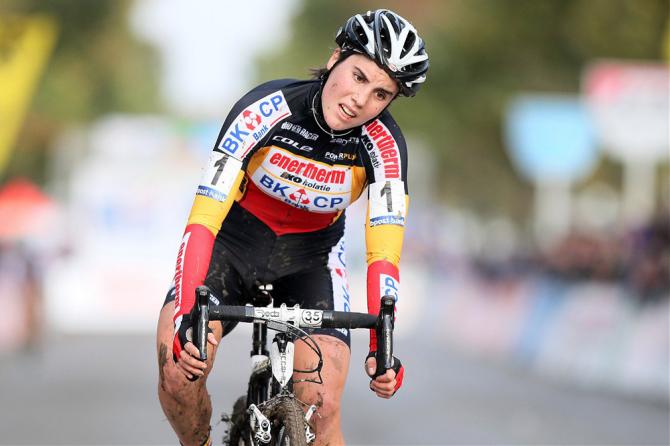 After winning no fewer than 19 races, to include the Belgian and European championships, two World Cup rounds and the overall tittle in this year’s World Cup series, Sanne Cant is unhappy with her second place finish at last weekend’s World Championships.

The Belgian rider attributes her loss to Pauline Ferrand-Prevot to fatigue, as a result of racing a full cyclocross calendar, as opposed to her rivals – which she calls "part-timers".

Indeed, visibly disappointed during the awards ceremony, Cant later lashed out, saying she felt Ferrand-Prévot’s limited cyclocross season allowed her to be more "fresh" at the World Championships.

“I ride a full cyclocross season and have many more races in my legs than those other women. They are more fresh than me. It’s frustrating to lose the world title in the sprint from someone who rides fewer cyclocross races than I do. I recognize the qualities of Nash, Vos and Ferrand-Prévot but Pauline and Marianne start their ‘cross campaign in December and focus on the World Championships. I can’t afford to skip ten races to be fresh for the World Championships. I have to be up there all season long. Then it’s hard to fight up against women who race half the season. That’s easier than performing all season long. That’s a bit of a blow now,” says Cant.

“I knew she would be hard to beat in the sprint, that she won the road world championships in the sprint, but at some point you’re hoping for more,” Cant said. “I was focusing on Vos and Nash for too long but when I realized they weren’t having their best day I closed the gap to Ferrand-Prévot. On the climb after the barriers I felt really strong.”Cant compared the campaign of Ferrand-Prevot to the one of Zdenek Stybar in the Elite Men’s category.

“I don’t think the men were happy to see a fresh Zdenek Stybar racing along only one race each season,” Cant said.

Despite her loss at the Worlds, Cant takes solace in the fact, that she can look back on her season and realize her accomplishments, and the possibility of winning the world title in the future.

“I’ve got a good season behind me. I won the World Cup, the Belgian and European championships and end the cyclocross season as the world’s number one. So, from the non-occasional riders I was probably the best. But for now, that’s not much of a consolation for me. I hope that during the next few years I can rise to the level that allows me to win the World Championships after a full cyclocross season. There will be more chances but this was a missed one.”