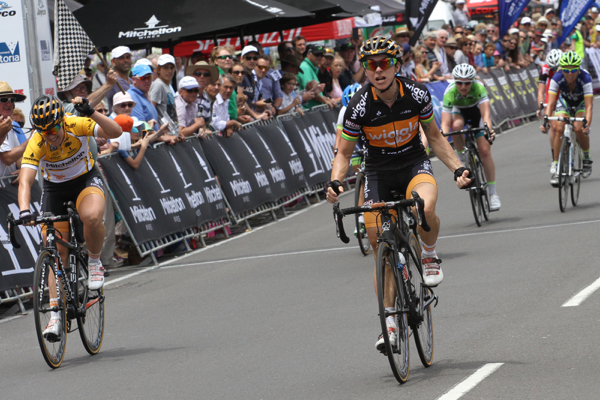 However, despite finishing third, Scandolara managed to hold onto the overall race lead with one final criterium in Victoria Park tomorrow.

Bronzini emerged as the only Wiggle-Honda rider in the lead group of 11 riders, who managed to chase down the escapees during the final 35 kilometers.

At one point, Scandolara and Ruth Corset commenced an attack on the Checkers Hill section of the course. However, the two leaders were quickly joined by Bronzini and 8 other riders.

While strategically nestled in the lead group, Bronzini kept quiet before launching a final acceleration that successfully jettisoned her rivals just before the finish.

“There were four Greenedge (Orica-AIS) riders so it was stupid if I rolled in front, so I waited and sat back while some of the girls attacked. It was pretty simple about the tactic, but not simple about the riding,” Bronzini explained.

Meanwhile, Scandolara remains 6 seconds ahead of her teammate Hoskins going into the final stage.