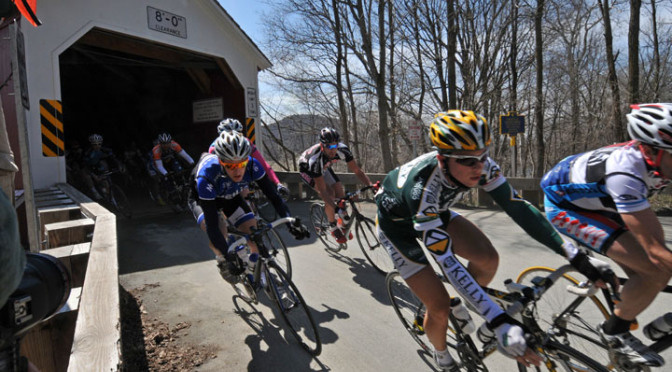 Organizers of the 2015 Tour of the Battenkill announce changes to their 11th annual cycling event.  After 4 years in the Village of Salem and 6 years in the Village of Cambridge, the event will move to Middle Falls and the Washington County Fairgrounds.  The event also moves to the final weekend in April to allow for better weather and to avoid the Palm Sunday and Easter Holidays in the future.  Set for April 25-26, 2015 the event enters its second decade as the largest Pro/Am cycling race in North America.  2000 racers from more than 40 states and 15 countries participated in 2014.

”While we enjoyed great venues in both Salem and Cambridge, we are extremely happy to be moving to the Fairgrounds for next year and beyond,” said event race Director Dieter Drake. “The Washington County Fair is an important part of the area each August, and we hope to help to build their audience and at the same time provide a better venue for our event.”

The Washington County Fairgrounds will also allow the event to grow.

“The fairgrounds are set up almost perfectly for us with parking, better proximity to Saratoga hotel space, exciting start and finish areas, and the infrastructure to allow the event to continue to grow. Our expo areas & parking space are very important for our sponsors and participants and for the overall flow of the event.  The fairgrounds has all this in one place.”

Moving to the last weekend in April is also a change from previous editions  of the event, which have been threatened by late winter weather, most recently in 2014 where snow on the course and the expo area at Varak Park in Cambridge forced some last minute changes to the event.  The weather contributed to an 800-participant drop in registration in 2014.

“Late April is better overall. We’ll have a better chance of greater turnout by vendors, sponsors, and participants from now on.”

Now on the new weekend, all races will start and finish in the fairgrounds and will travel on a new course that traverses Southern Washington County.  The iconic features of the course – Meeting House Road in Easton, Stage Road in White Creek, the Eagleville Covered Bridge in Jackson, and Juniper Swamp Road in Salem – will continue to be included as will a number of challenging area roads not used by the event in the past. The event features both amateur and professional races, anopen race gran fondo, and kids races.

For more information, including registration, expo, and sponsorship information, see the event website at www.tourofthebattenkill.com.